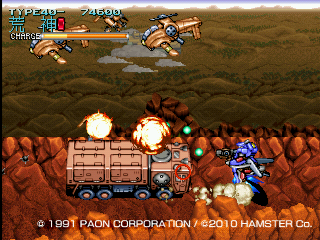 MonkeyPaw’s Japanese import titles have varied in terms of accessibility for non-native speakers. With that said being a retro run n’ gun shooter, Wolf Fang does a bang-up job of being fully playable. Unfortunately, the problem lies more in the game itself than the language barrier. Wolf Fang is the sort of shooter that’s ambitious and original but squanders its immense potential through key design misfires.

This is especially disheartening during the rare moments Wolf Fang feels like it’s on the cusp of being outstanding. While there is some dialogue sprinkled in during and after missions, it’s fairly rudimentary and functionally closer to window dressing, leaving the action to do the talking. The emphasis is on piloting a huge sword-wielding, laser-firing robot through swarms of various other machines.

That admittedly sounds fairly orthodox for the genre but my impression changed before even delving into the actual gameplay. You’re given the choice of selecting a robot from one of several predetermined designs or, more intriguingly, you can string it together from the various parts that compose them. It’s hardly a treasure trove of weaponry but there’s a sufficient number of options to ensure your experience will differ more than by simply picking from stock characters. 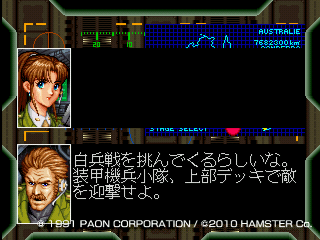 It’s just a shame that the actual gameplay won’t be memorable enough for most to justify experimenting with all the parts. Wolf Fang’s struggles lie in not in the sheer quantity of mechanical adversaries or their barrages of bullets – I embrace such ordeals – but in the generally poor manoeuvrability of the mechs. The developers’ tendency to sprinkle onslaughts of forces on both sides of the screen at unpredictable moments doesn’t help matters either, since the game’s controls and limitations seem to undermine any of the power-ups or weapons placed to alleviate this.
The controls become particularly vexing when you’re thrust onto unfamiliar terrain and then expected to immediately adapt to dodging enemies that unceremoniously target you from unseen angles. All the double jumping and boosting in the world won’t save your colossal hit box mech. A well-designed shooter or bullet-hell game can intimidate you with a lot of chaos but there’s usually a method hidden in the madness. Even on its easiest mode however, Wolf Fang feels like the enemy placement was random.
The game feels as if it belongs in the air as this grants far greater mobility and the on land approach is never properly taken advantage of anyway. The classic Gunstar Heroes handled the run n’ gun premise more smoothly by not advancing automatically and balancing out the number of air and land dwellers to give players a fighting chance. Auto-scrolling 2D shooters are typically more pleasant when navigating an airborne vehicle and, sure enough, the moment the action took to the skies was when Wolf Fang peaked. 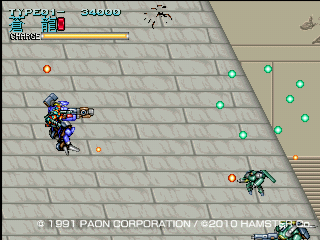 Just about every game has its design blemishes in some form, but when Wolf Fang’s twenty minute ride is over, these blotches define the experience almost as much as the spectacular customisation concept. I don’t expect a three hour spectacle of a retro shooter, especially not for a home console port of an arcade game, but nearly every level ends before hitting its stride.

Any real annoyance from dying during those twenty minutes is circumvented via unlimited continues but this does more to mask the design issues than solve them. If anything, the gameplay is cheapened as a result and feels more akin to a mindless beat ‘em up. The ability to switch parts after dying inadvertently discourages multiple sessions since those frequently dying will get to see all the snazzy parts in a single playthrough.
Wolf Fang’s configurable mechs are still captivating enough to warrant a purchase for the experimental shooting fan but the game often falls short of the dextrous, reflex-intensive shooter that could have been made by actually taking full advantage of the vehicle quirks and advantages in the levels. Fellow import shooter, Kyuiin, better quenches the thirst for fresh mechanics by prioritising one basic concept and nailing it magnificently.