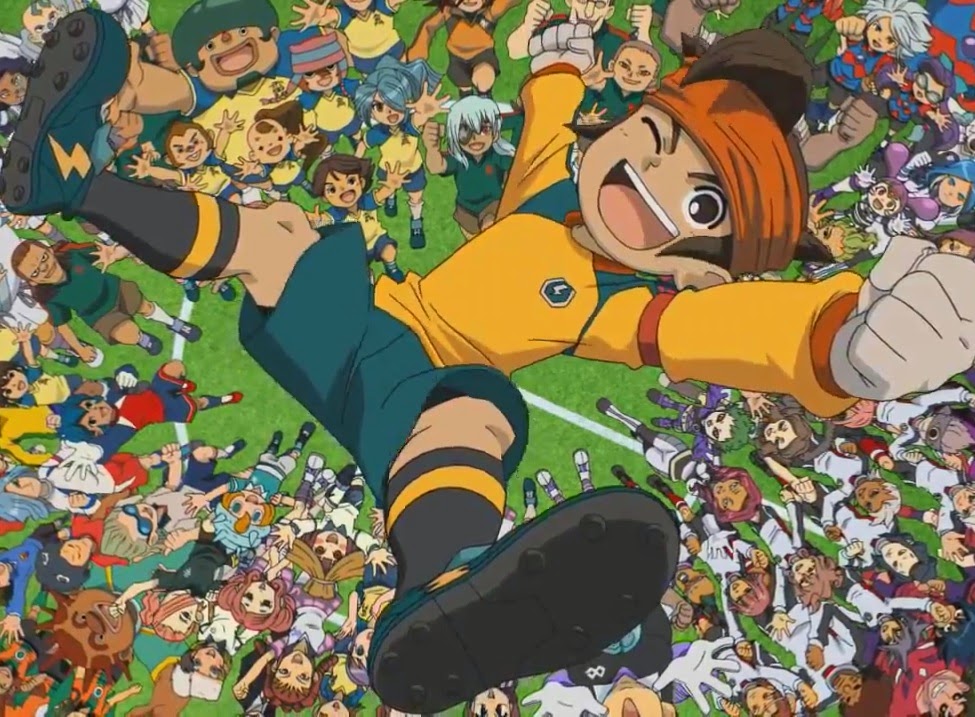 Because I knew very little about the game going in, I had assumed it was a soccer (or football, depending on where you’re from) game of some kind. It’s a story about a bunch of soccer players, after all, and all the screenshots show people playing soccer. Boy was I wrong. Inazuma Eleven is a JRPG that just happens to have a coat of soccer-coloured paint. Taken as a soccer game, it’s a truly terrible experience. With the bulk of Inazuma Eleven’s gameplay being taken up with on-field soccer antics, the fact that the AI is nearly non-existent and any player that isn’t within close proximity of the ball stands around doing nothing does not get the game off to a good start.

Then there’s the fact that the action is controlled entirely through the touch screen, and it’s not exactly a slick system. Player movement is clunky, and there’s no complex passing sequences, through balls or any of the other advanced techniques that people who are familiar with FIFA or Pro Evolution Soccer game would immediately expect in a soccer game. 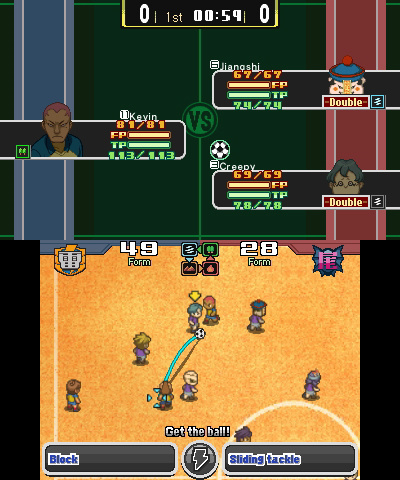 Going in, I was expecting to play it like a soccer game, and I very nearly gave up after the first couple of hours. My team was truly hopeless and the action was dragging. But then each of my players levelled up a bit and started unlocking skills, and suddenly I understood what Inazuma Eleven was really about. Picture a game like Final Fantasy where, instead of using swords to kill monsters, your heroes are soccer players, and instead of killing monsters, they’re kicking goals. It really is that simple; each character has a special ability – the defence players are there to use their skills to absorb the attacks of the opponents – essentially acting as the “tanks” of a traditional JRPG, while the goal kickers are the character types that damage opponents, like black mages or fighters. Only instead of damaging enemy monsters, they’re scoring points by getting the soccer ball to the back of the net.

At first it’s difficult to make the logic jumps needed to stop seeing the on-field action as a soccer game, because despite looking like a soccer game it plays horribly as one, and instead see it as an action-RPG system. Once you’ve made that logic leap, Inazuma Eleven starts to be fun, as you focus on getting better equipment and new skills for your players, and mixing together a team that is able to counter a range of different opponent combinations.

In fact, where most JRPGs allow you to customise a half dozen or so heroes, Inazuma Eleven ratchets things up to 11 by allowing you to customise an entire team. Each enemy team has a different set of skills. Some are faster, others have trick skills. Still others have iron-clad defence, and mixing up your team to counter these opponents is a lot of fun. It could have been more challenging in order to force players to create clever team combinations, but there’s still a great sense of achievement in watching the entire team grow over the course of what is a surprisingly lengthy adventure. 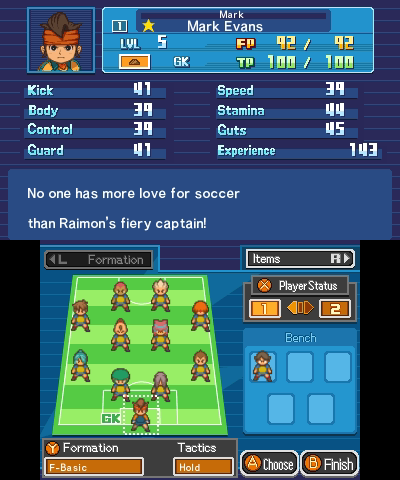 I was quite strongly reminded of Mario Tennis’ Game Boy Color outing of all things. Inazuma Eleven’s narrative, like that game, is very much on point, focused closely on the sport and minimising any distractions or side-narratives. Conversations are short and to the point. It’s obviously a much longer and larger game than Camelot’s early take on the sport of tennis, but Inazuma Eleven feels very much like the spiritual successor to that philosophy towards game development.

That impression is backed up by the visual style. At first it all looks almost too simple, with basic little sprites and bold, minimalist colours. But over time this aesthetic stops being simple and starts being charming. There’s a lot of personally squeezed into these little sprites, and then for the special attacks, the developers take the opportunity to throw in some gorgeous and flash 3D animations by way of cut scenes, just to show they have some technical flair as well.

Inazuma Eleven is by no means a perfect game; I can’t see any reason why it had to be touch screen controlled, nor is there any excuse for why the soccer action itself is so poor. But, as a sport-themed JRPG, it’s a niche kind of game, but an entertaining one.