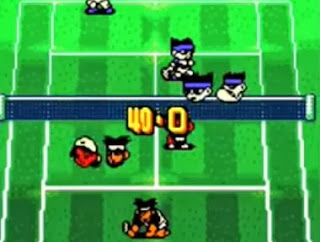 Back on the Game Boy Color, when Camelot was at its absolute finest, it released a little tennis game that showed up most console versions of the sport that have come before and since.

Mario Tennis looks humble in screenshots, but this is a game that I must have spent 100 hours playing back when the Game Boy Color was the bee’s knees of portable gaming, and the experience remains just as compelling now that it’s on the 3DS Virtual Console. Looks can be deceiving, in other words, and this game is still essential even though it’s a couple of generations of handheld gaming old.

Mario Tennis’ secret is that it overlays some light RPG-style statistics into the basic tennis game. Now, we’re not talking about anything earth shattering. Win a match and you’ll get experience points, which can be spent to “level up” one of four categories – accuracy, power, speed, and the spin you put on the ball. It’s such a simple feature on paper but in practice it really does engage with the player and give them a great sensation of progress as they watch their little avatar grow visually in ability. 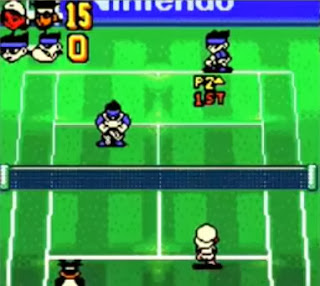 The game’s story is also nothing complex. You’re playing as a young tennis gun that wants to work his/ her way through the ranks at a prestigious academy and become a professional, but again the fact that it’s there gives players and incentive to keep playing.

All of that would be for naught if the tennis action itself wasn’t good quality, but Mario Tennis is a very good quality tennis game indeed. Looking past the primitive graphics, it would be easy to forget that this is a GBC game. The physics are basic, but players have advanced control over the kind of spin they would like to put on the ball, and movement and positioning around the court are more critical for success than you would expect from an old game. Compare this to something like Tennis on the original Game Boy and it’s easy to see the action of this title is many years advanced from that early attempt at the sport. I also appreciated how well the game caters to different play styles. It’s equally possible to play a game from the baseline, or be a net player if that is your preference. Too many tennis games only give players one real option for success, so chalk that up as another victory for this game.

The RPG-like system helps out here too. I like to play a serve/ volley style game, so I focus on leveling up the accuracy and speed statistics, but another player might prefer to level up power and spin to play a heavy-hitting baseline character. There’s even multiple different court types and they all play very differently, keeping a tactical variety in the game from start to finish.

With sports games, it’s generally a bad thing when there isn’t a multiplayer option, and the nature of the 3DS Virtual Console makes multiplayer problematic. But with Mario Tennis, the fact that there’s that RPG-like story mode in place actually compensates for the lack of multiplayer completely, and in fact is a good example of how portable sports games should be handled; developers need to assume that players won’t be playing multiplayer, and therefore need to offer a single player experience that still provides value for money. To this day it astounds me that handheld console sports games play as watered down console ports, rather than offer the kind of unique experience that Mario Tennis back on the Game Boy Color did.

Outside of the career mode the game throws up its only real disappointment; for a Mario sports game, there’s not that many Mario characters to choose between (though there are quite a few minigames that offer a brief diversion from the story mode). The development effort is very much focused on the story mode and the player’s own created character. Considering how disappointing Mario Tennis Open was on the 3DS with its large cast and nonexistent story mode, it’s quite easy to argue that Camelot got it right the first time and should have stuck with this formula, even if it does mean a thin roster besides.