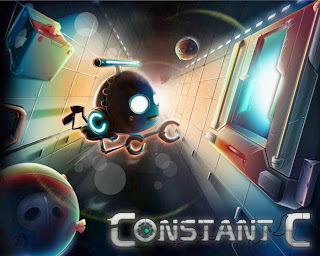 On a remote space station floating just above Earth’s atmosphere, some of the brightest minds have come together for the ultimate experiment: breaking down the barriers of the space-time continuum to open the galaxies for leisurely space travel.

The risks were always high and the unexpected was almost certain to happen, so it comes as no surprise that we find the station locked down in a temporal freeze at the game’s onset. Thankfully, one clever scientist developed a fail-safe in the form of a small Emergency Rescue Robot. You, the player, are this robot. Salvation requires a combination of gravity manipulation, cognitive thought and devious platforming skills – do you have what it takes to survive in Constant C?

My time spent with Constant C was a bit reminiscent to another 2D puzzle platforming title I reviewed last year for the PS3 and Vita: Stealth Inc: A Clone in the Dark. Short-lived levels and deceptive platforming segments are both present and accounted for, not to mention that both titles look and play great too. Yet, like most titles of this genre, Stealth Inc. task you with progressing from one end of the level to the next in succession, with the light narrative weaved throughout. Constant C follows this basic premise as well, but it builds additional layers upon it; in doing so, it makes a difference for the better. 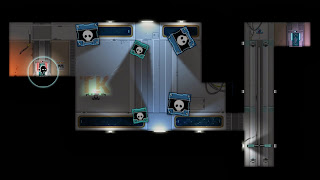 Things start off quite simple in this space station devoid of time. Awaking into this motionless world, you’ll quickly stumble upon and power up the station’s supercomputer – known simply as “A.I.” – with a small storage-data capsule. This charming and witty companion primarily serves as the guide to saving the failed space station, and he quickly puts the game into motion by outfitting the robot with a unique piece of equipment known as the Time Circle. This equipment finds a small blue circle surrounding the robot that when used correctly, breaks objects into motion that it comes into contact with. At first, you’ll be simply manipulating blocks for safe passage, but eventually you’ll be rotating lasers and platforms in some of the most deceptive level designs I’ve come across in sometime.

Once you think you’ve mastered the use of the Time Circle, the game goes off and flips upside down on you, by triggering switches to manipulate gravity itself. Where the Time Circle felled blocks in one direction for use, now they can be manoeuvred in all directions. You’ll grasp the basics quickly, before obtaining the ability to swap gravity at will, which is initially a mind blow of sorts. With objects only moving when in contact with the Time Circle, mastering all of these abilities in tandem allows you to expertly stack blocks in mid-air to create platforms that you can stand upon, flipping gravity to keep a ball rolling under your feet for safety from the laser trapped floors beneath and you’ll even use the momentum gained from riding under falling blocks to propel the fragile robot to new heights once gravity is flipped back mid-flight (err… fall).

2D platforming is a genre favourite of mine and the puzzle platforming titles of late have really matched up with my personal gaming taste. As is the norm, death comes quick and in repetition. Learning to stop and cognitively assess the possibilities before experimenting with the next laser and spike-filled levels contraptions is a must, as the solution is often times perceived to be much more complex than it really is when jumped right into. Still, regardless of how sharp your solution solving abilities are, there’s a level of platforming skill that’s required here that could possibly put off some seasoned gamers. Near instant respawn times and minimal backtracking – thanks to the short-lived level design – keeps the frustration levels below controller throwing, but there are times when knowing what to do is the lesser challenge to actually performing the task at hand. 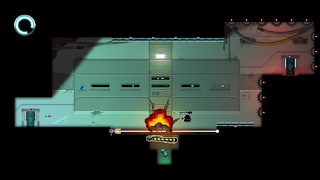 Hang on – didn’t I earlier praise the game for being a “complete package”? Yes, in fact, I did just that. Constant C’s narrative is filled with well-written and witty dialogue that’s cleverly implemented into the game in such a way that it drives you to get past even the toughest of platforming segments. Within the levels, data-storage capsules are scattered about and collecting them not only progresses you forward in the game, it starts unlocking A.I.’s memory banks. These short memory segments take you back into the space station before the temporal freeze occurred and hysterically tells the scientists’ stories behind this experimental project. There’s something to be said for well-written dialogue and what’s here is exceptional. It’s a narrative that keeps you coming back for more, no matter how deep the punishing gameplay starts to bruise you.

To stray away from the risk of spoilers, I’ll just say that the game’s comical (and interesting) narrative starts to flow into the actual gameplay itself a few hours into the game as another character emerges. By this point in time, even as a skilled gamer, the beating and battering was starting to run a bit deep; yet, once again the strong narrative sutured me right back together again. Also, little nuances like background computers and electronic devices activating when coming into contact with the Time Circle and the game’s superbly fitting electronica soundtrack bring the environment to life remarkably.

Constant C is filled with creativity, laughter, deceiving level design and ruthless platforming segments; it’s charming aesthetics only mask the brutality of the gameplay that’s hidden beneath the surface. Those whom prefer the moderate challenge of today’s mainstream games will likely give up pretty quickly, but for those old-school souls like myself who prefer a stiff challenge, Constant C delivers a fresh gameplay concept that beats you down and puts you back together over and again to the end.