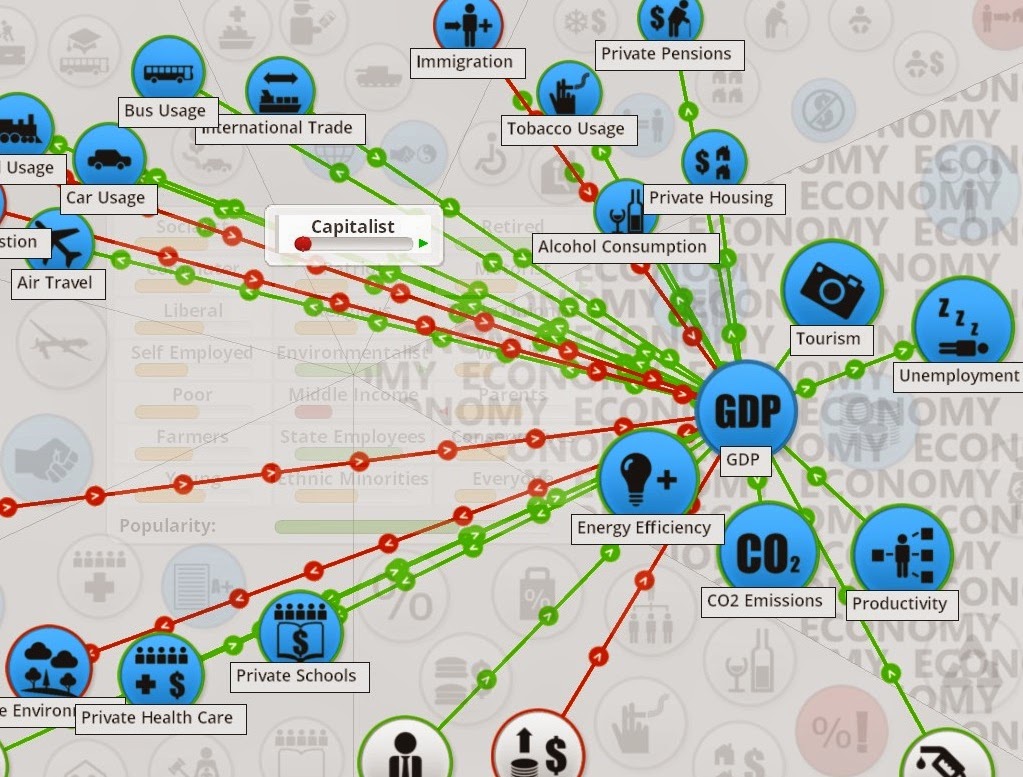 When the people of Australia voted the head of the Socialist Alliance to the top political job, they had no idea what they were in for.

My first act was to mandate that schools taught evolution, rather than creationism. This would lead to an increase in knowledge in the country, and ultimately the nation’s GDP would benefit, but it annoyed the religious folks. Then I abolished certain laws around immigration, making it easier for people to enter the country and upping the nation’s commitment to provide foreign aid (suck on that, Tony Abbott). This had the effect of boosting the country’s international reputation and reducing racial tension (in turn reducing rates of violence). It also ingratiated me with the left wing interest groups, but my support among the conservatives and patriots plummeted.

Then the world’s economy went into recession, and the budget deficit was starting to threaten the nation’s AAA-credit rating. So I introduced taxes on pollution (suck on that, Tony Abbott), luxury goods and property. This annoyed the middle and upper classes, and hit the GDP in such a way that unemployment took a jump, but on the plus side the nation was in a surplus and the low income groups worshipped me like the second coming of Marx.

But then some other social policies around supporting the sciences and legalising prostitution saw my reputation with the conservative elements of society drop to such a level that a few ultra-conservative militant cults popped up. Despite all that I was doing for the people I was assassinated in the middle of my first term of being a prime minister. 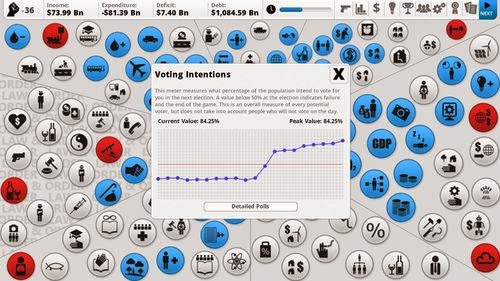 The second time I played Democracy 3 I took a more… moderate… approach to social affairs, and this time around I dominated Australian politics like something that has never been seen before, winning over 90 per cent of the vote in every election. I’m now preparing to run for election in the next (real) Australian election. Stay tuned!

Seriously though, here’s the thing about this game – it’s not the most entertaining of games ever made, but it’s something that needs to be loaded on every student and politics nut’s laptop. It’s not the perfect simulation on how politics work, but it’s a fair abstraction, and it teaches a useful appreciation on how a decision made in politics isn’t made in isolation; it has a fall-out effect on many other areas of political and social life.

At its core, Democracy 3 is a mass of pretty spreadsheets that visualise an intimidating amount of data systems that are all linked to one another. Players will adjust the income tax rate, and then see how it affects his/ her reputation with various interest groups, as well as its impact on the economy. Every decision made will positively benefit some groups, and negatively affect others, and if you’re not careful, and treat any single group too poorly, then you’ll end up with militant cults, internal security issues, and a horrible economy to contend with. 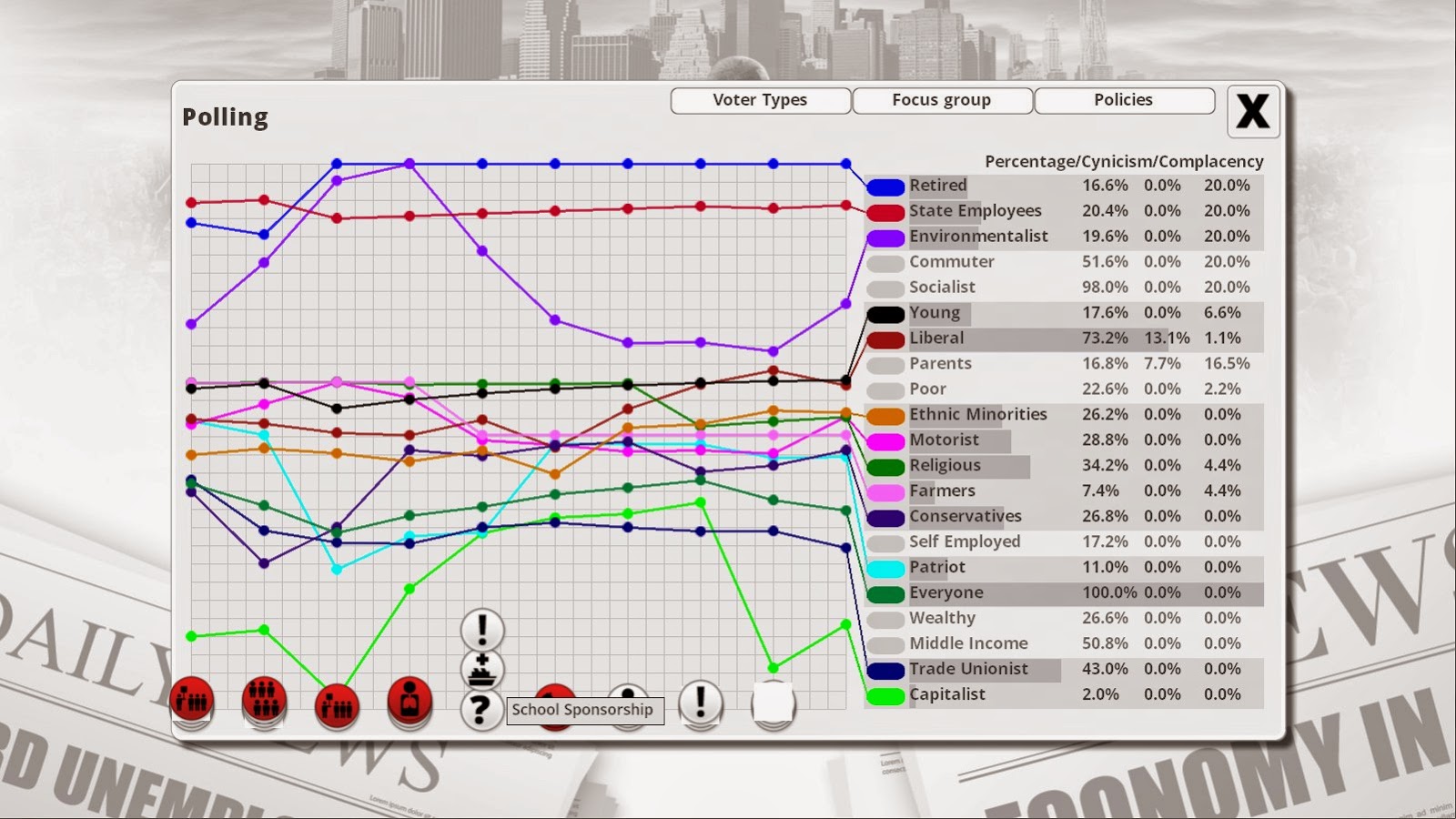 All of this is represented on screen by dozens of bubbles, each representing an area of decision making that the armchair politician needs to consider, whether that be sustainability, economics, social policy, foreign policy, or law & order. Hovering the mouse cursor over each bubble allows you to see which other bubbles it affects, or is affected by it. Some bubbles only impact on two or three other bubbles, others impact on a dozen or more. Clicking on the bubble pulls up a screen where players can tweak just how powerful it is. So for instance, to lower the income tax of the nation you click on the income tax bubble. This screen also shows how much impact that change will have on interest groups – some will like you more for the decisions you make, others will like you less.

So if nothing else Democracy 3 teaches just how dangerous extreme ideology can be. If you don’t appease certain interest groups enough, they will vote against you at the election, and if enough interest groups are dissatisfied with you you’ll lose the election. If you really annoy a group, then an assassination attempt is on the cards. The game itself is fairly politically neutral, though were I a betting man I would guess the one-man development team that created the game is left leaning. The goal here is to incrementally build a better nation while maintaining political collateral and ensuring that you remain popular enough with the people to be returned to office in order to make more incremental improvements.

Every so often the game will also through a couple of moral decisions at you via a regular “yes/ no” policy question that will pop up while playing. Do you allow genetically modified crops? How about animal testing? The consequences to these decisions can also be severe, but they do allow players a little more freedom to follow their true feelings about certain topics. 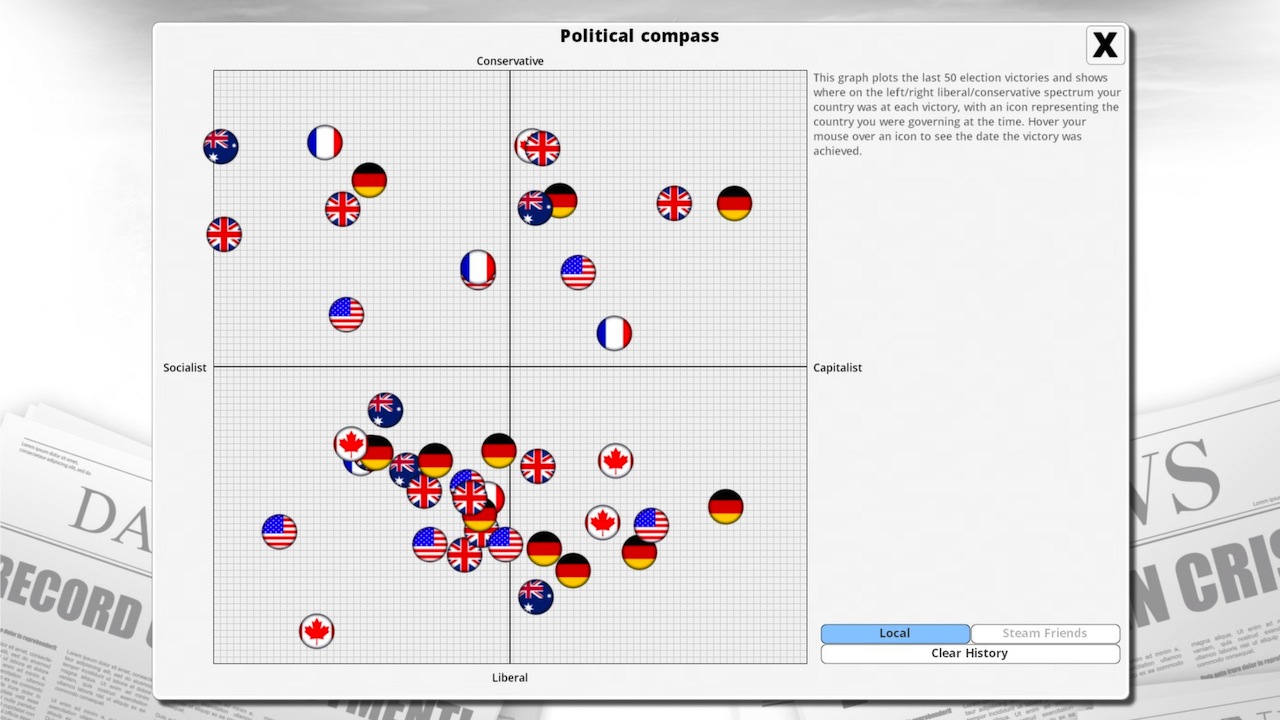 At the end of your political career (and inevitably it will come to an end), you’ll be placed on a standard “left vs. right” quadrant, and quite possibly the best feature about this game is the ability to compare your success as a politician directly with the successes of your friends. It’s a heck of a leaderboard system as it essentially allows people to compare political minds and philosophies with one another and, to go back to my earlier assertion, I think this game can hold real value in school political discussions. Alternatively it’s a useful way to get a feel for precisely where you do sit on the political spectrum, or the impact that your ideas would have at a national level.

Obviously in the real world politics are are far more complicated beast than what we find in Democracy 3, and there’s certain critical elements that are missing. For instance, there’s no structure for budgets to run election campaigns, and so Democracy 3 ignores the importance of propaganda. There’s also no structure in place to deal with the impact of the media, and as we’ve seen in the real world, the media is capable of crippling a Government when needed.

It’s also worth noting that while the game has a couple of different nations to chose between, and each does have its quirks, I didn’t get a strong enough sense that the politics required to be successful from one nation to the next were different enough. Playing as the leader of France made it somewhat easier to be left leaning than playing as the leader of Australia, but the political systems of these countries is vastly different, while Democracy 3 treated them as largely the same. There are some interesting mods in the community that help add that sense of individuality to the nations, which is a good thing. As the name of the game also suggests, the only political system at play in this game is a democratic one, so you’ll need to look elsewhere if you’d like to rule a communist paradise.

Diplomacy 3 is abstract, and so data-heavy that it’s a little dry in terms of presentation. Despite this, it’s also an excellent educational tool, and anyone with a real interest in politics will get a kick out of it.

RollerCoaster Tycoon 4 is coming, it’s iOS-exclusive, and fans might want to look away now