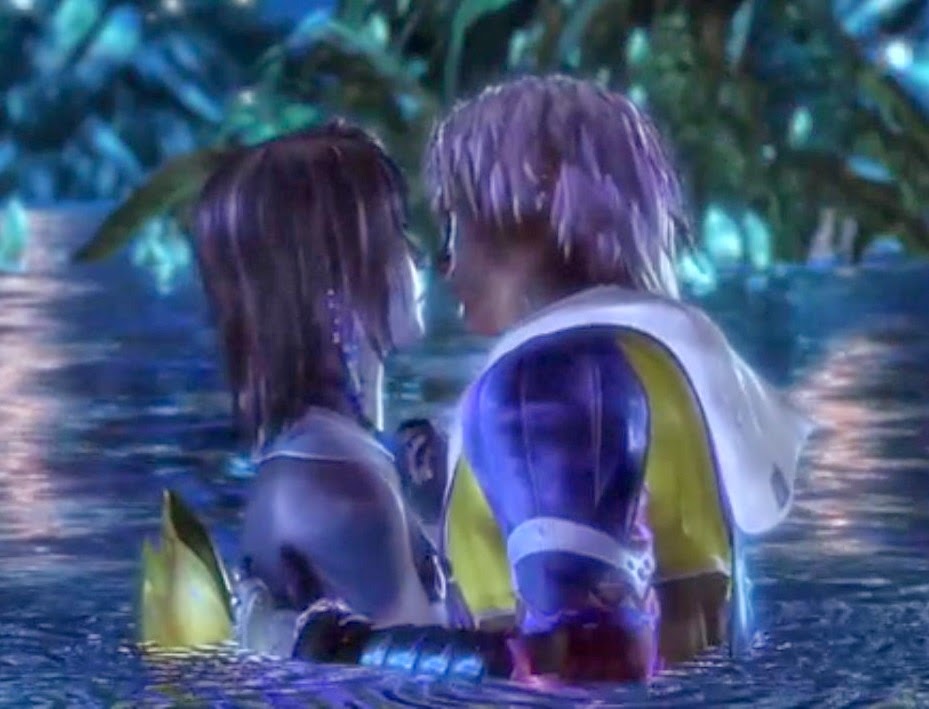 Thematically both games are greatly concerned with the tension between social responsibility and individual will. Both games feature a group of heroes bound together on a reluctant quest that calls for self sacrifice in the name of the greater societal good.

It’s political drama distilled down to a simple essence where left and right can be neatly classified as good and evil. It’s no coincidence that it is a returning theme to the franchise, because the theme itself is a ongoing concern in Japanese society, where the rules of tradition that a person should put his/her society and its needs ahead of their individual desires is being challenged by the young generations as they grow into adults. The challenges faced by the heroes of Final Fantasy X and XIII is metaphor for the challenges facing young people in modern life in Japan. The difference between the games is while Final Fantasy X tells its story through the context of a simple, emotionally-loaded narrative, Final Fantasy XIII is more loaded with high-level thinking that many interprete to be philosophical nonsense.

So it makes thematic sense that Square Enix would choose Final Fantasy X and its sequel X-2 to receive a HD remaster on to the PlayStation 3. The work done to bring these games into HD is decent, and if the effort restores a little faith in the franchise amongst fans who were upset with the path that Final Fantasy XIII took, so much the better. 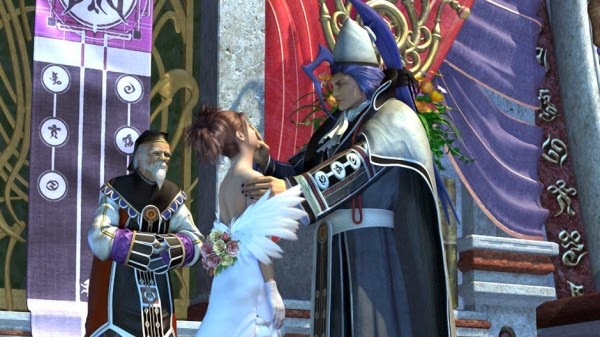 The thematic similarities between Final Fantasy XIII and X transfer over to some of its gameplay elements too. As with XIII, Final Fantasy X is a strictly linear experience where most of the time players will walk down a straight path killing enemies before running into a cut scene, a boss battle, and the next corridor to run down. There are some towns spaced in between corridors, but these are largely linear experiences themselves. By the time the game opens up properly, it’s almost the end of the game, and there’s not much reason to travel back to earlier corridors except for additional loot and optional bosses.

This linearity is never allowed to become boring, however, because the developers had a well-justified confidence in both the narrative that they were telling, as well as the combat system. Enemy encounters are randomly generated in a quaint throwback to the old way that JRPGs are done, and while it’s difficult at first to adjust to such an archaic system, the turn-based combat is a brilliant change of pace to the action-heavy modern JRPG that is increasingly becoming the standard. Players have the ability to form multi-turn strategies in order to deal with difficult bosses, and it’s generally an enjoyable system; I greatly enjoyed the opportunity to go back to the way that Final Fantasy games used to be played. I quickly found myself falling into a comfortable rhythm where I would take battles one step at a time, figure out the bosses’ weakness and then work out how to keep my team alive while exploiting that weakness.

Even the battle music that plays after a victory is a  remix of the early Final Fantasy victory tunes; yet another wonderfully nostalgic touch that long-term fans will appreciate. Complimented by some truly spectacular new music from Nobou Uematsu that serves as the perfect highlight for the game’s more emotional moments, and this is the kind of game that you want to be playing on the loudest volume that your ears can handle. If I was to pick any flaw in one of the most incredible soundtracks ever made, it’s that the music is offset somewhat by juvenile voice acting that at times clashes with the touching story that the developer wants you to believe in. 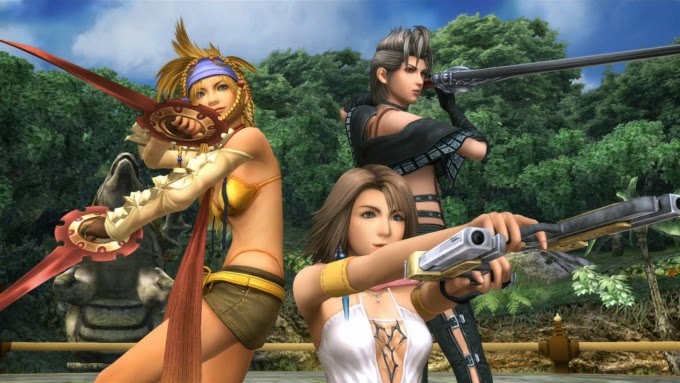 As good as the music is the game’s levelling up system is its true highlight. Upon every experience level, each character gains a “point” which can be spent on a massive grid of skills and abilities that allow for a surprisingly deep level of customisation. Essentially, while each character has a clearly recommended path (For example, the leading lady Yuna is pointed in the direction of being a healer/ summoner, while one of the supporting characters, Rikku, is predisposed to be the party’s thief), there’s no rule that insists that you take on that role for that character; it’s possible to take the character down a different path on the grid. At first the game’s levelling system seems a little overwhelming, but it is without a doubt the most complex and rewarding one that the series has ever offered.

One that levelling system is mastered it’s a matter of kicking back and being immersed within a traditional fantasy with chocobos, romance, and massive difficulty spike bosses towards the later half of the game. There are moments that are truly touching, and because the game follows a steady path there are constantly new environments to explore and experience. As epic as the quest is, however, I continue to have issues with HD remakes in general. Taking a game and improving the resolution while taking it widescreen is fine, but as a result everything looks awkward; character models are more blocky than in a game made for this generation, and animation looks a little more stiff than it should. Final Fantasy X’s art direction is nearly without peer, but as a technical project this is many, many steps behind, say, the Final Fantasy XIII games, with their impossibly detailed characters and textures.

The other game in the Remaster package is the sequel to Final Fantasy X, X-2. At the time of its release this game was a curiosity as it was the first time that a game in the franchise had a direct sequel. I think some of the subsequent disappointment that people felt about the game (and the poor reputation that it developed as a consequence), is due to it being so incredibly different to the original. 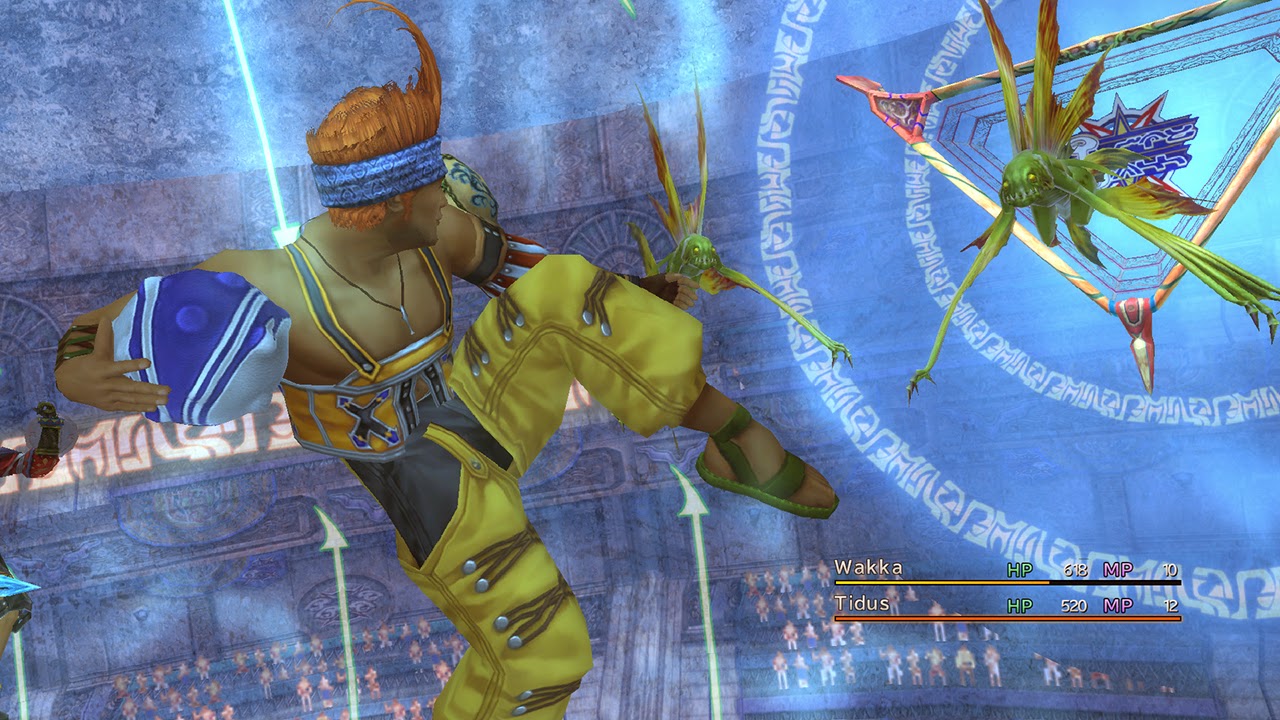 Where Final Fantasy X was a touching and quite serious narrative, X-2 is almost as far on the other spectrum as possible. It’s light-hearted, has a sense of humour, and is more overt about the fanservice than perhaps any Final Fantasy game before or since. The game focuses on three female characters, and be default the leading protagonist, Yuna, swaps the flowing, elegant dress inspired by the Japanese kimono that she wore in Final Fantasy X for hotpants and guns. One of her supporting characters, Rikku, already wore hotpants in Final Fantasy X, so the developers apparently needed to strip her down to a bikini for the sequel. That change of tone is initially confusing, coming straight from the very serious Final Fantasy X, but over the course of both games the contrast is a nice way to see different sides of favourite characters, as well as the world itself.

Then there’s the dress system. In what was surely a precursor to Final Fantasy XIII’s games, characters in battle will change their clothes in order to adopt new abilities. So a white mage will wear one thing for healing party members, a thief will wear something different. These classes can be changed between one another at will, allowing players to change up combinations of character roles to suit the situation that they’re in at any given moment. It’s a dynamic, exciting, system, and while it’s slower than what we saw in Final Fantasy XIII’s games, it strikes a good balance between keeping players on their toes, while allowing them to be strategic about the way they play.

Ultimately the irreverence of Final Fantasy X-2 means that the quest isn’t as memorable as its predecessor, and while it’s good fun, it’s also not something to play on rotation. But combined these two games are incredible value, and a great alternative to the XIII series on the PlayStation 3 for people that were put off by those more recent Square Enix games.