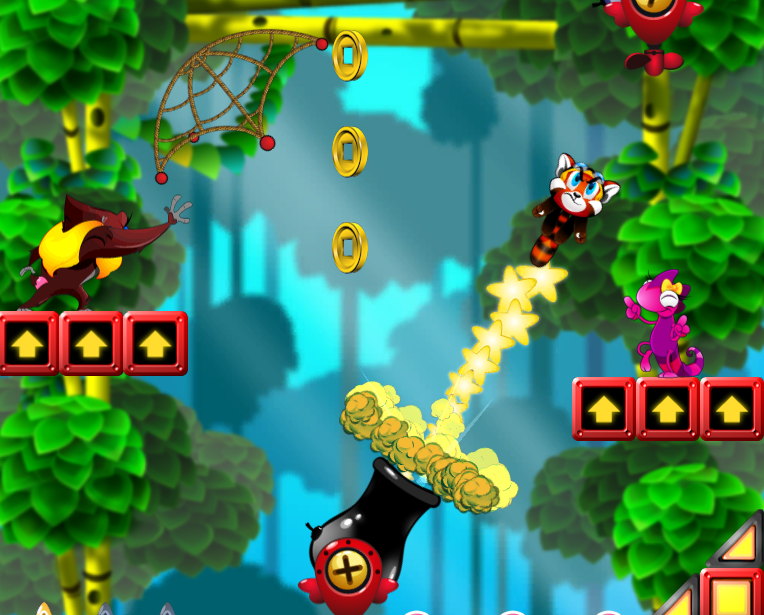 Skyjoy is a newly-formed independent studio with some lofty ambitions indeed. It’s aim is nothing short of producing the Mario of the mobile gaming industry.

That’s the ultimate dream of the team who are hard at work creating Super Kid Cannon; an adorably cute platform/ physics puzzle combo that draws heavily on the idea of a scrolling upwards platformer like Doodle Jump, but refines the action by designing the levels, rather than relying on random placement of objects.

If Super Kid Cannon left things there it would be a standard enough game with nice visuals, but there’s a unique touch to this game; it’s also got some pinball-style physics in there, with the primary way of moving through levels being through shooting the lead character out of cannons.

It’s a fairly unique game concept and it certainly has the presentation values to match, so the big question is can the team at Skyjoy achieve what they’re looking to achieve and create something that has the impact and influence of their sources of inspiration?

We’ve sat down and had a chat with the three founders of Skyjoy; Alex Portilla, Abboudi Taher and Miguel Portilla about Super Kid Cannon and the team’s longer term strategy.

Digitally Downloaded (DD): What inspired Super Kid Cannon?
Alex Portilla (AP): We grew up on classic Disney movies and I’d spend hours on the Mario and Donkey Kong arcade cabinets. As a kid, Conan The Barbarian and Super Mario were in the same vein to me; those characters were my childhood heroes. We wanted to take all those memories and create something reminiscent of that. When we started, the first question we asked was “How can we make something that’s just as memorable and great as those classics?” 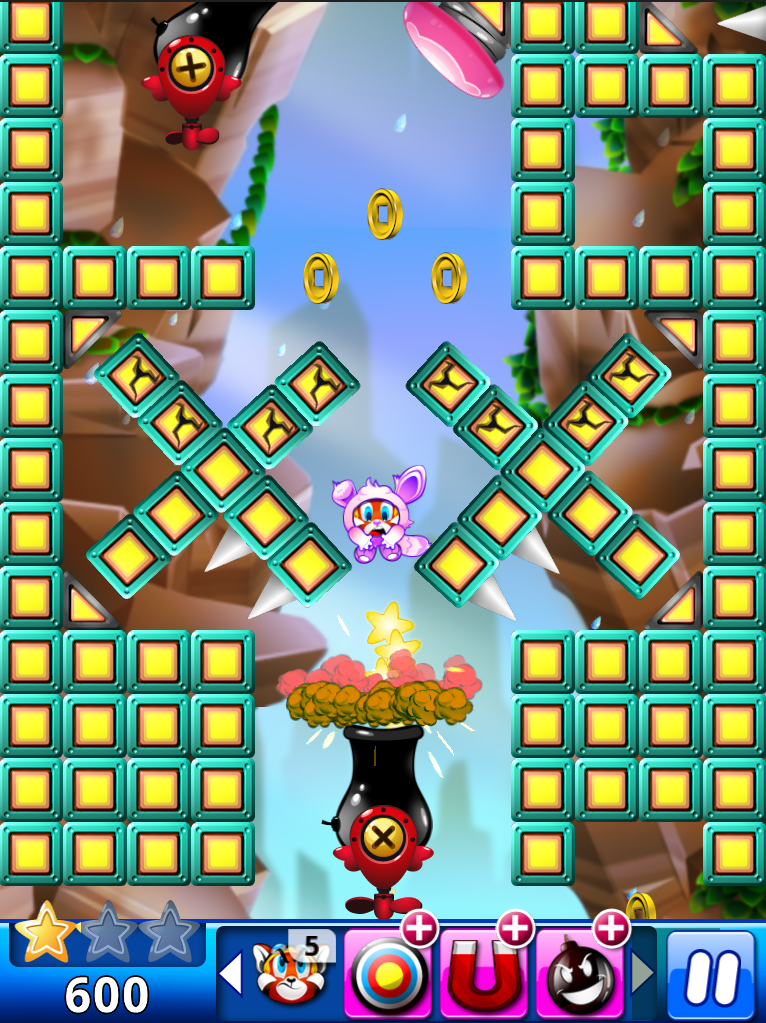 DD: From the video on your website, it looks to me like a game that’s something of a mix of pinball (in the way the hero bounces around the levels) and upwards scrolling platformers like Doodle Jump. Is this how you would describe it?
Abboudi Taher (AT): People seem to have this misconception of our game being like Doodle Jump; the game is not a randomly-generated endless runner by any means. We handcraft all the levels, and put a lot of different gameplay mechanics and play styles into each one of them. In general, you’re moving from cannon to cannon to reach the end of the level. But we’re constantly mixing it up. Along the way, theres completely different obstacles, vehicles, and enemies. You could be riding a bubble past net-throwing baboons in one level, jumping out of ski lifts into a geyser in another, or even riding a spaceship! There is always something new.

Miguel Portilla (MP): Describing it as a pinball is a good comparison though. Super Kid Cannon is 100 per cent physics-based. When you shoot SKC and he bounces around, it does kind of have a pinball feel. The physics of the game, the way he shoots and bounces around the world is really fun.

DD: Why have you decided to release this game on mobile?
AT: We are actually releasing on iOS, Android, Windows Phone and Amazon Kindle. They are all great platforms and they’re easily accessible to the public. The game is specifically designed to take the most advantage out of the screen’s shape and the touch screen.

DD: Do you see potential to also port it to other platforms in the future, such as game consoles? Which consoles would you consider?
MP: Definitely, I think the game would be very compatible to the Wii U or the Playstation Vita because of their touch screen features. The way we’ve designed the gameplay, its pretty much open to any touch-based systems that could arise in the coming years. You could say we’re ready for the new generation of gaming. 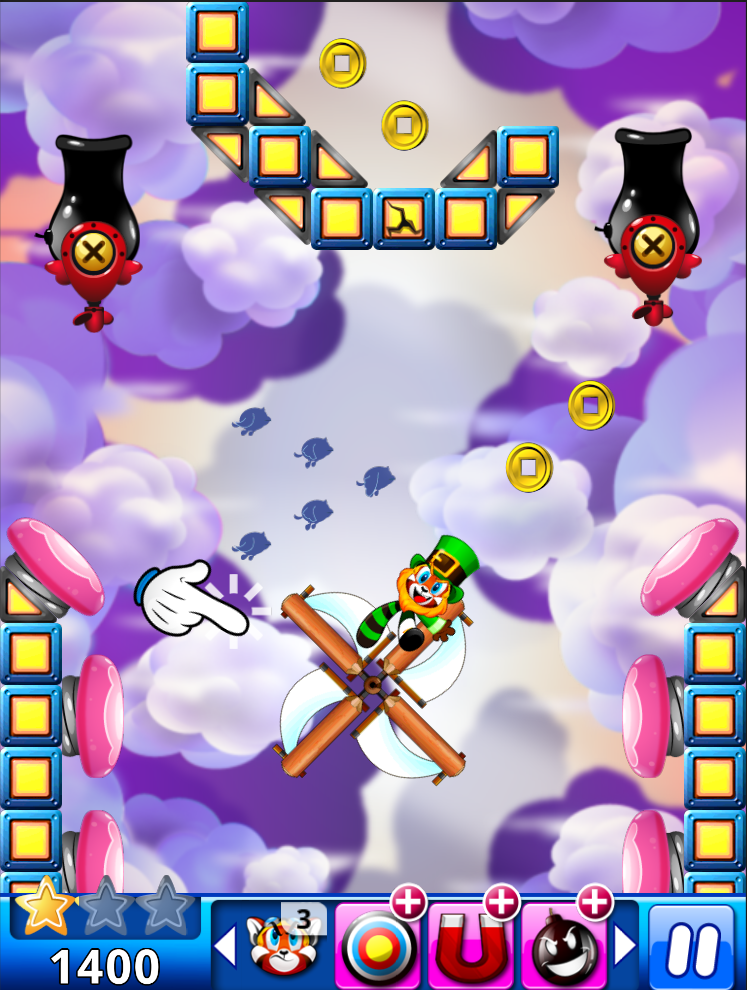 DD: Your game obviously relies heavily on its charming visuals and lead character. Could you explain for me the process by which these were developed?
AT: We wanted to follow in the footsteps of The Godfathers…Not Marlin Brando and Al Pacino! We mean the godfathers of the gaming and animation industry: Nintendo and Disney. We wanted to create something along those lines; something that can be visually appealing to people of all ages.

AP: The process of creating the characters went through a lot of changes. We began with concept art, then sketches and slowly over time it began developing into what it is right now. If you see the first SKC you’d be shocked at how much it has changed. One of our key goals was getting the characters to look, act, and play a certain way that shows a Nintendo or Disney polish.

DD: In your promotional material you make an immediate connection to Nintendo’s Mario character and games. What made you decide to do that? I would have thought it would be risky to compare a game to something as classic and beloved as that franchise?
AP: We did it as a homage to Nintendo, they were our direct influencers. Yes, it was risky but it has paid off. We have received a lot of compliments and positive feedback, we want SKC to become the Mario of the mobile gaming industry.

DD: This game is Skyjoy’s first project. What are some of your longer term goals for the studio?
AT: Our goal is to get some great new game franchises out there, establish ourselves as a powerhouse in the mobile gaming industry, and a major one is to Kick Ass! That’s our motto – we start every day with our daily motivational Kick Ass meeting to encourage everyone. They are a group of extremely motivated, talented people, and knowing that is why we have the confidence that our studio is on the up and up. Another goal we are aiming for, is to expand the video game industry in Miami, Fl. This city has a lot to offer and we believe there’s no reason why a thriving gaming industry can’t grow here. 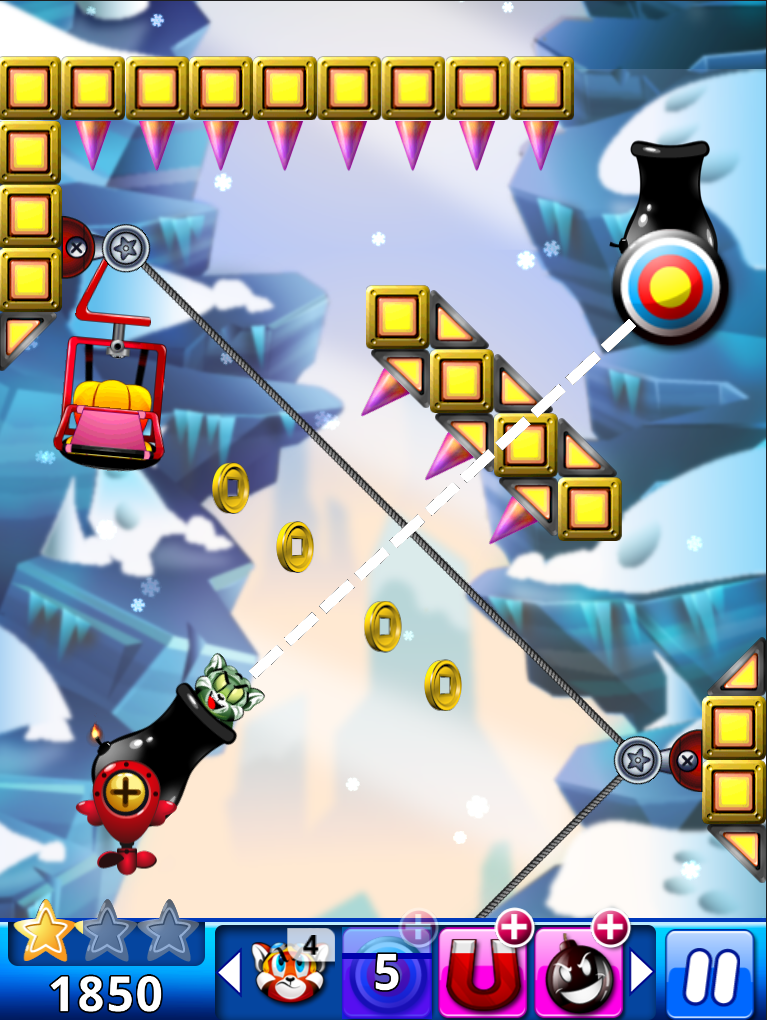 DD: What encouraged you to set up your own studio?
MP: Having our own video game studio has been a lifelong dream for the three of us, we are passionate about video games. Actually, we do have, as a prerequisite, that everyone on our team needs to be a gamer and we make sure to test for that. We occasionally have Street Fighter and Mario Kart tournaments during lunch! Not to mention I can tell you from experience, that a lot of these guys can hold their own in an intense round of League of Legends! I mean, we love video games, through and through; from making them to playing them.

DD: What advice would you have to anyone else who is also looking to get into game development?
AT: If it is your passion, follow it; start coding games if you like it, drawing if you are an artist, or even mod or hack your favorite PC game. It’s never too early, and the internet has so many resources readily available for free. You need to start as soon as possible; find what you’re passionate about and if you really want to pursue it, there’s nothing stopping you.