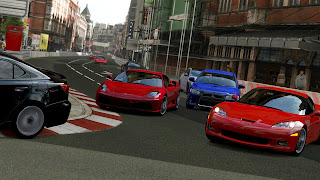 While I am a fan of racing games, I don’t tend to get hooked on them quite as much as Gran Turismo 6 has hooked me in… and the reason is the cars.

GT6 has 1200 cars or thereabouts, and that means the “stable” of cars that you’ll built up are uniquely tailored to your personal taste. That, in turn, means you develop an attached to your cars.

So for me for instance, once I acquired the Maserati, I didn’t look back… but I bought a bunch of Toyotas and BMWs anyway. And because these were the cars that I selected to race, I couldn’t help but watch all of the replays… especially when I did something slick like weave between two opponent’s cars around a tight bend.

So just for the sheer heck of it I pulled together this little video, which shows my racing, and then shots of the replays. Nothing spectacular or anything, but an easy Monday video.

And if you have a PlayStation 3, but haven’t picked up GT6, then hurry up and do so! And then let me know your PSN name, so we can race against one another!


Are you a fan of artistic games? We’re Kickstarting a book that you will simply love!
Share this