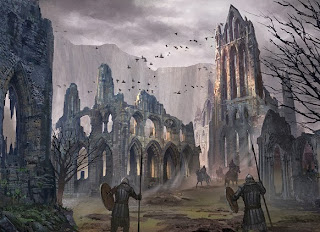 Playdek is best known for its digital board games and the occasional weird card game. So you can imagine my surprise when it took to Kickstarter for a truly ambitious project – a full-fledged RPG, featuring the involvement of Yasumi Matsuno, no less!

I was surprised, but not worried. The Playdek folk understand how to make quality games like few others, so I have no doubts that this will be a roaring success.

Matsuno is well known to anyone who enjoys Japanese games, of course. He was the mind behind Final Fantasy Tactics, Vagrant Story, and my personal favourite Final Fantasy game; XII. His involvement in itself makes this project worth following, but, even if he wasn’t named in the credits, who couldn’t get excited by this:

Unsung Story is an exciting turn-based, tactical war simulation RPG that plays across a great epoch, through individual story episodes. YOU, the player, research and explore the vast history of this conflict that nearly tore Rasfalia apart, by reliving past battles and political events.

Your viewpoint into this series of intertwined history varies from battle to battle. In one fight, you may command a group of knights protecting a great empire, while in another scenario you may lead a group of revolutionary soldiers, made up of commoners, who are fighting to topple the same empire!

Battles take place on a 3-D landscape, with an immersive player controlled camera, while episode and scene selection is made through a detailed 3-D world map. Units that you command are profession based, and within each profession are multiple classes.

The character professions, replete with individual classes, provide you with deep game mechanics that you can mold to your individual play style, and adapt to the scenario at hand. You will build your front and backlines by combing these classes into various groups or parties, based on the needs of the battlefield.

So check it out, and if you’re a fan of classic tactics RPGs, be sure to back it. While you’re over at Kickstarter, don’t forget to back our own project, and get the personal stories and insights into the art of video games from some of the most creative people working in the industry right now.