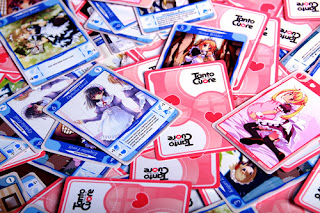 I worry for whoever came up with this idea for a game. Tanto Cuore is a card game all about collecting maids.

Yes. Collecting. Maids. Somewhere in some dude’s (I’m sure it’s a guy who invented this game) mind the idea of having a game entirely about recruiting a harem of maids was appealing. Lucky for us, then, that as strange as that guy’s mind is, the game itself is actually a load of fun. And so here I find myself playing with maids at all hours and enjoying myself immensely.

At its core, Tanto Cuore is a deck-building game, very similar to something like Dominion or Ascension. For people who haven’t played these games in the past, they are highly strategic games that are very easy to learn. Players start with a small deck of ten cards – most of which are resources. They use these cards to “buy” additional cards, and then they reshuffle their cards into a new deck with these additional cards in them. Each of these additional cards offer special effects. For instance, one card might let you buy two cards in a single turn, rather than one. Another card will “attack” another player causing them to lose points. 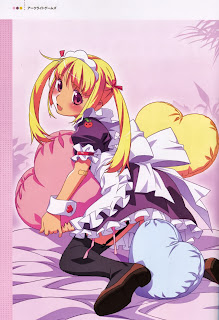 After about 20 minutes of play or so the game finishes and the person with the most points is declared the winner. Because there are so many cards to pick up and add into the deck there are a wide range of strategies that can be undertaken in Tanto Cuore, and finding your personally preferred strategy is a matter of a lot of practice and trial and error. The game is incredibly well balanced so that there isn’t one single “best” strategy, and while the variety isn’t quite as strong as we find in a game like Dominion, for a couple of dollars Tanto Cuore is many, many hours of play before the strategy begins to become stale.

An efficient tutorial gets you into the game quickly, and then there’s the standard range of play options; Vs. AI, pass-the-iPad multiplayer and online multiplayer. For online play the signup process was a little broken and took me longer than it should have, and once I finally got in I found it hard to get a game going. I guess there aren’t many people out there with iPads that are that interested in playing card games about maids. Once I did get a game going it was nice to discover that it’s asynchronous, meaning I didn’t need to sit down for an entire game in one sitting.

As with most card games it’s better to play against other humans, so it’s a pity the online community is so dead so soon after release. The local multiplayer is still good fun, but for some reason I could never convince someone to play in public with me. 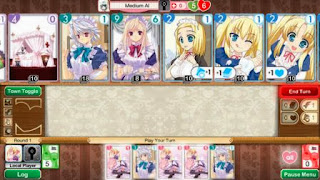 And with that we move to the bit of the review I know you’re all keen on: how are the maids, right? The cards all look great, but if you’re not a fan of the semi-sexualised anime style, then it’s best you don’t get too involved in the game. Of course this is a real card game and all the developer, Playdek, has done is accurately capture the physical card’s art style, so it’s not really a reflection of the development process that the game has the presentation that it does.

It’s not really that over the top anyway, and the compelling gameplay quickly makes you forget what, specifically, you are playing. Of all the card games available off the Apple App Store, Tanto Cuore is perhaps the nichest and so the online community for the game is far too low. Which is a pity because if the community were stronger, this game would be essential.

Last chance! Vote for your favourite games of the year!