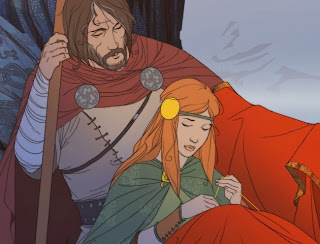 The sun has stopped in the sky, creating an endless winter in a land that was ravaged by war. Towns that were once trading hubs are now being attacked by an undead army, and it’s up to the men and women in your caravan to stop them.

The Banner Saga tries to combine both a game and a novel together; so naturally a lot of effort has been put into the narrative and if you’re willing to invest a lot of time into understanding everything that’s going on in the world, and invest yourself in its lore, you’ll have a blast. Personally, I was unable to get too into it. Considering The Banner Saga still has two more games in the series, it will be interesting to see how the story progresses. Your choices made in every conversation apparently will change the course of the story by the end of the third game… which given the background of the developers in question (ex-BioWare folks), is entirely believable. But, if you are like me and the story doesn’t click for you, you’re still going to stick around for the combat. 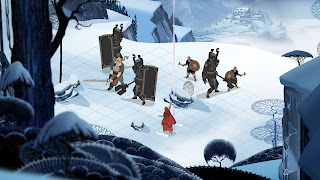 The combat system is similar to the grid-base strategy titles such as Fire Emblem and Final Fantasy Tactics. However the Banner Saga brings new elements to the table. Battles consist of two factions fighting against one another. Instead of moving your entire team though, units move one at a time, alternating between the two sides. It leads to interesting battles, especially in the free-to-play multiplayer version of the game. Unfortunately in the single player game that AI is a touch on the predictable side and this opens up all kinds of opportunities for exploitation.

All units also have two health bars; armour and strength. When a unit’s strength hits zero, they fall and can no longer fight in battle. Armour acts as a defensive state. The weaker a unit’s armour gets, the more damage they take. What’s interesting is that the attacker gets to choose which statistic to attack. Choosing which stat to attack becomes crucial, and as you learn quickly, the longer it takes for you to get a unit’s strength down the zero the harder you will find battles.

Two different races are found within the units that you can control. The large giants known as the Varls takes up to four spaces on the grid board. They are also heavy hitters and they’re abilities reflect this, being able to knocks enemy units back, and swing their sword attacking all the units that surrounds them. Humans only take up one space on the grid, but can wield a wide array of weaponry, bows can attacks from a great distance, and spears can attack diagonally. As you progress further into the game, deciding on the number of Varls and humans in your team becomes very important in building an effective strategy.

Adding to the strategic elements is the inclusion of willpower. Willpower lets you increase the power of your attacks. Each willpower increases attack power by a certain amount, and can be used to bolster both armour and strength at any time. Willpower can also be used to move further than your character usual. Although it is a useful element to battles, as a limited resource using it at the wrong time can easily lead to defeat. 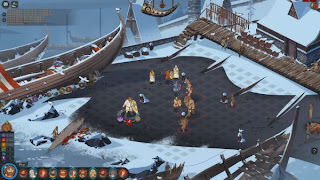 Outside of battles you have to manage your caravan. As you oversee the caravan it grows with soldiers who wish to join your cause, people who have lost their homes through the enemy raids. Each day that passes on your journey uses up supplies. Additionally, resting (which is important in sustaining your morale), uses a full day’s worth of resources. Lacking supplies to feed all of the members of the caravan results in morale dropping, causalities increasing, and willpower is also affected. This management side of the game is a slow-paced counterpart to the combat, but if not managed correctly it can harm your adventure.

Quite a number of the comments that I have read about The Banner Saga have been on its art style. It is a very beautiful game. All of the character models and landscapes are hand drawn, and they are wonderfully complemented with the subtle and realistic animations. The soundtrack is also incredible to listen to. It was composed by the same man who made the music for Journey and being fully orchestrated it adds wonders to the experience you get from playing the game.

If you read my preview of the game late last year, there were a few things that didn’t click with me about The Banner Saga. Yet playing through the full game, I wasn’t noticing those issues as much. They’re still there, but I was able to look past them. You can see the BioWare design influences heavily, and it’s nice to see the focus shift to the overall story of the world and grand conflict, rather than individual personal stories. It creates a vast story that will change every time you play it, and your choices are surely going to play a part in the next two installments. But, yes, if the story and art style doesn’t interest you, then the combat will absolutely draw you in.