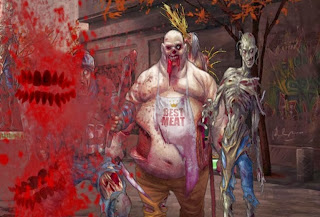 The Walking Dead is a monumental staple of modern culture. The effects have seemed to reverberate throughout almost every medium with zombie stories being even more common now than they were before. While I don’t know if Overlive – Zombie Survival RPG was directly influenced by the success of The Walking Dead, I don’t think it’s any surprise that developers are finding zombies a very marketable idea right now.

Overlive is the story of a man or woman who has survived the initial stages of the zombie apocalypse. However, when you meet them, they don’t have much memory of what went on. The game requires you, the player, to search around and discover what happened. The story fairly complex, bringing in stories of the Illuminati and sick experiments that had led to the destruction of society. You have 180 days to escape the city from hordes of zombies and a military force that intends to keep you trapped within. Within each section, you have 14 hours to find the right path through to unlock a way out of the city, with some tasks relying on chance to see whether you need to waste more time on the section, offering a real sense of urgency to ensure you find a way out of the city. 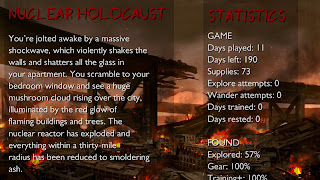 Initially, I have to admit that I wasn’t very taken by the story but after a few day’s play, I realised it had become strangely addictive. For such a simple game where the only action is shooting and beating zombies with a baseball bat or a hammer, it drew me right in. Sometimes the hordes of enemies become too much, wounding you enough that you have to retreat and waste days of time resting to recover your strength or training to be able to try again to move further through the game. When that happens it means that you won’t be able complete everything that there is to do, which is going to really irritate completionists.

It’s really tough to talk about Overlive without talking about The Walking Dead game. They both want you to bond to your character and want you to want them to survive. But I didn’t find myself caring about the character here. There wasn’t the narrative strength of The Walking Dead to back the game’s reliance on its characters. To be engaging zombie films, TV shows and games need to have characters that are capable of exploring the nature of humanity, and stick them in intense situations where the sheer intensity makes you care whether they live or die. That intensity is lacking too; in Overlive a character can get bitten and scratched and oozed and hacked nearly to death and all they need to so is sleep for a couple of days. There is no real consequence there.

While I have some issues with this game, it is still strangely addictive. The game is meant to be played over and over again, finding new methods of survival. At $1.99, it is definitely worth the cash though don’t expect it to be as fulfilling, shocking, or dramatic as other zombie games.

Love Games? Love Art? Back this Kickstarter to get a great, hardcover book!