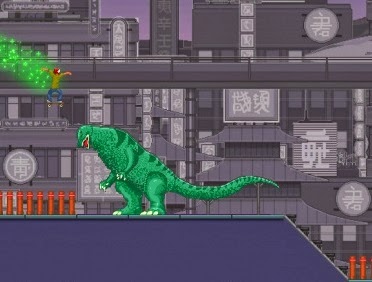 OlliOlli, given to us by indie developer Roll7, is the perfect mix of challenging yet rewarding gameplay that is replayable enough to work through the levels over and over again.

OlliOlli is very simple in its design, yet it’s this simplicity that makes the game so enjoyable to play. When the left stick if flipped, the character jumps in the air to perform tricks. Landing a trick with X gives the trick a final rank, and the score is calculated. The aim of the game is simple; get the highest score possible.

There are 50 levels to play through, each having their own unique challenges. Getting to the end of the level without wiping out unlocks the next level. Completing all the challenges also unlocks a pro level, an even harder level to complete. Each level also has a corresponding Spot course, which presents you with one chance to travel as far as you can only relying on jumps and grinds. All of these levels are perfect for the pick up and play style OlliOlli is designed for.

The most appealing aspect to return to the game day after day is the Daily Grind. Similar to the daily level in Spelunky, a new challenged is released everyday. It can be practiced as many times as you please, but as soon as you attempt the challenge for real you have one chance to get the highest score possible. One mistake will see your high score crumble and you will have to wait another day until you have a chance of redemption. What better way to keep people coming back for more than to stroke the competitive fires? 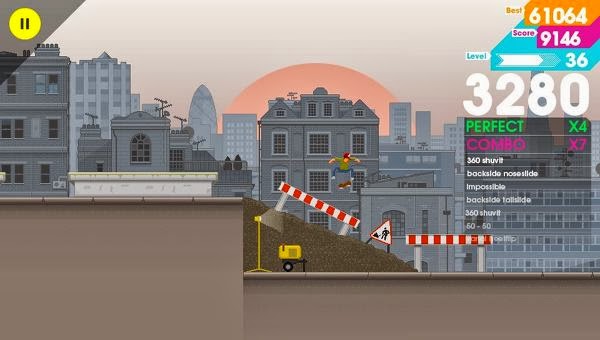 Where OlliOlli adds difficulty is the obsession to get the highest score in the level. A single miss-timed landing, or a late jump can ruin a perfect run. And at no point is it at the fault of the game or its very precise engine; every failure is yours and when you see your skater ragdoll over the pavement you feel bad for not being up to the task.

And OlliOlli wants you to get the highest score possible. The “Tricktionary” includes every trick that you can pull of in the game. It also introduces elements through the tutorial that get the ground running with ideas on how to increase your score. Time your landing on rails to get a perfect rating, spin around in the air in-between grinds. It’s the experimenting that will see you replay levels, trying to improve on your scores with more complex sequences of tricks and climb your way up the leaderboard.

The presentation brings home the message of simplicity. The menus are designed around the touchscreen, and you can easily start playing one of the levels with a few taps. The best part about OlliOlli is the arcade feel that you get from each level you play. The scrolling background, graffiti cement walls to grind on, totaled cars to jump over. It’s the little touches that you notice that makes it even more enjoyable.

It’s a shame that the capabilities of the Vita aren’t used to their fullest potential during the gameplay. OlliOlli could have been released on any device. For the asking price though, OlliOlli brings a bundle of fun that encourages players to come back every day for new challenges. When a game nails the gameplay this cleanly, everything else that OlliOlli gives players is icing on the cake.

UPDATED: Nintendo outlines its strategy to resolve its business challenges