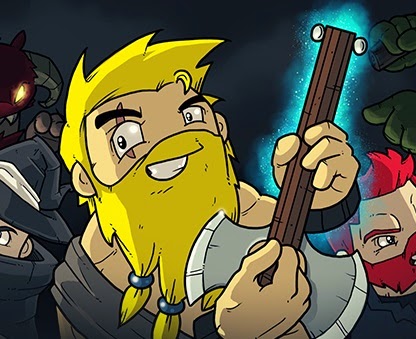 Ever wanted to quit your day job and become a rockstar? TreeFortress’s newest iOS game, Bardbarian, offers players a chance to do just that, except your day job happens to be your village’s first line of defence. With your trusty axe-lute, you’ll rally up a bunch of soldiers to defend against a generic wizard’s army of goblins and other standard fantasy fare.

Despite billing itself as a genre-bending title, the gameplay in Bardbarian feels distinctly familiar. You move with a virtual joystick like a top down shooter, summon units like an RTS, protect a crystal from being destroyed like a Tower Defence and build your character like an RPG. Genre-bending games tend to challenge players with innovative and unfamiliar gameplay experiences, which unfortunately Bardbarian doesn’t provide. It does, however, offer a solid experience based upon elements of existing genres so seasoned gamers will instantly feel comfortable the game’s elements.

Like all good strategy games, Bardbarian gives a lot of options for players to use. Over the course of the game, the bard can incite archers, warriors and mages to fight alongside him through the power of rock music. They automatically follow him around the game’s field, dealing damage to any enemies in their range. In addition to summoning a variety units, the bard can play a songs which cause effects on the battlefield. Defeated enemies also drop gold which needs to be collected and the townsfolk can be upgraded to leave recovery items around the map. This leaves the player with lots of different tasks to consider and a variety of ways to tackle the challenges set before them, which is fantastic. 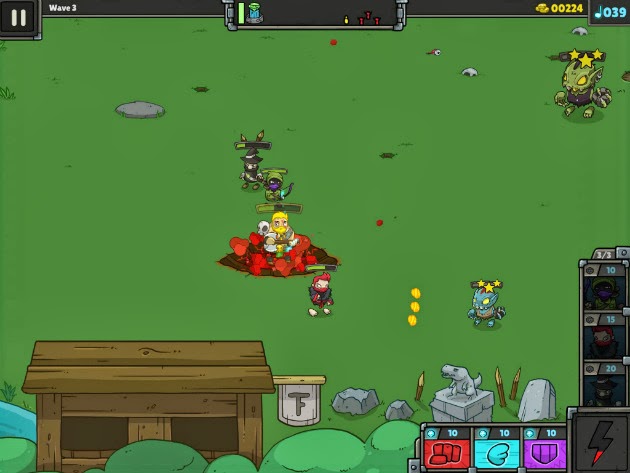 Unfortunately, the variety in the strategy is not reflected in the shooter gameplay. A flat, featureless plain will be your battlefield for the entire game and it quickly becomes tiresome. Enemy patterns are well designed but are nothing special, and avoiding attacks becomes tedious due to the numerous party members you’ll have to account for. The boss fights work in a similar fashion, and it’s unfortunate that they are so simplistic since the hybrid shooter-strategy system feels promising.

Bardbarian offers twenty levels and an endless mode, with varying enemy waves throughout. Unfortunately, the difficulty increase is bound to a curve which forces players to use the game’s upgrade system to progress. Players can pass the first five levels rather easily, but after that your units will no longer deal substantial damage to enemies, whose attacks are now able to down you or the town crystal in one hit. Just about everything is upgradable with the money you pick up from defeating monsters so eventually your party will be fearsome enough to advance to the later stages. It’s just that you’ll have to grind the early ones several times until you’ll even stand a chance against the later ones, and this gets tiring quickly. Players can purchase a golden lute through a microtransaction which doubles money drops, and this can substantially improve the experience. It does feel a little cynical however since it means TreeFortress understands the flaws of their game but decides to charge players for the solution.

As with some other casual games on iOS, Bardbarian is a solid title which asks for too much commitment from the player. Considering the saturation of games on the App Store coupled with the sheer amount of titles most gamers already have on their iPads, one would expect a shorter, more condensed game to be superior than something dragged out for the sake of value. While Bardbarian’s gameplay isn’t innovative, it’s tight enough to warrant your attention. The game would have been far more enjoyable as a shorter, five hour title but as is, getting the upgrades needed for progression can take twice that long, and that’s more patience than a lot of casual gamers should be required to have.