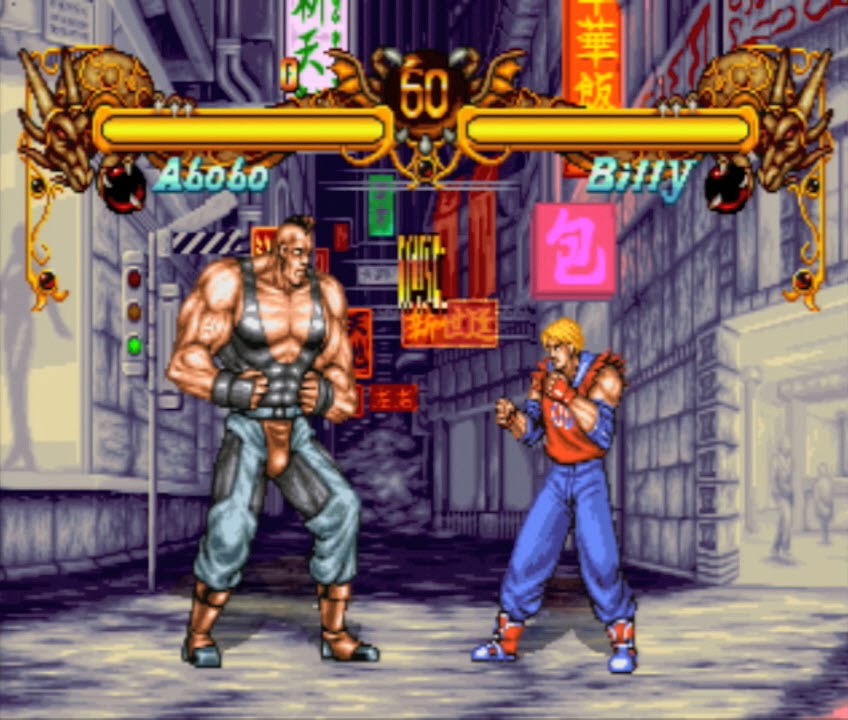 I am a long standing fan of the Double Dragon series. How far back do I go with the series? I remember dropping many quarters into the arcade machine. The introduction and end fight music are still among my absolute favourite in all of video games. I immediately get his with a bout of nostalgic flashback as soon as I hear it.

I enjoyed the NES port of Double Dragon, despite the lack of simultaneous two player action and got good enough at it to win in a single life while building up all of my skills in the first level and finding glitches like picking up a weapon and ‘morphing’ it into something else then taking it into a stage it did not belong.

Double Dragon II was an NES title I beat more times than I can count. I played other iterations over the years as well, including the ridiculously hard Double Dragon III, some of the remakes and I was among those who thought Double Dragon: Neon was a lot of fun when it released on the PlayStation Network.

Now that we are clear on my history with the game, I just wanted to state that this newly released Double Dragon PSOne Classic has basically nothing to do with any of the above titles. While the rest of the series is a traditional beat ’em up style of game, this Double Dragon is a Street Fighter clone through and through. That in and of itself is not a bad thing, as I am also a big fan of fighting titles and have been playing Street Fighter regularly since the second game in the series became an arcade hit.

The problem with Double Dragon is that it does very little to differentiate itself from other fighters on the market. It handles fine, with a dozen characters (two of which are hidden boss characters), with a local versus mode to go along with a couple of other minor modes. Probably the most unique of these modes is the “3D” mode, which does not live up to its name at all. I actually started laughing at how primitive that mode is so loudly that my oldest daughter came in from the living room to see what was so funny.

Essentially this 3D mode lets you use the bumper and trigger buttons to move the arena around on X and Y axis, spinning and tilting the game around like a cube. Everything in the field of battle is decidedly 2D however, with flat cardboard cut outs of background elements (such as cars and signs). The fighters are also flat, creating some comically impractical fighting views that serve as an amusing novelty for a few rounds. 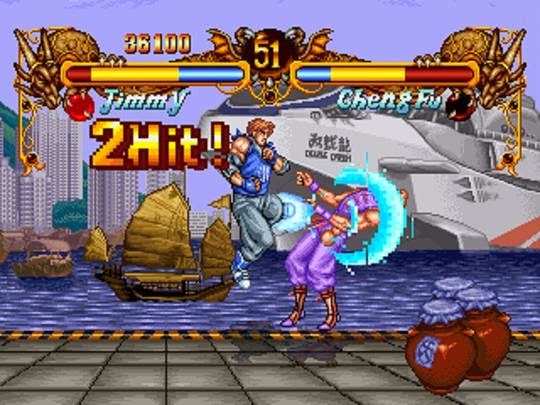 Of course, this is an older game. How old? 1995 old. I never got to play this one as it was only released in Japan and appears to be very loosely associated with the awful Double Dragon movie that came out all those years ago. I have to say loosely though, because only a handful of characters that were in the movie are actually in the game and the physical similarities are completely lacking. As much as I adore Alyssa Milano, I never really understood her character’s appearance in the movie and it certainly did not translate over to this title’s version of Marian.

So what about the game itself? I already commented that it played pretty well, and called it a Street Fighter clone, which is pretty accurate. Billy for example does what amounts to a Hurricane Kick if you do the backwards quarter circle. Jumping uppercut? Street Fighter fans will recognise that move’s input as well. There is a charge feature that does allow your characters to go into a hyper mode that deals plenty of extra damage during that time. Characters are large, fluid and actually look pretty good given the age of the game. Backgrounds are also surprisingly bright and detailed, with pleasing bits of movement. For example, a stage where you are fighting in the water and it ripples around the combatants’ lower legs.

Never having had a chance to play this title originally, I cannot compare the original to this release, but there is no localisation effort to report on. It is a fighting game, so you can figure things out pretty quickly, but if for some reason you are interested in this game’s story, you will come away very disappointed as the between scene dialogues are all still in Japanese. The main menu has been translated to show you modes and options, but within those windows the options and memory card screens are still in Japanese as well. Thankfully MonkeyPaw Games was kind enough to set up this page, which helps to ease the transition.

I had fun with the game, but I do not hide the fact I am a bit of a sucker for all things Double Dragon. That being said, this is not the strongest entry out there that the series has ever seen. It is not a bad game by any means, if you are a fan of fighters from that era. It would fall squarely in the middle of the pack in areas such as visuals, audio, number of characters and so on. My guess is however, Double Dragon is not going to appeal to a broad audience, but only to the most hardcore of franchise fans as it is quite a departure from everything else in the series.

Don’t forget to reserve your copy of our awesome art book by backing our Kickstarter!

Kickstarter Update: Techland to participate in our book!