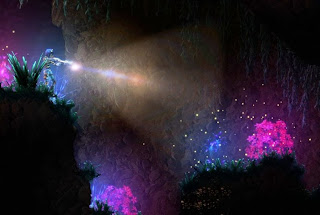 Impressions by Mike B.

Darkout is a game that partially comes from the crowdfunding scene. Although development team Allgraf was very close to completing the beta of this game prior to its crowdfunding campaign, the Indiegogo campaign is what propelled the game from being largely unknown to something that caught the eyes and ears of the curios. However, unlike some other crowdfunded games, there has been absolutely no discussion about Darkout since its release in early December. I’ve seen no one praise, criticize, or even be intrigued by Darkout. To me, this signals one of two things; either Darkout is extremely mediocre or the public simply can’t care about it. And after a successful crowdfunding campaign it was always going to be unlikely that the public didn’t care about it.

Darkout is best described as a Terraria clone mixed with the atmosphere of Metroid. The player is spawned into a procedurally-generated 2D world with minimal resources and given the task of surviving the mysterious, darkness-ridden planet they crash-landed on. Like most Terraria-esque games, the player is given no in-game guide or wiki interface to rely on, initially helping the ‘Alone In A Hostile World’ vibe. The game’s detailed and generally unpleasant artwork also helps the atmosphere, easily making it the strongest component of the game. 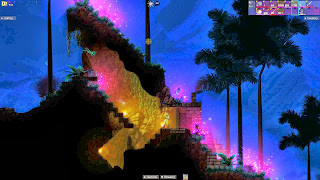 Darkout also is burdened by the same problems that its inspiration has though. The biggest similarity is that it can easily take hours to get anywhere substantial for both beginner and veteran players. While I completely understand why this time investment is present and even crucial to the overall game design, the fact that it is needed at all is a crutch which can easily hamper a lot of people’s enjoyment, mine included. Darkout also has the Terraria problem where it doesn’t try to ease new players in at all. Another problem originating from Terraria is that Darkout has no clear or acknowledged end-state, at least from all that I’ve seen. Of course, Terraria has a big following, and that same community will not be fazed in the slightest by Darkout’s issues, but they bear mentioning for anyone who wasn’t caught by the Terraria bug.
And even then those who adore Terrariamight not like Darkoutsimply because the game is simply not as refined as its predecessor. In favor of an extremely blocky and uneven world, Darkoutuses a more natural and more realistic terrain smoothing technique. While nice-looking, this technique also affects the hitbox detection for deformed terrain, making player-made tunnels buggy and hard to navigate. Crafting is clumsy and handled oddly with the sorted interface being organised but inelegant to navigate and every recipe requiring the first set of crafting items to be wasted on “researching” how to make the end result of that recipe. Interaction is simple as placing torches can seem impossible at times for its imprecise controls and entity interaction requires specific cursor placement. All that said, the resource collecting mechanics such as digging and collecting wood/plants, with the ability to dig three blocks at a time instead of one being was a very welcome addition. 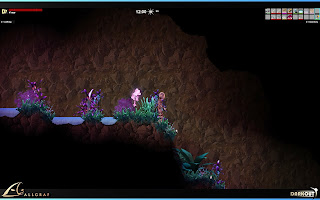 On top of all of this is the fact that Darkoutappears to still be in development despite being released. While there is no, “In Development,” or, “Early Access,” banner atop the game’s store pages, there are various stages of development that are have been laid out as a plan. And these stages list some very significant game elements that would dramatically change the gameplay of the title, such as vehicles, fellow survivors to interactive with, and most critically, and end game. While I don’t feel justified stating that this is a ploy from the development team to try to get from sales from those weary of incomplete titles, it is very questionable that Allgraf is selling a fraction of what their grand vision for Darkoutis supposed to be without any true guarantees that these features will ever happen.
Overall, I got the impressions that Darkoutis a Terrariaclone only meant for those who would appreciate a Metroid-esque atmosphere and can tolerate many imperfections. Darkoutis flawed in many ways and does not address the larger problems that its genre contains. While I appreciate the different tone the game takes, that does not rescue it from its problems and the questionable nature of how the game is being presented to its audience. While it’s true that Darkoutmay become better as the players time investment increases, I personally was not motivated enough to continue to invest more time into the game.