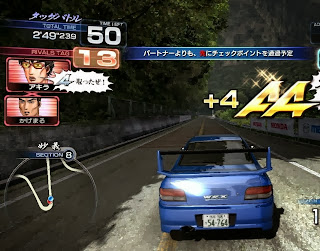 Nintendo and the mobile gaming industry; it’s a conversation that continues unabated. But while many will continue to focus on Nintendo, its once bitter rival, SEGA, is about to unleash a new strategy on Nintendo’s 3DS that holds the potential of being a runaway success: the service’s first free-to-play (F2P) title, Initial D: Perfect Drift Online; and in doing so SEGA is bringing the essence of the mobile markets to Nintendo’s console.

Speaking to Famitsu and then reported by Siliconera – Sega’s Toshihiro Nagoshi, whom is known primarily for his involvement with the Yakuza series, said “In Japan, the most widely used handheld device is definitely the smartphone; but following that, it is definitely the Nintendo 3DS.”

With the recent explosion of the F2P pricing strategy on the mobile markets, for many it would seem that it would be a wise decision to bring it to the handheld gaming consoles as well. But, there are differences between the two markets: traditional console consumers are used to paying a premium for consoles and its games, while mobile consumers are typically used to paying a premium or subscription payment method for a multi-functioning device, with small multi-transactions for apps (including games) thereafter.

Simply porting these same F2P titles over to a consumer base that’s looking for a different end-user experience is no guarantee of success and Nagoshi addressed this in the interview; “I understand that the market is different, but on the other hand, I believe that everyone is aware of that, and that’s how the Nintendo 3DS has kept going on without having to release F2P titles,” he said. “So, I’d like to try it out, and see the results for myself. As a game creator and producer, I’m very interested in seeing what happens.”

One only needs to take a look at the F2P titles in the PlayStation Vita’s library to see that quick cash-in titles aren’t always catch with dedicated console gamers.

Nagoshi and SEGA are taking a risk with this game, something he was keen to acknowledge, but the company is throwing a lot of chips on the table with the F2P strategy; SEGA isn’t stopping with Initial D: Perfect Drift Online.

Fans of the Initial D anime series will undoubtedly have fond memories of drifting through night courses against others in the arcades in years gone by. While it would have been easy for SEGA to just port those beloved games over to the 3DS eShop (which it should do regardless) it’s good to see new games as well, and it’s intriguing to see what microtransactions will do to the gameplay.

“When there’s something special that you’d want, you can purchase points to get it, it’ll work like that,” Nagoshi said. “You’ll also be able to accumulate those points in the game by simply playing it.”

How will Nintendo console owners react to a title such as this releasing on the 3DS eShop? That is the question of the hour. While Swapnote, Flipnote on the DSi and now Miiverse have all shown is that Nintendo’s consumers do like free stuff, at least in terms of non-gaming apps. These services clearly show that this consumer base is willing to dig into new things that are offered up freely. Then consider the success of titles like Gunman Clive that show that this same consumer base is willing to drop down a few dollars on small titles, without seeing them as a ‘lesser’ option on the service. So does this paint a positive picture for a F2P game which gently pushes people for a small monetary investment?

Miiverse could be a help here. Assuming the game is good, people who sign into Miiverse could potentially see a load of fellow players that they have on their friends list chatting happily about their experience, and from there be inspired to give the game a try for themselves. With F2P games, the biggest hurdle is getting people to download it in the first place. From that point onwards there’s a genuine opportunity to sell the microtransactions. So Miiverse’s community can easily act as a marketing arm for the game by encouraging people to jump over that first major hurdle.

Initial D: Perfect Drift Online is slated for a winter release in Japan. There are over 13 million 3DS units in Japan at present, and that means the numbers are there – given that only one per cent of players (if that) generally spend money on microtransactions, profitability does rely on a big install base for a F2P game to work. If SEGA chooses to bring this (and future) F2P titles outside of Japan, its all-important potential consumer base expands exponentially, finding it easy to think that they will start drift our way starting sometime next year.

So what makes this a “brilliant” product strategy? The brilliance is in the simplicity and the fact that it will give SEGA a genuine early mover opportunity in being the only F2P provider on a platform with tens of millions of players. Time will only tell if Sega will hit the jackpot with this new business venture.