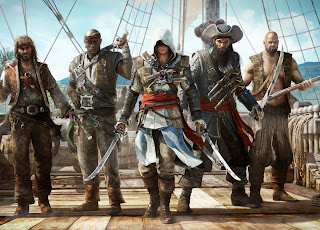 I loved Assassin’s Creed 3. I realise that’s a controversial statement to make for the fans of the earlier AC games, especially considering that I wasn’t a fan of the series until AC3 (at all), but the trip through early-era America was for me a revelation.

Assassin’s Creed 3 nailed something that as far as I’m concerned the previous titles didn’t; the history. As someone who didn’t know much about American history, Assassin’s Creed 3 had me clicking through Wikipedia on more than one occasion, filling out my knowledge on the people, places and events that was occurring within the game. Of course Ubisoft took liberties with history in order to make a game worth playing, but just as Tecmo Koei adds an atmosphere of authenticity to it Warriors games by basing them off history, so too did Assassin’s Creed 3, where the history was so central to the experience in a way that felt far more rich and detailed that the previous European assassin adventures.

So when it came time to play Assassin’s Creed 4, I was excited like no other AAA-game has managed to do for me all year. Unlike my American history I do know a great deal about the great era of piracy and privateering in the Carribbean, and the chance to rub shoulders with my favourite historical pirates and privateers and go on grand looting adventures through the ocean was something so appealing that I was willing to overlook the fact that the game needs to sell many millions of copies to be successful and therefore was never going to take too many risks in terms of the gameplay itself. 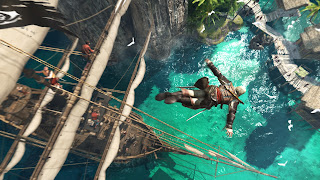 It opens with a tense battle on the high seas, in the middle of a storm. Cannonshots crack across the ship and enemy ships start to sink. Then a classically-dressed assassin leaps on board and my hero, whose name I’m still not entirely certain off, finds himself in the ocean.

Cue brief cut scene as this hero remembers why he’s out there on the ocean – he has a wife back home and wants to make her a load of money. Then the hero wakes up, swims to the surface of the ocean which is now littered with debris, and then heads for shore. The assassin, too, escaped the carnage and is washed up on shore. He attempts to flee, I chase, and eventually catch him and kill him. My hero puts on the assassin’s costume, runs into a merchant ship and beelines to Havana, where he is subsequently pulled into the classic templars vs. pirates story, filled with all kinds of twists and turns but centered around a man, whose name I discover to be Edward, who has a far more simple desire, and that is to make a bit of cash.

This opening sequence all happens very quickly, and this concerned me somewhat at first. One of the things I enjoyed about Assassin’s Creed 3 was that it wasn’t afraid to take its time with the narrative, and Connor was the better realised character for it. Early on Assassin’s Creed 4 is so focused on the action and driving players to their next objective that Edward remained a rather empty shell, described minimally through a bit of text background buried in the menus, and characterised solely through a “Welsh” accent that sounded remarkably like Australian Chris Hemsworth as Thor. I didn’t necessarily mind this as I have a mancrush for Thor, but it’s safe to say I wasn’t actually that engaged with the story through its opening few hours. 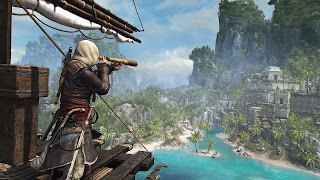 So I wasn’t actually having much fun to start with. Havana was a nicely realised city, but didn’t feel as rich as the environments of Assassin’s Creed 3, and thanks to the lack of characterisation, I didn’t actually care that I was in this very famous historical city. The good news is that over time Black Flag picks up. Edward becomes an increasingly likeable character, the historical figures start to show up and leave their mark on the world, and the other locations around the place each bring their own personality into the game, making Havana a unique and exotic location to return to. I found myself deeply engaged in the sailing and ship-to-ship combat, and the maps were so filled with shiny icons to visit and explore that I could forget about the main missions for hours at a time.

That’s just as well because when it comes to the main missions, the only real new feature is the ability to leave feedback after completion, and I found myself leaving a great many 1, 2 or 3 star ratings out of five. It’s not necessarily that these missions were out-and-out bad, but rather it’s the simple reality that I’ve seen them all before. I broke into enough heavily fortified outposts in Assassin’s Creed 3, that doing the same thing to the Spanish in Assassin’s Creed 4 has lost some of its excitement. Playing through, it’s easy to see that Ubisoft is now starting to struggle in giving players a new look at the sneak-and-pounce style that has so defined this series to date. It all works well, but I wonder whether long-time fans of the Assassin’s Creed franchise will start to feel burned out on this kind of game. 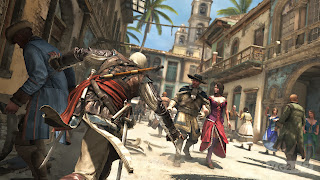 The ship battles that make a return from Assassin’s Creed 3 are vastly expanded on and improved in Black Flag, however, and there’s some nice simulation elements involved in making sure the ship is battle ready enough to take on the big military ships that you’ll eventually come up against. Ship sailing is almost by definition a boring career as 99 per cent of a sailor’s time is spend twiddling their thumbs and watching a vast, empty ocean go by. The challenge for game developers is finding a way to make the act of sailing engaging over the longer term. Ubisoft has done a good job here and I think it’s fair to say that this is one of the best games ever developed in which sailing is an important feature to the game.

I was also impressed with how much work has gone into improving the presentation of Assassin’s Creed 4. While an open world game is always going to feature some bugs, this is a far more seamless experience than its predecessor, and yet if anything the environments are more rich in detail. The cities are perfectly recreated to historical accuracy and running around you get an immediate sensation of the humid heat that was a part of daily life on these islands. Some game elements broke the immersion in a way that was probably unnecessary; for instance there were “dancing girls” (prostitutes) around almost every corner that were conveniently placed so Edward could hire them to distract the guards in a nearby Spanish official building. 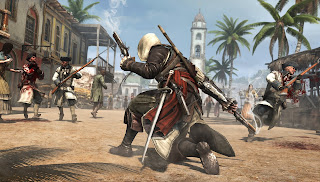 But it’s impressive that Ubisoft has got this series to the point where I am able to focus my disappointment on something as minor by the occasional reminder that I am actually playing a game. So much work has gone into it to create a space that looks and feels historically authentic that I find it rewarding to just be inside the world. Sure the combat hasn’t really improved over the years and the insistence on wasting development resources on a useless multiplayer mode continues to irk me, but what Ubisoft have absolutely nailed is the simple reality of open world games; give players something interesting to explore, and they’re going to be happy. Black Flag is interesting.

While I do hope the series now has a rest for a year or two to give the creative folks a chance to regroup and come up with new ideas, now that the Assassin’s Creed series is happy to hop around eras and settings I’m looking forward to where we’ll head next for the inevitable continuation of the battle between templars and assassins; Shanghai, perhaps?