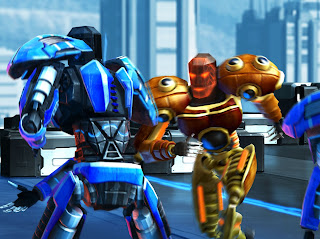 Preview by Mike B.

Frozen Synapse is a title that is heavily regarded among the Digitally Downloaded staff. It’s such a simple concept, but executed to a level of precision that we rarely see at any level. The player plans the movements and actions of a small unit of troops which after finalised play out against the actions of enemy forces within a five-second period. When that time interval is over, the player can reevaluate their plan of attack and change their soldiers’ movements and actions to fit the current situation. The game system actively encourages a metagame reiteration of strategy, making tactical planning as exciting as when that strategy is executed successfully.

Frozen Endzone, the follow up currently in beta, retains the systems that strategic richness, but currently has us a little worried; there doesn’t seem to be the same level of tension and subsequent satisfaction from planning that is so core to the original Frozen Synapse game design. 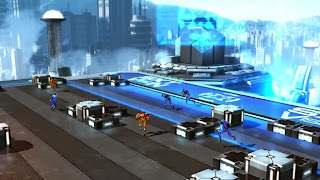 Frozen Endzone takes the turn-based, top-down planning mechanics from Frozen Synapse and re-works them for the sport of American Football. In practical terms, this means that all the various troops from Frozen Synapse have been replaced with unarmed, American football-playing robots. This also means that Endzone is not also focused on using cover and finding idea lines of sight and more on predicting future enemy positions. There’s some neat context-sensitive actions that add depth to the strategising; having a player run into a completely still opponent from the other team will stun the player, making that player unable to himself then move or stun other opposing players.

Despite being based on American football, Frozen Endzone does not completely adhere to its rules and traditions. For one, each arena features obstacles and those obstacles are randomly generated. The game also pseudo-randomly picks the starting positions of both the football and the players, with the team on offense always having one player start extremely close to the football. Scoring points in the game is also a bit different from scoring points in traditional gridiron. While moving the football from its starting position to the endzone grants the standard seven points, the team on offense can instead opt to score by enterting a midzone for three points, with the upside being that midzones are a lot easier to reach than the endzone. Additionally, players that hold the football and travel over bonus zones gain the team additional points when making a successful play. All this comes together to form a game that is inspired by – but not a slave to – its source material. 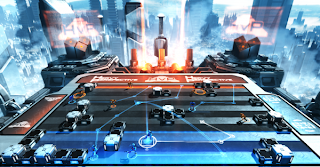 All these changes, from both the original Frozen Synapse and American football, ultimately make some sense. There are far less actions that an in-game player can take than in Frozen Synapse, but in the context of a sport game that makes sense. Randomly-generated arenas and midzones/ bonus zones, while not really sports-like, keep both the players on their toes and ensures the more tactically-minded will triumph.

However, the setting for Frozen Endgame just doesn’t gel as well with me. The base mechanics of Frozen Synapse matched with the slick aesthetic to create an overall experience where everything that happened within the game seemed appropriate. For Frozen Endzone, I didn’t get the impression that the tactics structure gelled as well with the sports theme. While I know that tactics plays a big part in sports, there’s no sense of weight or physicality in this beta version of the game, which is a critical part of the appeal of real-world sport. This is not to say that Frozen Endzone is a bad game in any way in its current state. I actually believe that the game could be released in its current state and everybody, whether critics, Frozen Synapse fans, and newcomers, would be quite happy. The thing is that when Frozen Synapse married all of its elements together in a very tight package, it is disappointing to see that the games spiritual successor does not do the weaving quite as well. 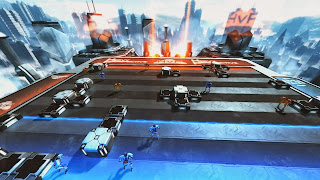 That’s all personal opinion though, and I guess I only have one serious complaint when it comes this build of Frozen Endzone; the camera. Instead of the game being entirely top-down like Frozen Synapse, Frozen Endzone instead adopts a slanted camera which changes the angle at which the arena is viewed when scrolling the middle mouse button. While I don’t particularly dislike this type of camera and it works fine as intended, I do not like that it is the only camera option. There are several instances where I would have greatly preferred a top-down view that is not as zoomed-in as much.

Overall, Frozen Endzone is coming along nicely and will be a good video game. The mechanics of the game are solid despite lacking the complexity Frozen Synapse and it is hard for me to see many people truly disliking the game. However, Frozen Endzone does not mesh all of its elements into one cohesive whole, and that inconsistent tone might disappoint people who loved the near-perfect Frozen Synapse. Also, that camera needs work.