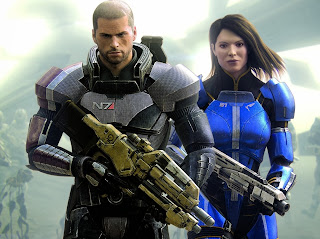 My concern is that in terms of narrative there is quite literally no way that any Mass Effect game that the developers can top the existing trilogy. Or to put it another way, when you’ve got a narrative that takes a simple mid-ranking military leader and concludes with her literally deciding the fate of the entire universe, there is no possible plot arc that can be better than that.

After all, what could be bigger than saving (or destroying) the entire flipping universe? While I’m sure some philosopher will be able to convincingly answer that, for the purposes of video game narrative, there’s simply no way that BioWare can do something more impressive than what it’s already done.

If BioWare creates a similarly epic plot and again concludes with a character saving a species, planet, galaxy or the universe, then fans are going to be disappointed because the expectation in the games industry is that sequels are bigger and better. This is an industry of escalation, and people are quick to criticise anything that doesn’t offer that escalation as being “stagnant”, or to use the more popular (if semantically inaccurate) “lazy.”

But what if BioWare were to do a smaller-scale narrative? Perhaps a more personal story of revenge, or a localised threat? The problem there is fans are going to be disappointed because the emotional impact of the narrative won’t be as great. The game will feel more limited and smaller in scope, and that doesn’t gel with the RPG genre or its fans.

In presenting what is arguably the most powerful narrative we’ve seen in the games industry for some time, BioWare has accidently dug itself into a hole whereby it can’t possibly create a game that has an equal or greater impact than what it’s already done. In light of the inevitable disappointment that this will create, I wonder whether BioWare should have simply left the franchise at the near-perfect example of a trilogy that it has already created.