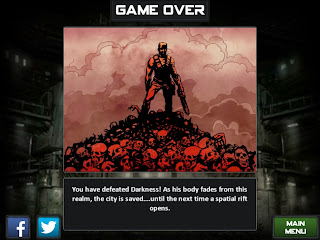 One of the best things about the tablet market today is ability for developers to take our childhoods and turn them into iOS apps. I’ve got fond memories of epic games of Monopoly, Trivial Pursuit and Risk, and now I can now relive it anywhere. Not being into the card based adventure games or adventure board games as a child, Chainsaw Warrior was a new experience for me and so I get to play this newest iOS recreation with eyes untinted by nostalgia. While I had more experience with traditional board games, these games also translate from the physical to the virtual very well, offering fans of the game a chance to relive the time that many were able to first experience games.

Chainsaw Warrior was a 1987 zombie board game that puts you in the shoes of an ex-special forces soldier with only his wits and his chainsaw up against a horde of zombies that has taken over New York. After everything else has failed, it’s this warrior’s duty to save the city in under an hour. Outside the bounds of the game, it actually sounds like a strong plot. I mean, I’d want to play that game, even though it sounds a bit Duke Nukem. Keeping true to the original game and holding on to the 80’s style and Games Workshop feeling, it’s a bit of a blast from the past. 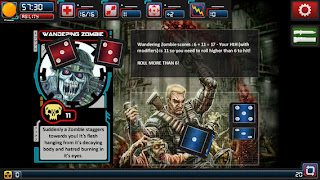 Having never stepped foot in a Games Workshop and being born two years after the original release of the game, I am probably not the target audience of this production, and that being said, I wouldn’t rush out to play this game. Growing up in the age of progressively improving graphics on video games and never really getting into the D&D or any of those games that rely on imagination to drive the gameplay rather than what the developer has predetermined, I found it tough to get into this game. Keeping so true to the original board game as this does splits your audience immediately, forcing an inbuilt audience of people that already love the game and people who are going to be a hard sell.

Keeping true to the original has also seemed to mean that they don’t aim to use the complete capabilities that the tablets offer; the game looks and feels very static to play. This doesn’t have to be the case, because some other board game adaptations are gorgeously animated and that’s disappointing with this title. 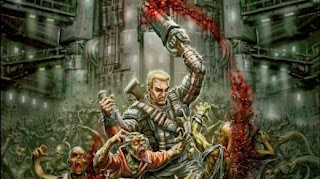 There’s also the key issue of old board games that has since been done away with – the reliance on dice and other random elements. Classic games such as Monopoly and, yes, Chainsaw Warrior, rely on the successful roll of dice for the player to see success. This in turn took away from player skill. Modern Eurogames, such as Catan, Agricola and Puerto Rico, have all but removed this random element, and so player success is entirely reliant on skill. Going back to play one of those classic games after playing the modern titles is quite hard now.

Games like this are hard to judge. They are incredibly divisive. Being in the camp of having not played it before, I found it to be fairly poor in terms of not offering an experience that feels especially modern. IT’s also a game that’s a little too heavily reliant on luck, and it’s for this reason that ultimately I would recommend folks check out some of the more modern board games out there that have been so carefully optimised for the iOS platform.