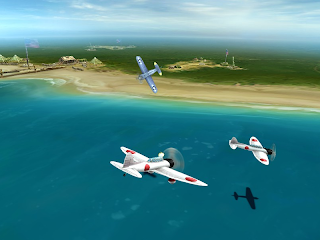 The only criticism I could possibly come up with with the original Ace Patrol game was that its free-to-play structure was a little expensive and didn’t really gel with the serious strategy game structure.

So the fact that Pacific Skies is content to charge a small premium (around $6) and then lay off from begging for money makes Pacific Skies the perfect iPad strategy game. Literally, there is no possible criticism I could see anyone with their head screwed on correctly leveling at this game. Pacific Skies is accessible tactical strategy with enough depth to keep the most hardcore of strategy players hooked for quite some time to come.

Aside from a different setting (as the name suggests this game focuses on perhaps the most important conflict outside of Europe during World War 2), Pacific Skies doesn’t do too much more than its predecessor. That means that you, the player, will take a small squadron of military planes to dogfight in turn-based tactical action against small squadrons of enemy planes. These planes have a remarkable number of maneuvers available to them; a beginner pilot might be able to gentle bank to the left or right and make a dive attack from altitude for increased damage, but these pilots get experience as they survive combats, and that experience gives them access to advanced moves from sharp U-turns to turn a dicey situation with an enemy on the tail into an easy takedown. 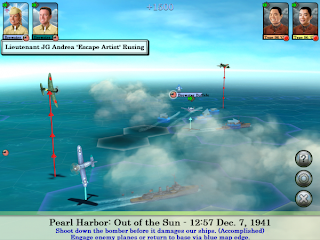 Each move takes up a turn, and if the enemy is in range at the end of it the player will automatically attack to do some damage. The skill in Ace Patrol is to bait enemy planes into traps, because units go down easily and there’s not many available in any given mission. In the single player game there’s just enough AI to provide a reasonable challenge, but the game really takes flight in multiplayer where outwitting a human opponent is so much more rewarding.

All of this is supported with a nice level of historical authenticity in terms of conflicts and unit statistics and some charming cel-shaded environments to play on. Being turn based as it is the game has this lovely hex boardgame aesthetic which has obviously been designed to appeal to genre veterans.

It’s also worth mentioning that there is a mass of content in here. There’s close to 200 missions in total (I won’t pretend that I’ve had the chance to play every single one of them), and while individual missions don’t take so long to play through, you’re still looking at dozens of hours here across the difficulty levels and some stiff challenges that require you to win skirmishes without taking damage, and that’s before you wade into the multiplayer.

What continues to be so impressive about the Ace Patrol series is that it takes a kind of conflict typically better tuned towards action games, the dogfight, and distills it down into a tactical turn based game that still feels like an authentic dogfighting game.

To take such an unnatural style of play as turn-based tactical play and make it feel real – if that isn’t the mark of a true genius developer, I don’t know what is.

Review: Lego: The Lord Of The Rings (iPad)