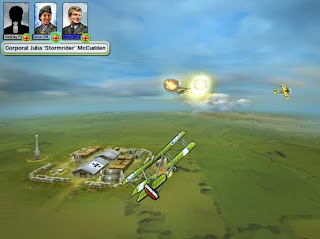 Sid Meier really does have a midas touch and when 2K Games calls him in, people should pay attention. Despite 2K’s shaky history on the iPad, Sid Meier’s involvement in Ace Patrol has provided one of the finest tactics games yet made on the platform and here is a game that is essential for any strategy fans with iPads.

Don’t be fooled by the fact that it’s free to download, though. That only gives players a tutorial though, which will give you a feel for the game and little more. You’re going to need to pony up for the bulk of the game, but that said I was surprised with how cheap it was to buy all the campaign stuff; I consider this some of the best value content I’ve seen on the iPad to date.

And on to the game. This is a tactics game, broadly speaking, where players move units around in a turn based fashion, looking to out manoeuvre and take down the enemy fighters. With most tactics games players can use terrain to provide strategic advantages; placing units on forested terrain to provide defensive bonuses for instance. Because Ace Patrol takes place in the sky that strategising is made rather simple, but Meier and his team have done a good job with giving players clouds to hide in (opening up ambush opportunities), and forcing players to account for the fact that in the sky you can’t just turn on a whim – planes have turning arcs that a player’s strategy needs to take into account. Then there’s the ability to use altitude as a weapon (diving planes have an advantage over low-terrain enemies) and the fact that each pilot can acquire additional skills and powers by being successful in combat, and you’ve got a tactics game that is, at a skirmish level, deeply engaging and offers surprising depth.

Thankfully there is also multiplayer and equally thankfully that mode works so well because the AI in the single player manages to be entertaining but unable to challenge tactics veterans. There’s some secondary challenges like high scores relating to taking as little damage as possible, and it is fun working out how to complete missions without taking any damage. Replayability is also very high because players can pick which missions they want to take on over the course of a campaign.

This is all supplemented by some wonderful production values. Battlefields look like some of the finest board games that you can imagine. Planes are cel shaded and look nothing less that pieces that players move around the aforementioned board. The interface is wonderfully elegant and very easy to follow, allowing players to get back on with the job of strategising.

I haven’t had as much fun with an exclusive game on my iPad as I have with Ace Patrol in a long, long time. It has been built with the tablet in mind, is free-to-play but contains fair in app purchases, and is endlessly replayable. With Frozen Synapse right around the corner and Leviathan: Warships just released this is a truly great time for tactics strategy fans on iOS.