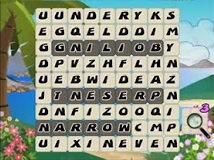 Word games and video games were two of my favourite pastimes growing up but the two largely remained segregated affairs. Back in the day, the simplicity of handhelds condemned crosswords and the like to the realm of pencil and paper. It’s somewhat disheartening, then, that Word Wizard 3D arrives years after Nintendo established workable pricing schemes, visuals, and controls yet isn’t able to outclass the standard dollar store activity book.

It’s especially saddening because by all accounts, Word Wizard should be the crème de la crème. The promise of eight activities, over 100,000 words, and a technological advantage over books in the form of randomisation all sound legitimately compelling. That last point in particular sounds most tempting; after all, randomised puzzles with a sufficient word count should lead to a virtually infinite supply of puzzles. Tack on a competitive price tag and it sounds like a winning formula for killing time on rainy afternoons like the days of old.

Regrettably, a good chunk of the modes are half-baked experiences that are simply not engaging the first romp through, let alone any subsequent trial. Even the finer, more innocent games suffer from their own crippling nuances. Had there been a concerted effort to polish just one or two of the games on offer, Word Wizard could have been a solid release in spite of inconsistent quality, but instead you are offered a variety of disappointment. Rather than run the gauntlet explaining eight games that should be conceptually familiar to most, I’ll comment on the shortcomings of two of the would-be “better” games. 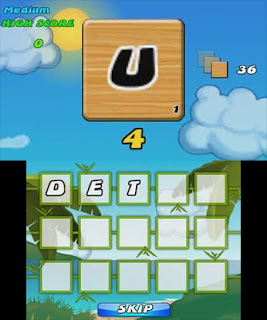 The classic Word Search is flawed almost irredeemably. It’s been reconfigured to operate as an endless time attack rather than divided up into predetermined puzzles, which would be an interesting approach if the game’s randomisation actually worked. As is, I wound up searching for the word “kettle” more than 10 times in a single session amongst countless other offenders. Furthermore, regardless of the difficulty level selected, diagonal words never showed up, causing the experience to rapidly grow stagnant. Since the game remains consistently repetitive and brain-dead in difficulty, it’s so difficult to lose that you’ll have to be actively self-destructive to even set a record.
Alphadoku is the opposite in that it actually benefits from randomisation, but it still manages to squander the opportunity courtesy of slippery controls and the lack of a basic function that most digital Sudoku variants have included for years – the ability to record possible letters for a particular space. The use of a questionable, slanted font also causes several letters to look alike, subsequently making visually skimming through rows a tedious task (not to mention you could easily sabotage half an hour of progress for making a mistake).
It is possible to forgive the mechanical flaws of games that carry a grand vision or offer an overall feeling of quality, but Word Wizard 3D’s dry nature means there’s not a whole lot to see here beyond the misgivings. The overall blandness is compounded by a lacklustre presentation and occasional sprinkling of stock animal characters. To be fair, the 3D effect, while entirely irrelevant to the gameplay, has an astounding amount of depth that makes it mildly entertaining to toy with the slider.
Word Wizard 3D is hardly the bottom of the barrel, but when most of its games are faulty to the point of losing sight of the original formula or are inferior to the average developer’s approach, it becomes unfeasible to recommend a purchase. Even though the game is admittedly inexpensive, it’s certainly worth digging through the eShop for alternatives.