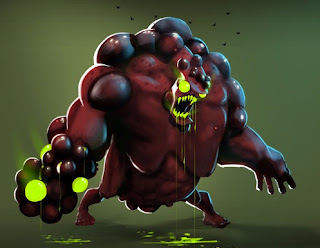 Imagine Left 4 Dead as a 3D side-scrolling game and give it a more comical polish and you get Final Exam, which follows the adventures of four characters as they return to their hometown for a high school reunion only to be welcomed by a horde of monsters. They must fight their way through various parts of town and find the source of the monster outbreak.

Unfortunately, the story could be a lot stronger as it only serves to move the player from one location to another. Despite a weak storyline, the gameplay is really fun, especially when players don’t go through it alone.

Combat is done in three different ways: melee, firearms, and explosives. Players can use all three in combination, but three of the four characters are prominent in one of the abilities, providing variety in combat, which is useful in cooperative gameplay. In order to progress through each level, players must complete a set of objectives. These objectives range from blowing up a wall to proceed further, activating a switch, or escorting an NPC through an enemy-infested area. 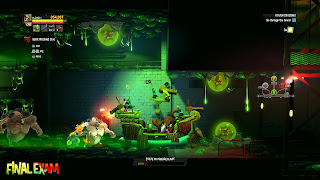 Some of these are located the far edges of the map, which only serves to show the scale of each level, but there are always pockets of monsters to slay on the way to each objective. In some cases, there might even be a large pack of foes, and players must kill them all before moving on. It provides an opportunity to increase the player’s overall score in the level, which can be compared to others through leaderboards. The variety of creatures allows room for players to use different tactics for each cluster of enemies. Combos can be initiated by chaining multiple attacks and kills, and players have the option to “bank” their current combo score if the enemies might be too much to handle. It’s a really cool way of maintaining a high score, but I didn’t use it too often because I was more focused on surviving than gunning for a high score.

Each level is huge with multiple paths that can lead to main objectives, hidden collectibles or even various weapons that add to the overall level score, and each weapon found adds to the players melee, firearm, or explosive arsenal, making combat even more fun. However, there are times when it’s too big, which leaves a lot of empty space for more annoying enemies to immediately overpower a single player, making combat way harder than it should be. 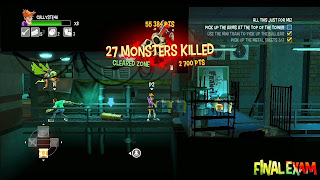 Each character also receives points at the end of each level which can be allocated to stats and abilities. For the most part, each character’s abilities are the same throughout with the exception of four special moves per character. It would have been interesting to see different skills for each character since most of them specialise in a certain fighting style.

Like other sidescrolling titles (whether action-based or otherwise) such as Castle Crashers, Scott Pilgrim vs. the World: The Game, and The Cave, Final Exam places high importance on cooperative play. You can only go so far with one character, but the real fun begins with a second controller or online. In addition to working together to completing each objective and watching each other’s back in a tough fight, all players are competing for the top score in the level. This can be achieved by defeating the most enemies, staying alive, or participating in completing the missions. It’s a great way to ensure cooperation, but also to slightly compete for bragging rights at the end of the level.

In the end, Final Exam gives players hours of gameplay that is fun and keeps each player on their toes. Each level comes with its own set of challenges in terms of objectives and enemies, and it’s always interesting to see how players react to various scenarios that pit them against a horde of monsters. With terrifying monsters and brutal combat, Final Exam can still grab you and your friends’ attention for hours on end.

Review: Lego: The Lord Of The Rings (iPad)