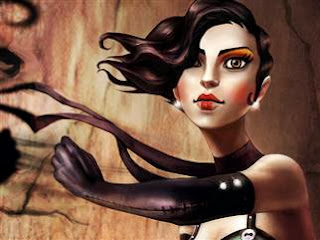 At a PlayStation 4 launch event today I kept being drawn back to the same game. I played it on a nice big TV, with the slick new PS4 controller in my hand. I walked away and played something else for a bit. But then I was back to play the demo again. Someone else wanted a go so I needed to walk away. Then I came back to play it again on the Vita through the PS4’s remote play feature.

It’s being released for PlayStation 3 and PC as well, but Contrast is the PS4 game I want the most.

It’s a beautifully artistic little title that reminded me of the creative inspiration that must have driven the brilliant Rain on the PlayStation 3. It’s a game that doesn’t focus so heavily on the “gameplay” as driving players through a unique and breathtaking experience. And just like Rain, it’s got a darkness and mystery about it that is at the same time compelling and mysterious.

In the demo players are set with a couple of basic tasks, and they all use the same basic puzzle mechanic; the lead character is able to transform into a shadow, and when she does that she’s able to use other shadows as 2D platforms. The game seems to be all about finding a way to light an area in a specific way that it provides the right platforms to get to a specific objective. 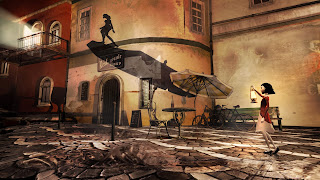 While it’s simple, it’s also incredibly compelling because it gives players a new way to think. Just as Rain was able to play with player’s expectations by literally taking their point of reference (the avatar) away from them by rendering him invisible when he wasn’t standing out in the rain, Contrast requires players to make a mental adjustment where what they would typically expect to be able to do, they can’t. For instance, a thin pole in the middle of an area means nothing in a 3D platformer, but the moment you shine a light on it, it becomes and insurmountable obstacle. I haven’t played a game that makes me think about things quite like Contrast has, and that’s refreshing.

Unfortunately due to the fact that the demo took place in a noisy room I couldn’t catch the snippits of narrative, but the visual aesthetic has that same “innocence lost” charm of a Burton film, and in watching the cut scenes playing out, I suspect there are some very adult themes running through it. People who take their games seriously (as creative endeavours and objects to study and understand, not in the sense of “I’m awesome because I can get 10000 headshots in ten minutes) will get a real kick out of this one, I’m certain.

I was left desperate to play more. I don’t know if there will be any differences between the PS3 and PS4 versions, but irrespective of the platform that I end up playing it on, this is by far the most excited I’ve been for a game in some time.

Expect a review as soon as we can get our hands on a copy.