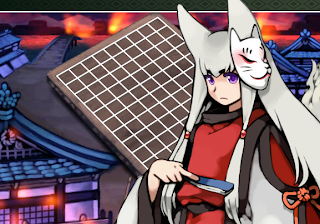 In Japanese folklore, a tsukumogami is a household object which has gained sentience, turning against humans to wreak havoc upon the unsuspecting. 99 Spirits is an RPG revolving around this phenomenon, chronicling the journey of a swordswoman named Hanabusa through medieval Japan to uncover the mystery behind these apparitions. Combining elements of puzzle, strategy and role playing, TORaIKI and Fruitbat Factory offer up a quirky and interesting game full of fresh ideas, but not without missed opportunities.

At first sight, 99 Spirits seems like a fairly straightforward JRPG adventure. The story kicks off with the protagonist losing her parents to an evil force, a suspicious character hinted at being behind it all and a forbidden sword being revealed as the only way to fight off evil. This game revels in genre tropes, although this is not entirely bad. Although the story seems familiar at times, the writing and localisation is top notch and the pacing is excellent. 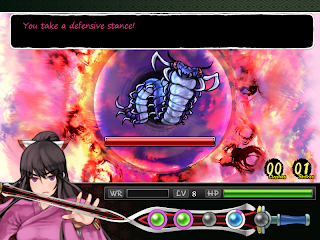 Hanabusa travels alongside her fox companion, Komiya, a flattering, womanising guardian who engages in some hilarious dialogue with the protagonist. The lighthearted quips between these two add flavour to the story and prevents the plot from dragging on. Furthermore, the merchant, craftsman and restaurant owner in the town are not the standard RPG cardboard cut-outs that they are in so many JRPGs before, but instead have consistent characterisation with their own motivations. The ever expanding cast of interesting characters allow the plot to advance naturally in both comedic and dramatic directions, allowing the story to feel fresh despite its predictability.

The gameplay, on the other hand, is completely devoid of the story’s charm. All movement is done on identical grids with enemies and points of interest scattered about. Your enemies will move as you do in a rogue-like fashion, and contact with one starts a battle. The grids do little to convey a sense of adventure, and it’s odd that a game with such charming characters and art could have such an uninteresting movement system. 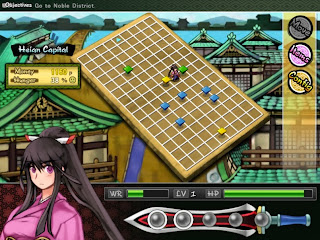 The combat is engaging at first, although it too becomes tiresome. Tsukumogami cannot be harmed unless they are first identified, instead existing as a shroud of purple smoke. As fate would have it Hanabusa’s magic sword is the only thing able to identify them. Successful strikes against the smoke will allow you to reveal hints to the spirit’s true form, including letters of its name or a word associated with its purpose. Meanwhile, successfully defending against the spirit’s attacks gives you the opportunity to guess its true form and make it vulnerable. This adds a word puzzle element to the traditional turn based RPG battle, somewhat like playing a game of 20 Questions with your opponent while you cut it to pieces. The concept of tsukumogami is a breath of fresh air to RPG fans tired of the generic fantasy or sci-fi creatures common in other games, although the enemy designs sometimes do lack a certain flair. Some are simply everyday objects with eyes in odd places which is honestly a huge missed opportunity to make a teapot or a pair of socks look menacing.

After upgrading your sword, identifying spirits becomes almost trivial as extracting hints from opponents is too easy. After revealing an opponent’s true identity, Hanabusa must defeat it in combat using a combination of the same attack and defend commands. Unfortunately, attacking is simple and all the opponent’s strikes can be blocked by successfully timing an easy quick-time event. You’ll find yourself skipping quite a few battles in the latter parts of the game since they won’t be offering any new challenge. Eventually you will unlock a system allowing you to capture tsukumogami and use their skills in battle, although it’s never necessary to do so and this feature tends to prove more tedious than engaging. 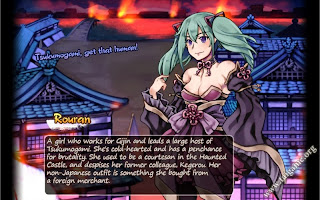 Captured tsukumogami can also be used to solve environmental puzzles or defeat enemies with certain gimmicks. These tend to be integrated very well into the story, so you’ll rarely feel that the game is padded even though the main quest is quite lengthy. It’s a real testament to the game’s writing when even simple fetch quests can make the player feel like they’re furthering the plot.

99 Spirits is certainly an odd game which shines in some places and yet is dull in others. Although the gameplay which initially seems interesting quickly becomes repetitive, the developers weave an intricate plot with likeable characters which will keep you playing to see what happens next. Thanks to clever writing and some thoughtful localisation, 99 Spirits comes highly recommended to fans of quirky Japanese games searching for a casual RPG without the needless frills of the genre. For those looking for a deep battle system requiring cunning and strategy however, this game might leave you wanting more.

Xbox One Australia head on partnerships over internal development: ‘We’re not about building empires’