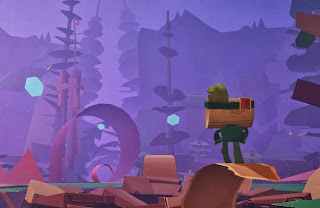 There aren’t many games that make me stop and look at every little individual aspect of a game. Tearaway does that. Brought to you by Media Molecule, the same team behind the LittleBigPlanet series, Tearaway brings the same creativity and pure joy that you would expect in a LBP game.

It’s a relentlessly cute setup from the game, and immediately hooked me into the preview build. I was the sun, with my face always shining down in the paper world below thanks to the Vita’s camera. I was in control of a messenger whose job it is to reach the sun to deliver a message. Yep, that’s right; there’s loads of fourth-wall breaking stuff in here.

What immediately attracted me to Tearaway was that it utilised every single feature of the Vita. I used the touchscreen to opening presents and squash enemies. The rear touch pad saw my fingers pop into the game, creating bounce pads and launching enemies into the air. On paper, most of the features sound very gimmicky and perhaps in the long term that’s exactly what they’ll become, but very early on I just didn’t care. I was having fun. 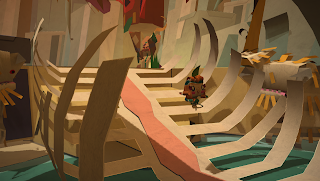 There is quite a lot of LittleBigPlanet in Tearaway in regards to the way the game feels to explore. It’s not a difficult game by any means and when you do die you get sent back just a few moments of play. The puzzle design is imaginative though, and fits very well into the whole premise of the game. Need a crown to give to a king? Cut it out of paper. Need snow to fall down? Make some snowflakes. Tearaway gives players the same innocently creative control over the world as they had in LBP, just without the level creator built in.

And that how Tearaway pulls you in and doesn’t let you go. It grabs the papercraft aesthetic and turns it into a complete package. Run through grass and it will fold over, water creates ripples out of creases. Bridges will curl out from underneath you. It’s an interactive paper environment that you want to explore every fold of. 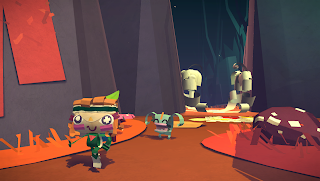 There’s still time to resolve some of the issues, but I did have a big one when it came to the camera control. In a world such as this that is filled with creativity, I was often forced to look in a certain direction. There is limited ability to change the direction of the camera and I ended up fighting with the controls. Sure it was possible to go into first person view, but doing so means the game loses some of its shine, as it becomes more of a window into a diorama rather than a vibrant paper world.

From the preview I got a sense of how big the game could be. Every chapter in the game has a certain number of collectables to track down, many which I was unable to complete in a single run though. The steady stream of ability unlocks meant that there is the option to return to chapters to retrieve items you may not have been able to.

Media Molecule have a really amazing game on their hands here. Tearaway should fill the void for any gamers who want a platformer that is highly customisable and relatively stress free. What I am certain of is that it will easily be one of the best games of 2013, and is a must-buy for any Vita owners.