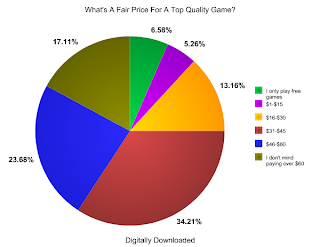 Being a compulsive Twitter user that I am, I don’t think there’s a single day (if not hour) that goes by that I don’t see the following line (or a derivative thereof) used: “game XXXX is too expensive,” or “games are too expensive.”

And, in fact, that attitude is backed up by a recent poll that we ran on Digitally Downloaded where a full 25 per cent of respondents believed that a reasonable price for a top-quality game was $30 or less. Anything more than that, therefore, is “too expensive,” and considering the costs involved in making a game and the profit margin that a developer or publisher actually sees from their work, charging $30 or less for a top quality game is simply unsustainable. What can we draw from that? The games industry is in trouble when it can’t convince a full quarter of its most dedicated consumers (the average reader of Digitally Downloaded is not a casual game player) of the value of its product.

I’m not going to say these people are wrong. “Expensive” is, after all, a term relative to the individual, rather than a universal truth. For instance I consider buying a bottom-of-the-line Kia car to be expensive because I’m not that interested in driving. However, someone who does love driving (and has the money) would consider a Ferrari to be a reasonable purchase.

Similarly, for someone who’s idea of playing games is Candy Crush on the morning commute to work, a $90 (for Australians, $60 for Americans) game is going to seem expensive. Those people aren’t the problem, as they are dollars that the industry should never have expected in the first place. The problem that the games industry faces is that the people that buy the consoles and play dedicated console games for a couple of hours or a lot of time each week should not consider games to be expensive.

And yet it happens over and over again. For instance, I recently had a couple of exchanges with folks on Nintendo’s MiiVerse about the Wii U port of Angry Birds: Star Wars. Now, Angry Birds: Star Wars is a very fine game with dozens of hours of content and it is being released at a budget price by Wii U game standards. However, rather than see the value of dozens of hours of play for a budget price by Wii U game standards, if you look at the dominant point of view on MiiVerse the game is “greedy” because there’s an iPhone version for $0.99.

Never mind that there’s a couple hundred million more iPhones out there so basic economies of scale mean that products can be more profitable when sold for cheaper prices on the platform, the dominant attitude is to simply look at the price and make a value judgement on that price, without giving necessary thought to the context in which this pricing structure exists.

Why is this attitude the dominant one? It’s a simple case of commoditisation, and to a great extent it’s the natural forces of capitalism at work. Commodisation describes the process where a product loses its perceived value to the point where customers aren’t really that engaged in the purchasing process any more. In other words, where you’ll think before buying a $100 game, you’re far less likely to think about downloading a free or $0.99 game, no more than you’ll think about buying a banana because you’re hungry. Suddenly the sheer numbers of people downloading free or $0.99 games encourages more publishers to compete at that price point, providing games that offer more and more content for very low prices. It becomes impossible for premium-priced games to escalate in terms of product and quality at the same pace as the free and $0.99 games are, and so those premium-priced games start to be forced out of the market via sheer competition.

For luxury goods (of which gaming qualifies) commoditisation is a bigger problem than it is for, well, commodities, but there’s examples of this market pressure at work all through the games industry. EA is producing very high quality games and ‘selling’ them at free prices on the iOS platform. The most popular competitive game (League of Legends) is free to play. The mid-tier publisher is disappearing even as self publishing (for low prices) is creating the occasional megahit indie game. For every indie success there are dozens of failures, but the media doesn’t really cover those, creating a mass illusion that the independent development is a low-risk commercial investment, when in reality when you’re charging $0.99 you’re going to need a whopper of a marketing budget to sell enough copies to even feed one person for year to allow them to create a second game. Those AAA-games that are surviving are getting bigger and bigger marketing budgets because often the success needs to be manufactured. Sony is pushing the idea of “free” on to players through its PlayStation Plus service.

In every industry where the dominant product has been content sold to consumers, the commoditisation of that industry has destroyed the business model. We in the media feel it too – where once content was sold to paying customers via magazines and newspapers, now consumers expect the content for free and will go to the greatest lengths to ensure that they are in no way supporting the publisher commercially. You should see the number of readers on this site that have Adblock turned on. Where once there was respect (and a wage) for someone’s ability to curate accurate and comprehensive reference information for an encyclopedia, now random people with often dubious levels of knowledge have made Wikipedia is a default research point of call.

In the media, as with the games industry, commoditisation has normalised the idea that content holds no value, and so any cost whatsoever has become “too expensive.” Freemium games are reviewed, and then given a thumbs up or thumbs down depending on whether it’s possible to play the game forever for free, or at some point the developer asks the player for some kind of payment in return. A $20 game on the iPad, even one of the quality of XCOM, is criticised for because that’s a much higher asking price than iPad consumers are used to. And then a game like Angry Birds, that offers content-starved Wii U owners dozens of hours of entertainment, is the cause of an uproar because the only concern that the Wii U audience have is that it’s not priced as cheaply as far more economically stable platforms.

The publishers created this downward spiral of commoditisation (though others will argue that they were left with no choice after Apple lead the $0.99 charge). So, again, it’s not the player’s fault that they’ve been guided into this mindset where value is attached solely to price and not value of content, but regardless of who is at fault, the reality is that everyone loses.

See, there’s a problem with pricing a 30-hour game at $0.99 or giving it away for free; the margins are not economically sustainable. Angry Birds gets to be a success, but how many other games are able to sell 100 million+ copies to turn that $0.99/ person into the necessary overheads to run a business? Not many, and Angry Birds is a victim of its own success; even when it needs to charge a premium price in order to turn a profit on a release (such as covering the costs of porting the game to a completely different architecture on the Wii U), then it suffers in pricing competition to itself.

Free-to-play games might rely on just four per cent of players to spend money on the game, but it’s a dangerous line those games tread; a large number of that four per cent are the unhealthy, addictive kind of player that would take out a loan to fuel their play habits. The media can have a field day with the fallout from those unfortunate cases, damaging the reputation of not only the game, but the developer as well.

And what does this mean for the big-budget games that the serious players profess to love? For a start those games also come under cost pressures (as we saw in our own little poll; 25 per cent of people don’t want to pay a premium price for a premium game), and those cost pressures prevent the games from earning the kinds of margins they need to for the publishers to have the kind of money they need to take risks with other big-budget games. There’s a reason we see so little innovation in the AAA-game development space; no one can afford to risk a $50 million game failing.

It’s going to be difficult, if not impossible for the industry as a whole to turn around the perception that the content it provides is worthless. But I do think it’s important for gamers to understand why more and more game developers will focus on mobile or cheap PC development over consoles, and more of their favourite major developers get shut down, and why there is less and less innovation in game types; it’s because the words “too expensive” is a cancer that is destroying the ability for talented developers to make good games.