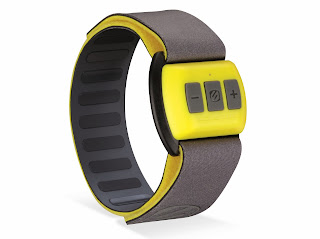 Ouch. Over the course of the last week I’ve cycled up hills, climbed stairs and lifted weights. I’ve run for miles and walked for several more. I’ve even been to the gym. Who would have guessed that gadget testing could be so painful?

The cause of this anguish is the Scosche RHYTHM, an app-based heart-rate monitor for iOS and Android. It’s a little different to your average fitness gadget: here, a moisture-resistant pulse sensor is worn on the forearm and the analysis work is done via a Bluetooth connection to your phone or iPod. It’s a setup that’s less constricting than a traditional chest-strap, and it allows a few simple controls to be housed in the sensor itself. These don’t go much further than a status LED, an on/off switch and controls for your music player, but it’s a comfortable arrangement that makes everything accessible when you need it.

The sensor uses light pulses to measure variations in blood flow, so it needs to be placed next to the skin and is best worn with a T-shirt or very loose sleeves. Scosche provide two sizes of neoprene armbands to keep it in place so, after charging for a couple of hours via the supplied USB docking station, it’s a matter of strapping it on, finding somewhere to stow your phone, and getting active. 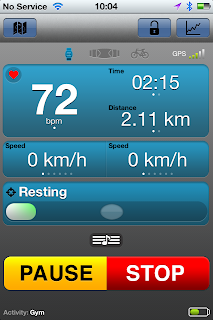 The unit is compatible with a handful of third-party fitness apps, but the majority of our testing was done using Scosche’s free RHYTHM software under iOS. It’s an ambitious program with more features than can be elegantly listed in one sentence: a homepage giving pulse data and current training zone, detailed graphical analysis, route mapping via GPS, simple user-defined profiles, an activity database, social media integration, compatibility with Runkeeper and MapMyFitness, audio prompts and, finally, in-app access to your music library. Phew, that’s some list. The interface isn’t as neat as those from Garmin or the other big-hitters, and the user documentation is sketchy, but the software is subscription-free and it works rather well.

There’s one more piece of good news: the RHYTHM is capable of some remarkably accurate heart-rate readings. It’s not intended to be as precise as a medical device, but it was within a whisker of my manual readings in over a dozen spot-checks. Even more impressively, it matched the data from some pricey Technogym equipment throughout the entire course of a long and sweaty bike ride.

Now for the not-so-good news. While the results of our iOS tests were mostly excellent, the device is prone to the occasional glitch – in one trial, for example, a short dog-walk registered as a 5km hike. The issue seems to be that the signal can take a while to stabilise at the start of a workout, leading to messed-up GPS and pulse readings. Additionally, Google Play users report a number of issues on the Android platform. A brief foray into the Android version confirmed that the software felt functional but unpolished so, unless you’re the patient sort, I’d recommend that you use an iThing if you can.

All of this leads to a fairly clear conclusion: and you’re packing an iOS device, and you can live with the odd rogue reading, the Scosche RHYTHM is worth a look. It’s not a device for data purists, but it certainly added fun and motivation to my workouts. It’s also available at a very reasonable price – currently US$80 direct from Scosche, and even cheaper at the usual online outlets. Sadly, though, it doesn’t make exercise hurt any less. Now, that WOULD be a gadget worth paying for.

Ashes Cricket 2013 canned. Excuse me while I go cry in a corner