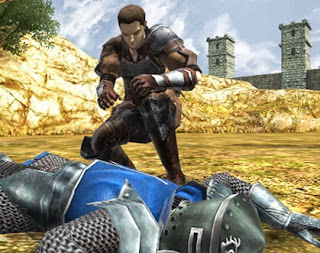 To say Valhalla Knights 3 expects the player’s full attention immediately would be quite the understatement. Before hitting the half-hour mark I witnessed a gratuitously detailed history of the world’s nations, a corrupt emperor turning on an already corrupt world, the legend of a master thief, an uninformative flashback of my character, men being hacked up, women getting berated, and the fall of the nation. If that last sentence sounded muddled, you’re in for a treat. Constant perspective swapping and informational tidbits thrown into the midst made for me a rather muddled introduction to the series.

Perhaps the most startling event was when one of my alleged “allies” engaged in non-consensual intercourse with a thousand year old elf he just met. My party members brushed off this occurrence and went straight back to business. That would be fine as a method of establishing a character as vermin, but a scene minutes earlier depicts him as sympathetic and concerned about the livelihood of relatives.
It eventually dawned on me that the initially chaotic narrative of Valhalla Knights 3 has some direction to it. Despite the game’s central hub being a jail, citizens have an unprecedented amount of freedom…assuming they don’t get hacked to bits when one of the local Families deems them a nuisance. This paves the way for several intriguing scenarios but also contributes to a dour atmosphere with thoroughly unlikable characters from every sphere. My custom-made protagonist was among the most pleasant of the bunch simply because he kept his mouth shut. 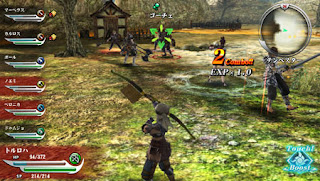 The gameplay itself takes the theme of orderly disarray to heart. Valhalla Knights 3 is structurally similar to many MMORPGs, boasting a focus on completing quests. What sets it apart is the combat, which quickly evolves from being a two-man affair to many seven on seven brawls. While the small-scale skirmishes are easy enough to slash through with a basic sense rhythm, everything becomes progressively more convoluted. You can switch between playable characters on the fly, but you’re probably not going to aid your comrades much given how quickly a battle can spread out.
One of the game’s major strengths is not even the combat system itself but the fluidity of transitioning into it from exploration. The second you swing your weapon at an enemy, the field around you becomes an enclosed, fiery arena and the remaining members of your group roll onto the scene. The change is seamless and retains the game’s flow far better than similar titles that slap unnecessary text and animations atop. It makes for an action game feel without compromising the depth of a spreadsheet-like experience. 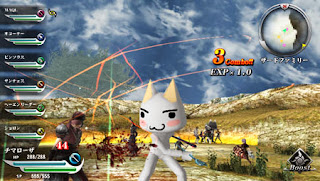 And believe me, there’s more than a bit of number crunching and micromanagement here. I suspect this one will be fairly niche as a result, but fans of such titles will become progressively more thrilled as the intricacies are revealed. Between seven playable species, highly customizable character stats, abilities, and classes (complete with even more complex subclasses), there are many aspects to keep under close scrutiny. You’re going to want to experiment with all these options as well, since the difficulty escalates at regular intervals. Regrettably, you’ll find yourself repeating several bland fetch quests to do so.
To make said quests worse, the game does not prioritize speed, which makes grinding for items and experience less than gratifying. For instance, whenever you slay a group of foes, you need to individually examine every body for spoils. Since battles gradually become hectic affairs with fighters splaying out in all directions, it becomes a needlessly repetitive task to raid all of their supplies once the fighting is through. Additionally, benefits from gaining levels need to be applied by going through the menus and deciding what category needs boosting. It becomes less of a headache the more you play and one could argue it does not intrude on gameplay, but I would have been perfectly content with a menu popping up.

The game also suffers from some of the slowest load times I’ve encountered on the Vita sans Wipeout 2048. This is not something I would normally address, but I believe it bears mentioning since navigating the central hub can be nightmarish. Five seconds spent trying to exit a small house can become forty due to the way areas are loaded. The more expansive environments are loaded at once, but the process of shopping and finding quests, which should be the game’s downtime, becomes exhausting. Depending on how much you value visual grandeur though, these rough patches may be justifiable; Valhalla Knights 3 definitely looks the part.
Valhalla Knights 3 is thoroughly ambitious and has plenty of depth, but a tad too much of it is masked by tedium. The lack of an engaging story does the game no favours either. Still, the combat system is one of the best I’ve used this year and may be compelling enough alone for some to consider taking up arms.