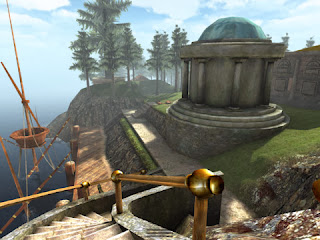 Myst is legitimately a great game. It’s popular to deride now as the point and click genre has evolved in some fascinating directions (such as everything that Telltale Games have produced), but for when it was released Myst presented players with a rich mystery, interesting and exotic environments and some taxing puzzles.

Myst on the 3DS isn’t even close to a decent port. It’s poorly optimised and often barely playable. While it is possible to eventually complete the game, it’s a constant battle against it to get there.

For example, in one room early on in the game there is a bookshelf with a few tomes on it. These provide critical background into the game’s narrative and setting, as well as providing a few critical hints on the more major puzzles in the game. 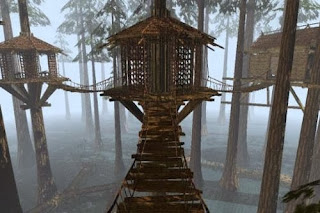 But on Myst 3DS the text is barely readable when zoomed in; the test is blurred to the point of barely being legible. It’s uncomfortable and slow going on the eyes. Other books have video footage in them (eBooks in their earliest form), but the video frame on the 3DS is so tiny that it’s ridiculous. Essentially there has been no attempt, at all, to optimise the game from the PC to the smaller view window of the 3DS.

Environments, meanwhile, suffer from some terrible compression issues. The original Myst had rather lovely environments that had a photographic quality to them. But the compression with this version leaves grainy, unattractive environments that lose a lot of the ambiance and atmosphere that was so critical to the game’s appeal.

The puzzles are hampered too by the shocking controls. You’d think a point and click game would be easy for a console with a touch screen, but no, Myst on the 3DS uses the touch screen for a menu system, and the top screen for the pointing and clicking. The problem is that the moment you ease up on the 3DS control pad, the pointer finger snaps back to the middle of the screen. It is nearly impossible to target small buttons and objects properly, which quickly becomes frustrating. 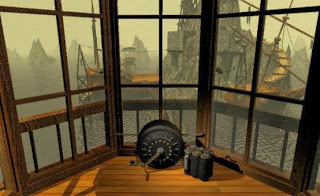 With all that said, if you can somehow look past the shocking controls, this is still Myst. The vision is still stunning, with alien and slightly dark environments offering a compelling mystery to work through. Most of the puzzles are brain twisters that some with the “a-ha!” moment as you make each extra step of progress. Satisfyingly, it’s up to players to figure out how to progress through the game. None of the excessive handholding that has invaded the genre in recent years is present here.

It’s almost tragic how underdone this port is. As old as Myst is, I still enjoy the kind of game it offers, and to have a version on the 3DS for on the go play would have been great. Sadly, it is very, very difficult to recommend this, even to the remaining fans of Myst out there.