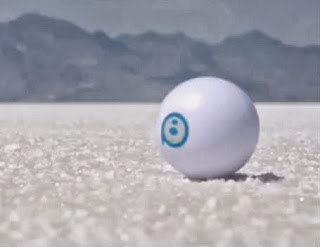 Sphero 2.0 doesn’t come cheaply. In fact, this might be the most expensive ball that I’ve ever played with with a retail of $180 or thereabouts in Australia. It’s a good ball though. I have had a ball playing with it (l promise I’ll keep the ‘ball’ puns to a minimum in this review now).

In very simple terms Sphero 2.0 is a robot ball that you control with your iPhone or iPad via apps that you grab off the Apple or Android app store. Most of these are free, but this is an open platform for develops and some of the apps will cost something. The most basic app is a driving app, where players use the touch screen or device’s accelerometer to move the ball around. Owners are encouraged to create mazes, ramps and jumps for the ball, which is waterproof and quite robust against drops.

The point here is that across the two dozen or so Sphero apps there is a wide range of experiences on offer, and on top of that it’s possible for individuals to program the Sphero for other unique purposes. As a development tool it’s a real canvas; it can light up in thousands of different ways and as a ball it moves around quite freely. It’s even waterproof.

Because seeing is believing I figured the best way to show off what this thing can do is via YouTube videos:

(Because the Sphero is programmable, it’s possible to create choreographed shows)
(Sphero Sport)
(Because cats are cool, and this toy drives animals in general crazy)
In other words, there are all kinds of possible applications for this toy if you’re creatively minded. If you’re looking for a straight-out game or toy it’s worth noting that the apps that are currently available for Sphero are fairly limited, so it’s more of a novelty than anything else. This device’s best value comes for people who are willing to use it as a canvas to make something, or even as a training toy for learning programming and the like. 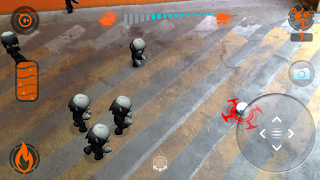 In terms of play itself, the first thing you’ll notice about the Sphero is that it’s quite heavy. There’s a lot inside the plastic shell to make this toy work, and that weight leads to some frustrating quirks at first; though Sphero is ball-shaped, the heaviness rotates with the ball, creating a heaviness to manoevering that makes it nearly impossible to drive straight at first. With practice it becomes like second nature, but I worry about any younger child that picks this up and winds up giving up on first impressions.

It connects in with iPhones and iPads via Bluetooth, which provides a stable connection that gives the device a range of 50 or so metres. This is plenty enough for almost any application you can think of. What’s less impressive is the battery life. It’s only a hour or so at full use, and while that’s understandable given the bluetooth technology, the lighting and the working parts in the device, it means that you’ll only get to play with it for a short period each day. As it is a robot, it makes a little bit of noise as it rolls about, but it’s hardly loud. The build quality of the plastic casing itself feels a little cheap given the devices’ absolutely premium price, but a couple of seconds use is enough to be confident that it’s not going to break easily.

Once you’ve got the hang of the ball it’s amazing just how good the technology is in this device, and how enjoyable it is to move around. The Sphero 2.0 has a maximum travel speed of twice that of the original model (around 2 m/s… which is very zippy indeed). That’s fast enough to make jumps and ramps a real potential. Personally though, I’m going to go build myself a Labyrinth-like maze to drive around.

And again, that’s the real strength of the Sphero 2.0. It’s a toy, but it’s also a creative canvas where the entertainment value of it is limited only by the imagination. The best toys – Lego and co. – are all like that. There’s been plenty of physical peripherals created that link into smartphones and tablets, but Sphero is by far the best I’ve come across so far.

Want to play the worst FPS ever made? Daikatana hits Steam