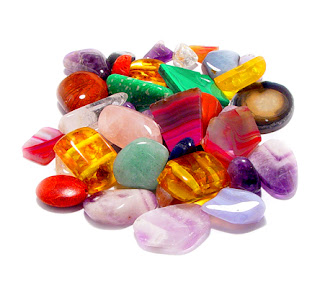 The match three/ jewel game mechanic has been around for a very long time. I have always found those types of puzzle games to be enjoyable. I tend to be pretty good at them and can appreciate how approachable they are for casual gamers. Sometimes games such as Bejeweled or Tetris are the only games I can get my wife or father to play with me.

That being said, I have found myself personally appreciating variations of this formula – especially when they have RPG elements to them (games like Puzzle Quest, Gyromancer and Puzzle & Dragons all come to mind). The story in Jewel Adventures does not do anything particularly special, but it does put some new twists on the traditional formula that I rather enjoyed.

You control a mage who sits on the right side of the screen, as enemies march toward her from the left side. As you complete combinations, you sometimes cast spells that can destroy said enemy, buying you time to complete your objective – until a new enemy comes out. 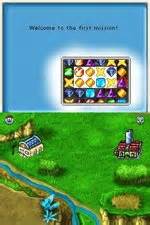 The objectives do change up slightly from time to time, but all revolve around the match three mechanic. Most of the time, you are trying to complete certain patterns. For example, you may have a large white square in the centre of the board, and you need to match up gems on top of it to clear out the spaces that comprise it. You can certainly match gems in other locations – that may give you attacks to use on your enemies or drop gems down into the required spaces so you can complete the patterns, but they are not the goal. In other instances, you might be asked to purge a specific number of a type of gem before the enemies kill your mage.

Along the way you earn coins, which you can use to buy structures for a very simple sort of town you are responsible for. They give you certain perks, like maybe a new spell that lets you spend some magic points turning a target gem into say, a fire gem, allowing you to complete a potentially pesky pattern you could not before. 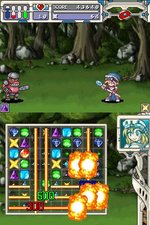 The game itself looks nice enough. There is not a ton going on – but the displays are both bright and colourful, with a good deal of detail to be found. Probably the biggest complaint is also a strength of the game, and that is the control scheme. On the one hand, it comes in handy to use the stylus to pick a spell and then poke a gem to change it over. That being said, the lower screen is somewhat small and the play area can feel a bit cramped. There were times I was clicking and dragging the wrong gem. Most of the time it was not a big deal, but every now and then it did create a legal, if unintended move and that could frustrate me.

There are enough modes and new twists on the traditional match three gameplay that Jewel Adventures will probably appeal to puzzler fans. It is not my favourite game in the genre, but I enjoyed it all the same.

Metal Gear Solid; focusing in on the boobs, yay or nay?