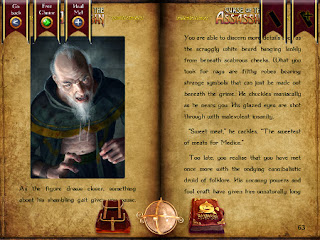 Interactive choose-your-own-adventure books managed to capture the attention of many youngsters and adults alike back in the 80s. The advent of videogames more or less killed the artform, but with the iPad and its app-friendly design, gamebooks are back.

As interactive novels, gamebooks allow the reader to play the role of major character in a storyline, a bit like a single-player pen-and-paper RPG. Every 2-5 pages a decision is thrust upon them. From minor decisions about which path to take, or where to sleep that night, to major decisions such which of your friends of family to save first from a bloodthirsty sect intent on your suffering, the reader has a very real influence over the fate of the storyline. What’s fascinating about these is that its entirely possible to get very bad endings, and part of the fun of these books is figuring out how to get to the ‘right’ ending.

(Read our interview with the game developer here)

Take the right path and much in the way of treasure and success will follow. Take the wrong path, and your character may suffer falls, road blocks, or even perish. In the right storytelling hands the plot can be gripping,with progress and achievements granting considerable attachment towards your hero. 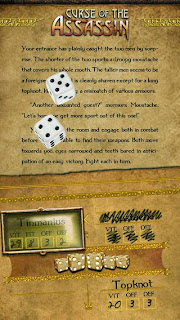 The team at Tin Man Games must be given credit for being that right storytelling hands. An Australian developer who have carved out a considerable niche market, they have managed to create the ideal gamebook environment, a mix of intelligent and engaging plot mixed with action and adventure.

So now the context. In Curse of the Assassins, the reader assumes the role of an adventurer of considerable acclaim who is engaged to the local governor’s daughter, and is a stand-out hero who discovers the untimely death of his former adventuring partner and childhood friend. The investigation, and avenging, of this most sorrowful sight is left to the player.

The storyline is gripping. Whilst the second person viewpoint that marks the genre is not every reader’s cup of tea, it is performed to an exceptional level, and really engages the reader. Characters are well developed, their individual personalities easy to connect with. Decisions lead to tangents, but returning to the major plotlines is seamless. The only issue I can describe is that the main plotline can be completed, even in the most difficult setting, within three hours. Replayability is high. Whilst the story will always commence from the same location, the decision trees lead to vastly different stories, each with its own series of challenges and rewards.

Beyond plot, the success of this genre is the interactive component. Keeping true to original gamebook styles, this takes the place through story dictated battles – from common thugs to mythological creatures, interacting with the environment (when prompted) were hazardous. Foolhardy decisions to walk treacherous paths may require you to make a single dice roll to avoid the massive damage from falling. All challenges take the place of dice rolls, the more difficult the challenge, the harder the score to beat. All rolls were prompted nicely, progression in the game dependent on the outcome. Like all games of chance, the fear of a negative dice roll when down to limited remaining health was always a scary moment! And it’s at times frustrating to know that skill isn’t as critical as luck, but all in all it’s an intuitive gaming engine that feels authentic. 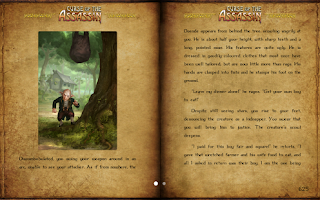 Achieving in-game goals was simple – the interface was clean, uncluttered and very easy to navigate. Inventory items were added automatically (with little customisation) and seamlessly, with item related status changes reflecting the challenging in acquiring nicely. Whilst more interaction may be required to sate the appetites of hardcore gamers, the ability to be swept along in the storyline was remarkable.

As one would expect from a team that has produced this many gamebooks, the game is very professional in its approach. Artwork was gorgeously designed, bringing a sense of class to the virtual book Music does contribute to the mood, but it was on the monotonous side. Whilst perhaps a greater, ranged score may have combined well with tense and more relaxing turns of events, it is far from distracting. Sound effects, in particular dice roles, were extremely well execution and added realism to the gaming experience

All put together, Curse of the Assassin is a fun experience. It works as a stand-alone story, but this is actually a sequel, although upon completion you may be compelled to try its predecessor, and all others of its like.

Vote for your favourite games of the year! Win free games!

A peek at Toon Link in Super Smash Bros.