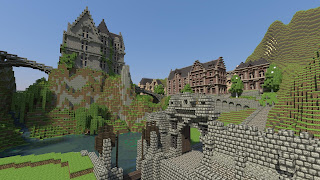 All these years later, there’s still a lot of chatter about Minecraft around the Internet, and indeed it still sells like hotcakes; it’s sitting right at the top of the retail sales charts in some regions and on many iOS app stores it has settled comfortably into a permanent top-5 spot.

One of the more interesting discussions that I would like to highlight is something I think is of critical importance to the development of the games industry and the way we “read” games; it seems that there’s a lot of people out there that believe Minecraft lacks narrative.

I’m not sure I agree with this because in many ways this line of thinking represents a misunderstanding on what narrative is and can be. With linear forms of entertainment (or art, if you prefer), a narrative’s the progression that you follow from the start to the finish; the story, in other words. It easy to recognise the narrative in these forms of media because without it there wouldn’t be much left.
Because this thinking of narrative is so entrenched in film, in literature, in theatre and in other forms of art or entertainment, in the games industry we tend to try to copy across our assumptions of narrative as well. If a game doesn’t have a singular plot with cut scenes and a linear progression from its start to its finish, we tend to think of it as a game without narrative. That’s not to say that we think it’s a bad game – see Tetris as the ultimate example of narrative-free gaming – but there’s the definite sense that there is the perception that a game that lacks dialogue and non-interactive cut scenes must not have a strong narrative, or a narrative at all.
What this assumption fails to understand is that there are narratives built into any form of play – it’s just that these narratives are not necessarily consciously recognised. When two children go outside and play Cops & Robbers, they are creating a narrative. Neither of them think that they are, but it’s there, and to an observer, its not unlike watching performance art like theatre. Similarly, when you watch a sporting match, you’re watching a narrative. The outcome will change from game to game and the reason that people keep coming back to watch more matches is because the outcome is unknown, but outcome aside, you’re watching a very definite progression from start, to middle, to end.
And then there’s the internal sense of narrative. Think of Lego, quite arguably the greatest toy ever invented. The process of building a Lego object is by very definition a narrative. There is a beginning (an unbuilt Lego object), a complication (it needs to be built and it won’t build itself), a dramatic escalation (the object is getting built, but WHERE DOES THIS PIECE GO?), and then a resolution (the completed object). That’s narrative, and that’s the reason that people that collect Lego and build amazing Lego landscapes develop an emotional attachment to Lego – it’s that hands on, internalised narrative that creates an intense sense of achievement and an emotional response as a consequence.
Minecraft is not dissimilar to Lego, and I don’t think anyone was surprised by just how naturally Lego and Minecraft partnered up. It contains much the same kinds of narratives – with in-game threats such as monsters to heighten the drama even further. People built incredible, intricate castles and more in Minecraft only to watch sadly as great big chunks and blown out by enemy attacks. People meet up on servers to work together to craft even more incredible structures. It’s a pure form of roleplaying because there’s no real limits – you just go out and do whatever you feel like doing.

I do think the games industry as a whole has a long way to go to realise the true potential for narrative in game form. Games have a unique capability to provide stories and narrative that are not constrained by linear progression, as constrains film, literature and other forms of art and entertainment. This in turn means that games have a unique capability to give us new ways to experience narrative, and through that, new experiences.

Minecraft would not be possible as a film, it’s a narrative that is unique to the games industry. I would love to see more games like it, and fewer that channel Michael Bay.