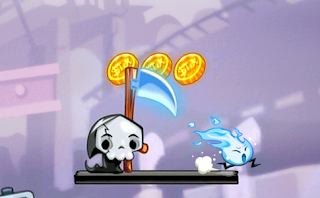 When you jump into one of Game Atelier’s games, you rest assured that you’ll find a gaming experience that’s delightful to the senses, with signature colourful visuals and upbeat tunes.

In its latest release, Tiny Death, the team have created an awesome leading character; a squashed down (and entirely too cute) version of the Grim Reaper. This beautiful 2D platforming title oozes the team’s unique style, and yet the adoption of a Free-to-Play purchase model puts a few unwanted skeletons in its closet along the way.

(Read our interview with the folks from The Game Atelier here)

In Tiny Death, you’ll slash your way through 80 challenging levels in four unique environments, gathering souls in the hopes of becoming the elusive grown-up version of the Grim Reaper. Making things more accessible for the touchscreen, you only need control the character’s movement and jumping ability, with scythe swipes handled automatically once coming into close enough approximation to the souls that you must reap.

Levels play out a bit differently than the typical platformer. Instead of simply hopping through a level, here you need to chase down all of the lost souls to open up the gate at the end of the level. There’s a strict time limit in place and the short levels are designed in such a way that you’ll likely need to run them through a few times to learn the fastest path to the end. Each level has three stars up for grabs: one for completion, one for collecting everything and one for completing the level below a even stricter time limit. 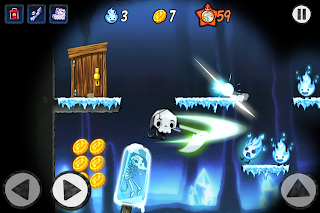 Boosts allow you to equip a variety of items that make getting those three stars in each level a great deal easier. Using them is never a necessity if you have formidable platforming skills, but the more casual players will very likely be needing to take advantage of them. Of course, with the Free-to-Play model that’s in place, using these boosts cost coins and the better the boost, the more it costs to use. The more expensive boost, like the invisibility and speed boosts cost 100 coins for a single use. When a level only has about 20 or so coins in them, you’ll deplete your reserves very quickly using these powerful boosts. Mostly, unless you’re willing to splash out a lot of money on this game the best bet is to go with the lantern, which illuminates the level;s dark areas and only cost 30 coins per use.

Upon arriving at the icy second world, the game, well, rubbed me the wrong way. The reaper’s movements are momentum based, meaning that you have to gain a few steps of momentum to clear most jumps. This isn’t a problem until you put him on ice and he slides a significant distance when trying to stop or change directions. After completing the first slippery level, I joked to myself that the next boost would be spiked shoes to alleviate the sliding; I must be psychic because the next upgrade was indeed spiked boots to alleviate the sliding. Granted, they aren’t a necessity, but when some of these icy levels also have dark caverns that limit your vision, you’ll start eyeing the additional item slots, which are each unlocked with separate $0.99 IAPs. Using two boost slots will reap all of your coins very quickly, which leads you to the coin doubler IAP for $1.99 USD.

I take no issue with spending money on digital video games. In fact, I recently spent $3.99 for an iOS RPG and as a regular Puzzle and Dragons player, I also invest money into it when I know that my money spent there will find a worthy return. In Tiny Death, the F2P model that’s used feels like ‘pay to win’. It clearly isn’t – you can get by with the coins acquired and single item slot, but it continually feels that it is. The more that I played it, the more that I wished I could have just spent a few dollars upfront and enjoyed the game without all of the excess.

Game Atelier’s Tiny Death is just as charming and beautiful as its previous titles Flying Hamster and SunFlowers. The solid 2D platforming gameplay is challenging and fun, but its adoption of a F2P model slashes a healthy chunk out of the game’s lasting fun factor. Even with its flaws, the game’s unique style and fantastic lead character should still put it on your download list.

Disney Infinity Toy Box on iOS; everyone (including Nintendo) should pay attention to this