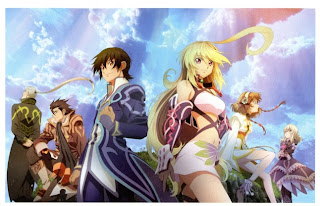 The Tales series has a long history; 14 main games and a handful of side quests. Through that time there has been a remarkably consistent approach to game design and though there’s been general improvements and tweaks to the spreadsheets operating the game, for the player, there’s a familiarity about the Tales games that is greater than what you’ll find in most other JRPGs.

That’s what the fans of this series seem to want, but that aside, Xillia proves one thing quite conclusively – the Tales series needs a rethink. It’s just not advancing as quickly as its immediate rivals.

The basic combat system remains roughly the same as it’s been in most of its preceding games. It’s action-heavy and involves stringing together melee attacks and “artes” (magic attacks) to form combos, without going all out with the button-mashing in order to preserve action points – run out of those and you won’t be able to attack momentarily. Because this combat system is intensive, players control just one of the party while the AI keeps the others in the team doing their thing according to a set of basic strategies that they are given.
It all works and once the team is levelled up a bit each combat is a satisfying explosion of activity for the 15 or so seconds that they last. Lights flash, buttons are mashed and enemies disappear. Then loot is dished out and it’s on to the next encounter. Tales of Xillia is even more action packed than the other games in this action-packed series. Maps are small but positively loaded with enemies to fight, and those maps will need to be cleared out to ensure that the party levels at a rate that means the boss battles are not too painful. Because battles are over so quickly they don’t become a trial on the patience, but because they’re action based they’re also not very strategic. In fact, even in the boss battles aside from figuring out when is the best time to hit the “block” button there’s not much active thinking that goes into playing Xillia; you just don’t have time for it. 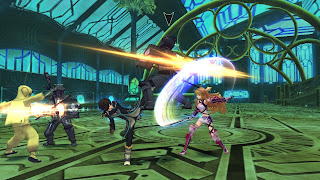 And that’s possibly why this series has never really struck a chord with me. I like my RPGs to have strategic battling, and those games that don’t really allow for that, such as the Tales games, fail to engage with me. I feel pretty passive as I play through these games, and Xillia’s not a whole lot different in this regard – in fact as an experiment I blocked my way through an entire boss battle. It’s great that the AI is effective, but when it’s at the expense of player agency, it’s crippling for any sense of attachment that we’re meant to have for this game or its character and world.
Levelling up is also largely free of player decision. There’s a skill tree in Xillia, but once players have selected their pre-defined roles for each of the characters (and they’re broken down into traditional JRPG tropes – healer, tank, glass cannon), then there’s very little incentive to branch beyond that skill tree and create unique skill combinations. The previous Tales game, Graces, did what I felt was a really good job of encouraging players to experiment through the “titles” system. These in-game achievements would unlock mini-skill trees that you could assign to characters and their development would be unique depending on which titles you assigned to them. Because there were so many different titles it forced players to make some tough decisions about character development, and Graces really encouraged me to own my decisions and be prepared for some pain if I didn’t come up with a complementary set of skills. 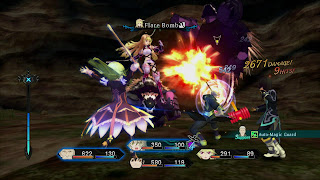 I was excited to see that Xillia also had a titles system, but then disappointed to discover that its impact on the game is far closer to a simple achievements system. What replaces the titles system is to me a step backwards and it seems the developers have decided to do away with their fleeting attempt to introduce depth into the combat system in order to instead ramp up the action. But at least Xillia does have a far faster and more fluid action system than the previous Tales games. I know that’s going to find a lot of fans amongst the fans of the series.
I’ve spent so long in this review focusing on the combat and system mechanics of Xillia because that really is where this game’s energy lies. The narrative and presentation that is wrapped around this combat system is quite pedestrian, though on par for the series overall.
The game’s characters are a fairly standard set of heroes and heroines that never quite manage to break out from their JRPG sets of cliches. The leading lady, Maxwell, is meant to be near-Godlike in power, but naturally loses all that power within the first five minutes of gameplay and is left relying on a rag-tag bunch of misfits to set about restoring her power and preventing the great big evil from ravaging the world.

And so they jump from town to town, indulging in a couple of side quests to help citizens with their individual concerns while tracking towards the next major conflict on their road to the final boss. A couple of hours in the game introduces a sinister mystery and this, naturally, is intended to keep driving players forward to figure out what is really going on.

But unfortunately, the narrative suffers from a few critical defects that prevents it being all that compelling. The biggest problem is also the simplest – the voice acting is quite poor and the performances are quite weak. It’s all very mechanical and it feels like each individual line was recorded separately and then cut into the game afterwards. Conversations are filled with awkward pauses between one character speaking and the other responding, and the actual quality of the recording seems to differ from time to time – almost like different recording settings were used for different voice actors.
It’s also disappointing that there’s no option to listen to the dialogue in the game’s native Japanese. The industry for voice-over work in games is far more mature in Japan and as a consequence the voice actors found in games tend to turn in better performances, even when they’re not the A-listers. There’s also the simple reality that a Japanese plot written by Japanese storytellers is better experienced in Japanese. Having been to a Shakespeare performance in Japanese, and having seen both the dub work and original voice acting in most of the Studio Ghibli films, I’m very confident in making the statement that something important is always lost in translation when a story is performed in something other than its native language. 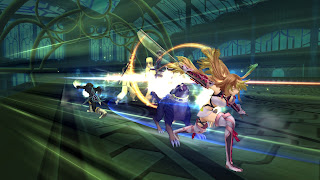 It’s also worth noting that without giving away spoilers the ending for Xillia is very disappointing indeed. The Tales series doesn’t often do sequels, and now I know why; the writers clearly struggled to finish this one in a satisfactory way while setting up for Tales of Xillia 2.
Visually Xillia is very basic, too. Characters and environments are clean and colourful enough, but they all look like plastic dolls and dioramas. Corners have also been cut with the animation, which is especially evident in the cut scenes, where a limited range in movements and facial expressions makes everything look more like a puppet show than anything organic. Whilst there’s a certain aesthetic appeal to this kind of art direction, Namco Bandai needs to be careful – there’s a new generation of JRPGs coming through that were once B-grade, but these games (leading the charge is Atelier Ayesha) has a far more generous eye to the expectations of modern game design. The Tales series is a little in danger of losing its status as a top-flight JRPG series status to these challengers.
With all of that said, Xillia remains a fun game, just not one that has quite the same level of impact as some of the other JRPGs that we’ve seen this year. The series has its fans and there is certainly less of the design flaws that hurt a game like Time and Eternity, but Xillia plays it far too safe, and I would really like for this series to take a risk or two at some stage and redefine itself before it stagnates.

Atelier Rorona is getting a remake for PS3 and Vita? Ohboyohboyohboy