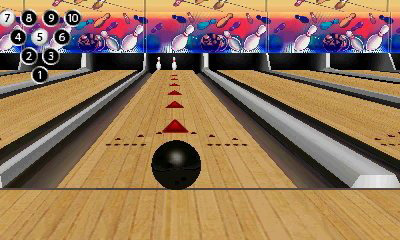 I had a chance recently to review a fishing title from Big John Games recently, and with both titles being of the sports variety, it makes you wonder if this is the direction they will continue to go. Bowling is one of those games that is fairly simple in premise, but can be a challenge to create replay value for on almost any system. I think to date that Wii Bowling is probably my favourite video game iteration of the sport, but Smash Bowling 3D does a good, but not great, job of giving you the game on the go.

I feel like Smash Bowling 3D gets more right than wrong. The 3D effects are decent, but not great. Still, they do not get in the way or make my eyes hurt like another bowling title I reviewed recently – so I will put this down in the plus column. The lanes all look nice, but they are essentially flat backdrops. It is nice to unlock a new locale and bowl in it for the first time, but it seems like there could have been something more from the different lanes, whether it is a midnight bowling mode or maybe a crazy mode with bumpers in the gutters – something different. 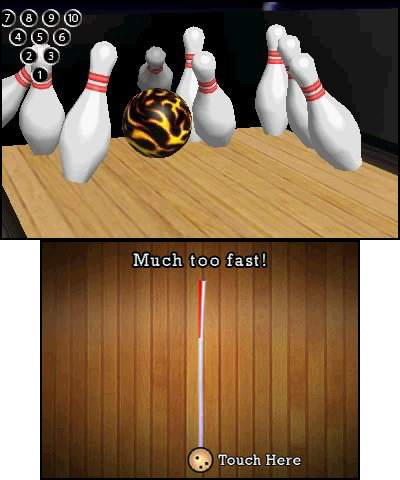 I think perhaps that is where these bowling titles are letting me down lately – the vague ‘something different’. Of course, something different just for the sake of being different does not necessarily help either, especially when the control scheme is a bit of a mess – such as what we saw in Undead Bowling. I cannot say exactly what I am looking for – more modes? Some sort of progression or story mode where you can learn more control over the ball or throw harder, or different types of bowlers to compete against via AI would all help, I suspect. Mostly though, you are competing against yourself – unlocks and awards come in the form of new high scores or types of accomplishments in Smash Bowling 3D.

On the one hand, that does work well because you can unlock most of the content pretty quickly, but that carrot of a better personal record is still dangling there to help keep you invested. Still, the game’s lack of depth does not give you a reason to come back for more on a regular basis – mostly when you just have a quick bowling fix to sate.

All of this being said, one thing I really did like was that Smash Bowling 3D does present two very different kinds of control schemes. One is the touch scheme, where you use a series of sliders to try to pre-determine how you want your shot to look, from power to spin. Then, you use your stylus on the bottom screen to try and swipe a bowling trajectory that is played out on the screen above. This measures everything from your accuracy to your speed as you try to follow the plotted line. It is a nice way of trying to integrate the bottom screen, but of the two control options, I liked this one less.

The other option is simply a button press one. I certainly felt like I had more control on my shots. My first game in I had four strikes in a row, and marked on all but two frames (a pair of splits there was no recovering from). The first shot or two took a little getting used to, but basically you get to apply some strategy elements: where to line up to start. Then you have a series of small, quick mini-games. You try to stop a vertical meter to assign power to your throw. You have to stop a side-to-side meter to put your spin on the shot. There is an arrow swinging back and forth along the pins where you try to stop it to create your throw’s trajectory. Both methods are pretty intuitive, but the button press one was more enjoyable from my standpoint.

Smash Bowling 3D is certainly not a bad game, it just does not have a lot of hooks to keep you coming back for more.