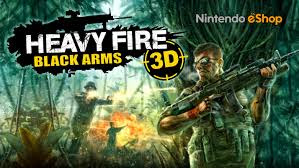 Last year’s 3DS eShop Heavy Fire offerings, Special Operations 3D, fell far short of what Teyon previously delivered on the budget retail PS3 release, Heavy Fire: Afghanistan, even though it chose to stick with the same dusty desert setting. This year, Teyon takes us out of the desert heat and into the shade of the South American jungles to track down drug smuggling cartels. But does making the move out of the desert lose all of the game’s heat in the process?

Just as with last year’s Special Operations 3D, the light gun gameplay transitions to the dual screen setup of the 3DS in a suitable manner. Tracking the stylus along the bottom screen to move a cursor on the top screen works very well, and does so in a fashion that still keeps the gameplay at hand challenging. The game also works well regardless of hand preferences, with the L/R buttons and the analogue stick and “B” button acting as the respective fire/ reload buttons.

Upon entering the jungle, the first thing you’ll notice is that Teyon has delivered on the visuals here. The greenery in the environment looks quite pleasant with the 3D effect enabled and at times, there’s even a good bit of action going on onscreen, with enemies firing off rocket launchers at enemy helicopters and the likes thereof. The framerate does take a noticeable hit with the added effect though. 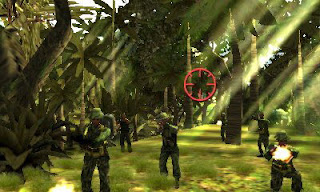 The soundtrack and audio effects are still the very same that you’ve heard in past entries, merely dropped right over into this new release. The basic gameplay structure is also unchanged, with enemies rushing the screen and only posing a real threat once a red exclamation mark appears above their heads. You will again start out with only a pistol and through successful missions you’ll collect the cash needed to purchase and upgrade new, more powerful, weapons.

With only six missions available, Black Arms 3D would seem lacking on content, but while previous entries have offered a steep level of difficulty, this release goes near over the top in some sections – replaying the early missions for extra funds to buy/upgrade weapons is paramount to successfully completing the campaign. It isn’t just tough though, because it can come off feeling cheap at times too. There are a few enemies scattered about that literally fire at you the instant that they appear and with such limited health – no health packs – and the lack of mid-level checkpoints, you’ll find yourself trudging through the levels over and again trying to figure out how to survive these choke points.

It’s clear that Teyon put some effort into bringing a better Heavy Fire experience to 3DS owners with the release of Black Arms 3D. With the addition of the new jungle environment and action set pieces, there’s a good deal of promise shining through. Sadly, the unbalanced difficulty finds the grenade pins being pulled out a little too early. Still, with its cheap asking price, those looking for a real dose of punishment in an on-rails styled shooter could potentially find enough enjoyment worthy of enlisting here.