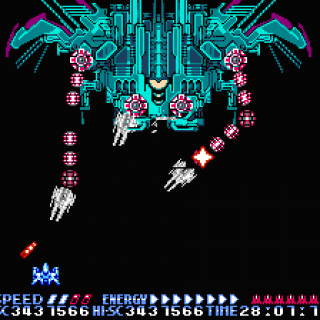 As an optimist, I have to believe that at some point in the development of Summer Carnival ’92: Recca, a soft spoken member of the team finally mustered up the guts to ask whether the game was going to be too fast for the average player. After playing the finished product, it’s a bit of a pity that our hypothetical developer friend was unceremoniously tossed out a high window.

Because you see, Recca is fast. This is the game where enemies can pop onto the screen, kill you and then fly off before a second has elapsed. With absolutely no way to strategise or plan ahead, Recca revels in making the player resort to twitch gameplay, providing an incredible degree of challenge which will leave most players defeated and dejected.

But first let’s talk a bit about history. Summer Carnival ’92: Recca’s odd name can be attributed to the fact that it was programmed not for commercial sale but instead as part of a development contest. And for that reason, it was never seen outside of its home country, and within which it still resides as quite a rarity. With the Super Nintendo towering over the NES in terms of sheer processing power at the time of development, Recca stands as a testament to what the original grey toaster could do. Playing in the 3DS Virtual Console, it’s easy to forget that this game at one point ran on a cartridge for the NES – the sheer sense of speed, volume of sprites and perplexing absence of slowdown or even sprite flickering helps make Recca a marvel of programming. In the tech department, it’s clear that the people at Naxat Soft really knew what they were doing. 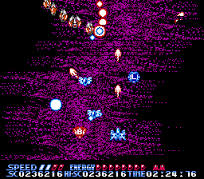 Sprites whizz across the screen at high speed and yet still contain a fair amount of detail, while the dynamic bosses are interesting to look at. The backgrounds also have a hazy, psychedelic feel which adds a lot of character compared to the simpler black-background-with-stars approach that other 90’s SHMUPs took. The music is frenetic and goes to great lengths to add tension, although some repeated sound effects can become grating.

Unfortunately, after the novelty of playing a ludicrously fast game wears away, the tedium of playing a ludicrously fast game sets in. Recca is incredibly taxing to play simply because its speed requires undivided attention from the player at all times. Waves of enemies snake down the screen towards your ship with no time for breathers. Thankfully, your ship’s weapon is more than adequate for the job, and your bullets not only destroy enemies but also enemy bullets, allowing you to carve a small path of safety amidst the chaos. 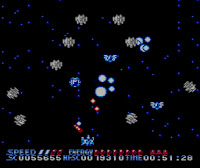 Letting go of the fire button for a few seconds also charges your weapon, allowing you to unleash a lingering ball of destruction which, if strategically placed, can buy you some respite. The upgrade and sub-weapon system is actually quite robust, giving you a variety of options with multiple levels, although managing the upgrade pickups while avoiding enemies is challenging. And yet despite these options, you’ll constantly find yourself dying from momentary lapses in judgement which send you careening into hostiles. Because the game is just so darned fast, any small movement you make can lead to an unnecessary death and there is a distinct sense of repetitiveness to dying and having to repeat the same level over and over. You just don’t feel responsible for your mistakes when a slight strafe to the right makes you collide with an enemy which wasn’t even on screen a second ago. Time and Score Attack modes do provide alternative ways to enjoy the game, but the overall feel of the gameplay is the same.

In a time where sprite flickering and slowdown in 2D games is non-existent, it is harder to appreciate a game like Recca for all its technical wizardry. The reason why shooters have not escalated to Recca’s speed despite advances in hardware is that when a game runs this fast, the gamer loses the sense that they are becoming more skilled at the game with each further attempt. Deaths feel less avoidable and achievements aren’t as dependant on player skill. So my advice would be to approach Recca with caution. It’s a worthwhile download just for its history and sheer rarity. After you’re done marvelling at how Naxat Soft got this beast to run on the NES however, you’ll probably find that the core gameplay isn’t all that enjoyable.