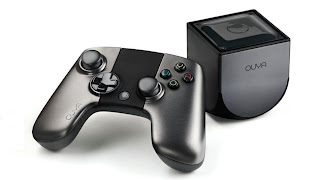 Ouya has found itself in a spot of bad PR recently. First the company’s official Twitter feed retweeted an enthusiastic fan’s tweet that may or may not have shown Nintendo’s Super Mario Brothers (NES) being illegally played on an Ouya console and now it has briefly released an advert on its YouTube channel that has created an uproar of controversy throughout the gaming media yet again.

In this short animated advert, it shows an unshaven gamer in his underwear becoming so infuriated with the fact that he just spent $60 on a AAA title called “Medal of Duty”, that he starts to vomit and rips out his own spine to beat himself with. Yes, it is grotesque and violent, and as with anything grotesque and violent this has upset some people.

Naturally the following video comes with a “this may offend” disclaimer:

And here’s why the advertisement might not have been such a bad idea as the critics might want you to believe;

This past weekend also played host the the 2013 MTV Awards, and over the last week the official Twitter feed for the show has been awarding gift bags to Twitter followers. If you take a good look at the list of things that were being given out in these gift bags you will notice that the Ouya is one of the many items that was given away.

When I saw the ad for the first time, I instantly thought about the shows that were centre stage in the 90’s on MTV; the likes of Beavis and Butthead, The Brothers Grunt and The Head. These animated shows quite deliberately pushed the boundaries of what is good taste and have earned the descriptor of ‘disruptive,’ ‘alternative’ and ‘risky.’ In being social commentary these shows earned themselves a large fanbase.

If you take a look at Ouya’s own marketing, from the original Kickstarter the console has been positioned as an ‘alternative’ console, and the CEO, Julie Uhrman, has stated that she wants the Ouya to be seen as a disruptive piece of technology. The official forum has since stated: “This is not our official ad. We are experimenting with animated content and posted this video briefly to get feedback from our community.” Was this to get feedback to see if it should invest the money to run this ad throughout the 2013 MTV Music Awards, to an audience that might be receptive to the kind of content and theme?

Scanning the Internet, you’ll find that the majority of those who are upset by the advert seem to think that it is either “disgusting” or “directly attacking the major publishers that the console needs to be successful.” Disgusting as it might be, there’s certainly a niche for things that are disruptive. While it is true that the shows on MTV that I previously mentioned were short-lived, they found their niche and MTV as a whole has thrived on being an alternative to traditional media. Other major networks were obviously influenced by the ‘disruption’ that became so popular on MTV and its alternative media styles. ESPN’s X Games capitalised on the adrenaline and music crazed fans that MTV played host to, and went on to launch specialised sports networks aimed at just this alternative crowd.

The other misconception here is that Ouya needs the major players in the gaming industry (EA, Ubisoft, Activision) to remain a viable gaming platform. We’ve seen this sentiment repeated over and again in other sites’ reviews. This is only true if you assume that the Ouya needs to sell in the same numbers to the same audiences as the incumbent hardware providers. Ouya was launched as a platform aimed at small independent developers for content, and anyone who buys an Ouya is doing so for that precise content.

Major platforms, need full mainstream market support, full third party support and a wide range of first party titles that equate into a console that pushes into the range of 60 million or more consoles sold worldwide. Anything less than this is argued as a ‘failure’ as we’ve seen with the Vita and the Wii U. I argued against this in my Ouya hardware review; the Ouya is not in the same market as the current or next generation consoles.

Ouya needs to find a way to attract attention to those who aren’t as interested in owning a single PS4 or Xbox One as their only console. It needs to attract those gamers who want an “alternative” console – those gamers who might be sick and tired of these yearly big budget releases that only offer minor improvements and gameplay elements with each subsequent release. Maybe had this advert ran during the 2013 MTV Music Awards it would have attracted a whole new batch of gamers with its $99 install price and the promise of “free” games, which there are indeed a lot of.

Whether it was good or bad for Ouya in the long haul, that ad did bring a lot of attention to itself. And while it isn’t a truism the idea of “there’s no such publicity as bad publicity” can be a line for marketers of alternative products to adopt as a philosophy. With Ouya not trying to compete with the major players within the gaming industry, it has already set itself apart as the wild child in the industry; actually acting like such might be just the publicity it needs to find its console in the hands of the gamers that would enjoy it the most.