Nostalgic gamers that grew up in the 90s typically have fond memories of side-scrolling beat-em-ups. Gamers of all ages lined up on weekends to have their go at popular cabinets like The Simpsons, X-Men and Teenage Mutant Ninja Turtles – pockets filled to the bursting point with quarters. For many, these were the ‘glory days’ of the gaming industry. While recent titles like WayForward’s Double Dragon Neon and The Behemoth’s Castle Crashers have successfully brought this gameplay back to form in recent years, Atlus’ upcoming Dragon’s Crown release does just this and makes the retro style of gameplay feel fresh once again.

Jumping into Hydeland is so very pleasing to the senses. Vanillaware’s beautiful hand drawn visuals take you into highly detailed worlds that could be stripped straight from the mind of Gary Gygax himself. From the lush countrysides to the flooded remains of a crumbling castle, the amount of detail that is taken to bring each and every aspect of these environments to life is nothing short of stunning. This is just as true for the characters and the large cast of enemies as well. Each and every frame of animation is painstakingly crafted so that they’re animated as smoothly as possible. I’m not one that typically give lavish praise, but when a game’s visuals are so fantastic that you find yourself dying simply because your staring at how beautifully ferocious a level boss is – the praise is much deserved. 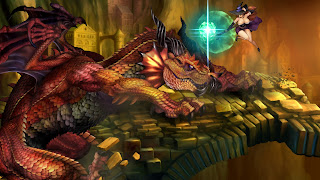 Once you can stop staring at the screen’s beauty, you will find yourself drawn into the beat-em-up action that is at play here. Six character classes are on offer and each of them brings a unique play style to the table. Where the knight and dwarf offer the basic button mashing gameplay that’s typical of the genre, tackling the wizard or sorceress classes will find you playing the game entirely different. The sorceress, for instance, requires you to attack enemies up close to gain MP, which can then be used for a powerful ranged spell attack; it is a take and give back gameplay that is difficult to grasp at first, but extremely rewarding (powerful) once properly levelled.

Attention must be drawn to just how well Dragon’s Crown’s difficulty is balanced between the casual and hardcore players by these character classes as well. A casual gamer can easily grasp one of the brute characters’ play styles and play along side a hardcore player with one of the harder classes with practically no frustration at all. The first 15-20 hours of the single player game not only features a level cap, but a set difficulty. Once the first nine levels are finished, you can start playing the game with others online or local co-op on the PS3 version of the game. The Vita version, however, only offers local co-op. This isn’t to say that you won’t have ‘friends’ to play with, because both versions have piles of bones scattered throughout its dungeons that can be revived into companions that willingly fight by your side. These A.I. companions are efficient fighters, and in the later levels are an absolute necessity in single player.

The on-screen chaos that ensues with four players and a swarm of enemies can become so clustered that you lose sight of your player at times. This might seem like it would be frustrating, but you’ll be jamming at the buttons so furiously while searching for your player that you want care one bit; yes, it is just like the good ole days with a pocket full of quarters. The PS3 version’s frame rate stays blazing fast with three online mates, even when battling bosses that tower the entire screen in size, and it is here that Dragons’s Crown is at its absolute best. There’s no voice chat to create distractions, just you and a few friends (or random players) beating up anything and everything, and, well, that is just how it should be. 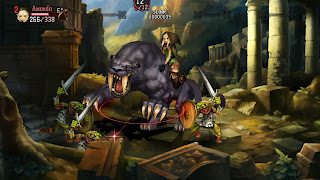 While the Vita doesn’t offer this feature, it also finds its frame rate struggling to keep up when the action gets overly intense at times too. It isn’t often, but it does happen. But this isn’t to say that the Vita is the lesser console to play Dragon’s Crown on either, because some aspects of the game are actually stronger on the portable console, besides it being just that: portable. During your quests, each level has numerous chest, hidden paths and hidden items within it as well. On the PS3 you use the right analogue stick to move a little hand to interact with these things – this leads to some very comical moments in the online multiplayer on the PS3 – but you simply tap them on the Vita.

While on paper this might sound minor, it makes the gameplay much more fluid, and even more so once you unlock the ability to use rune stones to cast level bonus spells. Lastly, even though there isn’t the option to cross-buy this title, it does feature a cross-save mechanic; if it’s feasible for you to grab both versions, you won’t regret doing so.

Regardless of the version though, the amount of replay value is astounding. Unlockable difficulties and a significantly extended level cap open up once the game is completed through the first time, which really, only gets you started in Dragon’s Crown. Considering you can’t take multiple created characters through the game simultaneously, the drastic gameplay differences keeps you engaged when going back for more with a new character. One thing that is a plus is that you can turn off the narrator and written text. While the game’s storyline is interesting the first time through, the narrator will grate on your nerves thereafter. Why? Because every time you step foot in the game’s central hub, where the shops and guild (and many other places) are located, the narrator tells you what you need to be doing to progress the storyline. Step out of the weapons shop and he starts talking. Step in and then out of the guild – he starts saying the exact same dialogue over again. Turn him off after finishing the storyline; you will be glad that you did. 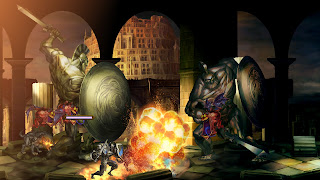 Aren’t we forgetting something?

But isn’t there something else in Dragon’s Crown? Something, well, questionable? There’s been a lot of discussion on a certain aspect of the game’s artistic approach, based on how the majority of the women featured in the game are designed. I’ve already told you how beautiful and fluid the game’s art style is, but what I neglected up to this point is that not only the women, but all the characters in the game feature some sort of exaggerated body modification. The game’s designer, George Kamitani, did indeed use the kind of art that you would see in old Dungeons & Dragons work as a focal point, but he also wanted to make the style of these characters his own. The end result is that the female characters are overly endowed to a point that is, in my opinion, comical.

This resulted to an industry wide debate on the objectification towards women in video games, which in turn sparked a fantastic opinion piece by our very own Editor-in-Chief, Matt Sainsbury, following a severe backlash towards a female writer at Polygon, whom found real issues with the game’s artistic approach in her review. While Kamitani uses a unique mix of the typical western Dungeons & Dragons visual styles that are commonly found for these character classes in Dragon’s Crown, his variation of these characters takes an obvious inspiration from Japanese anime. While this does indeed makes the characters extremely unique, it also finds the potential to cross the lines of what is acceptable in different cultures around the world. 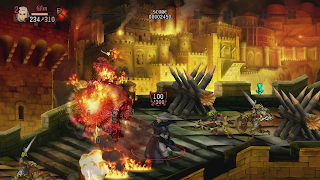 The game also features other half-naked women (one being a mermaid) that are in need of rescuing. This does indeed further the debate on the objectification of women within the game. But, doesn’t the game also feature women as immensely powerful class characters? Yes, it indeed does. It also features a decrepit old man, whom was a once power figure in Hydeland too. Is the discussion of objectification actually a reasonable one for, or against, Dragon’s Crown? That is for you to decide for yourself. The important thing is that this game has officially started a needed debate within the industry – one that will help the industry to further mature as it progresses further. Know that this content is there, but in my opinion, Kamitani’s artistic approach to Dragon’s Crown only blossoms the fantasy in this world to life even more so.

Vanillaware admirably brings Dragon’s Crown’s beautiful fantasy worlds to life with a hand drawn visual approach that is nothing short of masterful; equally accentuated by an outstanding soundtrack arrangement. While certain aspects of the game’s artistic approach have started a healthy industry debate, it doesn’t stop it from bringing the classic multiplayer beat-em-up gameplay that had us filling arcade cabinets with quarters many years ago back and better than ever. Vanillaware, I crown you the new beat-em-up genre victor.