Terry Cavanagh is a name that I expect that most any of you reading this here at DDNet will be quite familiar with (Super Hexagon, anyone?). He’s been developing short freeware indie games and publishing them on numerous digital services for quite sometime now, and Don’t Look Back is one of his more renowned works. Cavanagh has been unloading his titles on the Ouya and playing it on the indie console just feels so, well, right.

In his typical minimalist style, Cavanagh uses a limited colour palette of mostly black and maroon colours to set the mood for this short platforming title that finds you stepping into the depths of underworld to reclaim your lost loved one. Even with its Atari-esque graphics, it’s quite amazing just how effective this deadly environment is brought to life. One second you’re falling into a black abyss and seconds later you’re running for your life as the pixelated earth crumbles from under your feet below.

The game is broken into extremely short segments, with each one becoming increasingly more difficult as the game progresses. These segments help to alleviate the game’s difficulty though, seeing how you never spawn too far from where you last died, which is a good thing, because you will die a lot in this game, as the difficulty is on par with some of the more difficult NES titles. 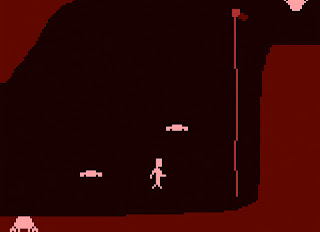 As you travel further past death’s door, you will find yourself facing a couple of enemy bosses. Even with the limited move set that is nothing more than running, jumping and shooting, learning the enemy bosses’ movement patterns is decisively retro, and again, just a lot of fun. The final boss is terribly difficult, but stick with it, as doing so will find that Cavanagh emotionally closes the pages of this fantastic indie title quite perfectly.

It’s good to step away from the cinematic big budget titles that fill retail shelves in this modern era of the gaming industry and let a simple, yet creative little indie game take us away for a small while. Depending on skill levels, Don’t Look Back will only take about 30 minutes to complete, but it is a half hour of complete immersion that is hard to find in this day and age. If you’ve taken the plunge on the Ouya, there’s no reason not to freely download Don’t Look Back; you’ll be glad that you did.