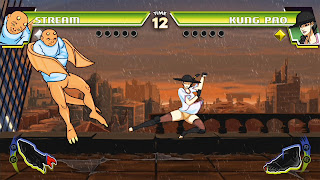 I get that Divekick is meant to be more parody than in-depth game, but I also didn’t find myself laughing.

With that said, the premise is an interesting exercise in minimalism. Just how far down can you reduce the fighting game, in terms of both buttons and complexity, while maintaining a game that is indeed a fighting game? Divekick makes a compelling case that two buttons are enough to create a game in the genre, and yet also manages to demonstrate just why the modern fighting game needs that complexity.

Divekick is built entirely around the idea of jumping, and then doing a dive kick. I guess that’s where the name comes from. There’s no buttons for movement; the only way to close on an opponent is to jump and dive kick the way forward. And in fact it’s possible to play multiplayer in this game on the one console – one player uses two of the direction buttons on the D-pad, while the other uses two of the face buttons. Why anyone would want to do that I’m not sure, but it’s nice that there’s the option there. 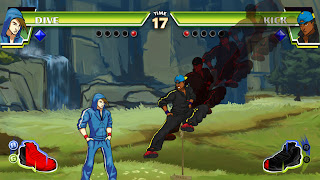 Now, if this was all there was to the game then it would be possible to argue that it’s not really a fighting game, but Divekick manages to, in those two buttons, pack in special attacks and unique fighting styles into each of its dozen or so fighters. These characters are all effective lampoons of fighting game tropes, from big overweight dude right through to girl-whose-skirt-can’t-stay-down. There’s also some of the precision and skill required of a good fighting game built into Divekick. A single hit will K.O a player (the health bar at the top is part of the joke), but between the dodge button and the fact that an attack that lands on the head will stun the opponent for the next round, basically guaranteeing a free hit, mastering Divekick will take more work than it’s really worth.

There’s a couple of other systems in there, including a power meter that builds up through the game and a gem system which opens up some other strategic options. It’s all very clever in working around the limitations of two buttons, but after the first match (where you’ll genuinely laugh at the lunacy) and the second (when you’ll appreciate the general effort that’s gone into the game), by the third game I found myself uninterested in playing it any further; the novelty of the whole experience had worn off and there was nothing left behind to keep me coming back for more. 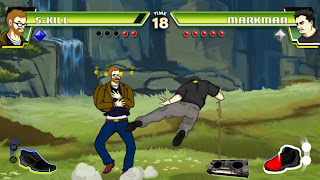 There’s a fine line that comedic games need to take – it’s fine to lampoon the genre norms, but in doing so you also need to offer an alternative to that norm that is entertaining and engaging. Otherwise you’re doing nothing more than making a genre game that tells players “it’s OK we’re doing the exact same thing as those games, because we’re funny!” Divekick doesn’t offer a compelling alternative. The two button structure is interesting, but only for the first half or so. The game’s blurb promises story modes and compelling online play, but the stories of each character read like they were written on the back of a napkin after an especially heavy night at the pub. The online mode works, but this is a genre filled with very compelling online fighting games, even on the Vita. Divekick doesn’t come close to the kind of competitive depth that hooks people on those other fighting games.

Characters might be lampooning fighting game tropes, but they lack genuine personality of their own. I can’t see Jessica Nigri rocking up to a PAX show in a Kung Pao costume, for instance. The announcer’s voice is enthusiastic, but unlike in a game like Mortal Kombat, this fellow becomes annoying. Quickly.

More than anything else though, Divekick annoys me because I paid good money (and it’s not a cheap game, by indie standards), for a game that seems to think it’s funny to be inferior to the best games in the genre. As a critic I like to reward earnest efforts to do right by the player, even if execution lacks when compared to what the masters of the form do. Divekick, meanwhile, is like the movies produced those fools who keep making “comedies” like Not Another Teen Movie, the Scary Movie series, Epic Movie or Vampires Suck. It’s a parody that doesn’t seem to realise that it’s failed to be better than its material.

The games industry will eventually throw up a Mel Brooks. But not yet, it would seem.

Killer is Dead and misogyny; how do critics miss the point by this much?