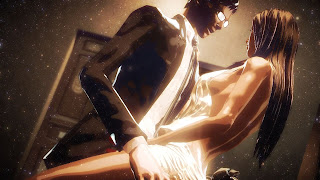 Goichi Suda has done it again. He’s created a game (Killer is Dead) and released it to a mass outcry of misogyny from the critical community. It’s happened in his games before (see Lollipop Chainsaw) and once again the people making the complaints are, in taking a very simplistic approach to their analysis, missing the point of the game.

This time around it’s the “gigolo” missions that take place in Killer is Dead that are drawing the ire of the critics. Here’s a direct quote from a review, but note that what’s quoted below is a common analysis of the game:

“Enter Gigolo Mode. Between main story missions you’re allowed to pick up sidequests. Some of these are basic challenges, like “go back to the level you already played and kill a bunch of fodder enemies.”

Then, there are the Mondo Girl missions, where you bring women out on dates and ogle them.”

Great. Cool. So far I actually agree with this review; As I’ve been playing through Killer Is Dead I’ve been experiencing it as a game which takes the popular “dating game” mechanics found within exploitative Japanese games and uses it in an ironic context to highlight and consequently attack the trope. These Mondo Girl missions are Suda, in his subversive-punk approach to aesthetics and gameplay, criticising the Japanese games industry that has given birth to games like Onechanbara. It’s using visual hyperbole to make a point about the male gaze in games.

In fact, Suda’s approach to making games is not that different to Quentin Tarantino’s approach to making films. A film like Kill Bill is deliberately hyperviolent in order to open up discussions about violence in films. Suda, the Japanese Tarantino, repeatedly does the same in using hypersexuality to question the use of sex in games.

All of this stuff is so patently obvious that it amazes me that anyone could possibly misinterpret it. But let’s read on in the aforementioned review, shall we?

“Killer is Dead has turned the fabled “male gaze” into an actual game mechanic. In order to build up the courage to give women presents to get them to awkwardly grant you sexual favors [sic] (and unlock new weapons), you have to ogle their breasts and lap and then eventually you get a new pair of glasses that lets you see through their clothes and creep on their underwear and—I can’t believe a game like this even exists.

There is no way to play this game and not feel like a dirty, crusty, leering old man. “Hey, sweetheart, how about I give you this piece of gum and then we go make the beast with two backs out in my van? Don’t you like my sweet cyborg arm? Just keep saying the same dumb platitudes over and over again, conveniently looking away so I can stare at your panties through your dress.”

Before your eyes fall out of your head and you pull a muscle screaming “But Hayden, it’s a video game,” or “it’s satire,” well, save your voice. I hear you, loud and clear. Games aren’t always serious business. I enjoy many things that are beyond the pale, or on the shadier side of that gray line. I love The Fast and the Furious movies. Some may say that’s hypocrisy. I say it’s drawing a line. A man’s gotta have a code.”

So, there we go. This critic (and again, many others writing much the same thing as him), seems to think that the only way a game can be subversive is for it to be the kind of “haw haw” satire that The Fast and the Furious provides. To read many critics reviews of Killer is Dead is to believe that the games industry is stuck at a time where irony doesn’t exist, hyperbole is not a artistic tool, and the idea that making people uncomfortable (“feel like dirty old men”) couldn’t possibly be the actual point that Suda is making with the game. To read these reviews is to assume that the games industry is stuck in the 40’s, before people woke up to the idea that there can be deeper meaning in a work beyond the most shallow of surface impressions.

This has happened before with Lollipop Chainsaw. That game was also derided as exploitative by the broad critical community. Those same people somehow missed that the game was actually designed from start to finish to criticise exploitative films and games. I did write a piece about that back then too; click here for that piece.

Killer is Dead is deliberately exploitative and if you feel dirty while playing the ogle scenes then Suda’s achieved what he quite clearly set out to achieve. Just as Lollipop Chainsaw went out of its way to make you feel silly for looking up Juliet’s skirt (courtesy of that “pervert” trophy that would subsequently be exposed to your social network), Killer is Dead wants you to feel uncomfortable. Just as the movie Irreversible featured a 15-minute single-take rape scene that was gratuitous because it wanted the audience to feel sick to their stomach, Suda’s work here is deliberately nasty and unpleasant. It’s not to titillate, it’s not to amuse. It’s to attack.

Sexism in the games industry exists, and in Japanese games it’s even more prevalent. There are games that feature a very negative portrayal of women indeed, this is undeniable. This is a cultural issue and it needs to be addressed. I think the entire (rational) community are on the same page there. A good start would be if the industry’s critics and journalists went back to school and did a class or two in arts and feminism to learn about a couple of key phrases. Suda’s games are ironic, subversive and self referential. Not misogynistic.

Critics, if you can’t mature the level of engagement you have with games, they’re never going to be considered art.