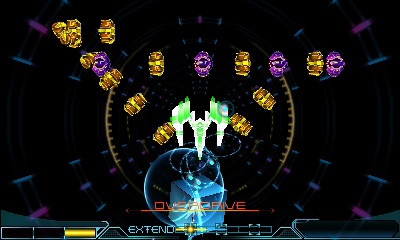 Sometimes games do not need deep, branching mechanics or involved story lines carried along by fully voice cutscenes. Sometimes a game just needs to be something you can pick up, play, have some fun with, and then go about whatever else you had in mind for the rest of your afternoon. Chain Blaster is one of those games, where it does not have the kind of complex hooks that a full priced title like Star Fox 64 3D might provide, but what it does give you is an entertaining shooting experience at a reasonable price.

What you have here is a shooter that reminds of classics like Galaga, where you are sitting on a screen, taking on wave after wave of enemies while attempting to stay alive and rack up the highest score possible. The primary hook comes in the chain mechanic, which gallows you to string together a series of hits capable of taking out an entire enemy wave. It is a lot more fun than the basic shooting mechanic, and adds some variety to what could otherwise have been a pretty dull shooting affair. 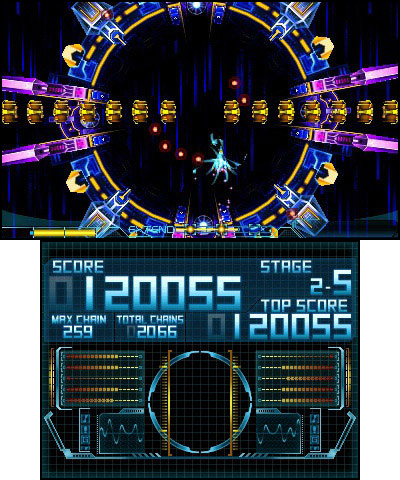 You can unlock another ship later in the game, and while it does not have the basic firing cannon, it comes equipped with a new kind of chain shot that you can place instead of fire. Another ship or two like this, where some variety in the mechanics is introduced, would have been welcome, but the real draw here is to try and rank up on the online leader boards. Here you can compare scores and max chain combinations. It would have been nice to have a narrower way of measuring rankings, like against friends. From what I can see, everyone is just ranked against everyone – but I always enjoyed it in titles like the various Zen Pinball games where I can just compare my scores against those of my friends.

The biggest problem with a game like this is that while the visuals, sound and techno style music are all perfectly nice, they are also perfectly repetitive. The lack of variety can almost numb the senses just a bit if you play for an extended period of time. That is not necessarily a horrible thing in and of itself – I was able to zone in and really concentrate on the waves of enemies, but that does hurt the game’s replay value a bit. As I said in the introduction, you do not need a lot of deep mechanics and stories – but they certainly help keep you interested. 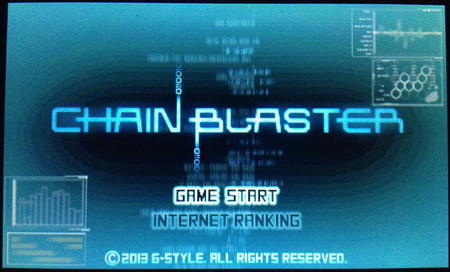 Chain Blaster comes with a vague story about how you are battling off an evil computer virus, but really other than that, there is no mention or reference to a plot from that point forward.