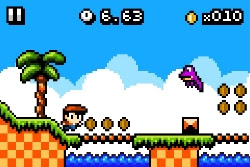 Some gaming enthusiasts might criticise the App Store as being a collection of watered-down versions of arcade titles and console games that we’ve come to know and love. And there is some truth to this argument. For every original game or quality port that makes its way onto iOS devices, there are tons of games that simply attempt to cash in on the aesthetics and mechanics laid down by much better titles (just Google Search “iOS Mario Clone” and see what I mean).

But as much of a problem as shameless rip-offs are, my issue with the mobile game market is the similarity between titles on the platform. If you’re in the mood to fling birds or match three, there are hundreds of clones at your disposal, each with slightly different visuals, controls, or in some cases, payment models.

And maybe that’s why I’m so torn on Kid Tripp, the first title from Not Done Yet Games. On a purely technical level, the game looks, sounds, and controls great, and offers up a handful of levels for the low price of $0.99. The problem is, the game feels like so many other platformers on the App Store, which begs the question “Why should I play this?” 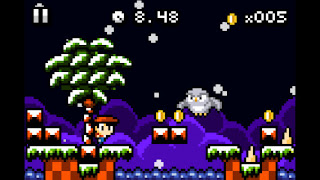 Going back to the aforementioned presentation, I have to admit, I was pleasantly surprised by the game’s look and feel. The visuals take the best from the bright and colorful palettes of your favorite retro Mario and Sonic games, and the chiptune music is equally cheery. It’s good fun to watch in motion, though you’ll be spending most of your time focusing on the actual platforming.

In a wise move, Not Done Yet has eschewed virtual buttons for a simple control setup which is dependent on which side of the screen you are using. Tapping the left side of your iPhone or iPad makes your player character (who looks like some hybrid between Ash Ketchum and Ness) jump, while tapping repeatedly on the right hand side of the screen shoots out projectiles in front of you, which can clear away obstacles and enemies. Holding down the right side however, controls your movement speed, allowing you to sprint, or… sprint faster (it’s a running game after all).

If you haven’t guessed by now, this means you have no control on the direction you move in. This is all handled by the game; not unlike infinite runners such as Canabalt or Temple Run, you are constantly moving forwards, and there is no ability to come to a complete stop. Where Kid Tripp differs by replacing endless running with discrete stages and worlds, each with their own visual theme (for a game that borrows visual elements from retro platformers, expect the same world themes you’ve come to know and love). There are 20 levels in all, which is a bit on the short side by some standards, but there are medals and achievements to unlock, along with record times to improve upon. 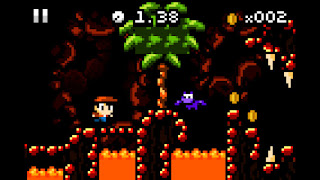 But even with its many strengths, Kid Tripp fails to distinguish itself from other games in the genre. After the first few levels or so, the game begins to feel monotonous, which isn’t aided by the level design. While some levels to rely on twitch platforming, there are a handful of stages that require you to use carefully timed jumps to clear a gap. For example, there is one stage in the latter half of the game that tasks you with jumping on enemies in order to leap over a lethal pit. It might sound simple, but the enemies spawn in relation to your distance to them, meaning if you aren’t travelling at the right speed, or you jump a tad too early, you’ll often take damage, which results in instant death. With fixed levels as opposed to randomly generated areas, you might clear through a few levels quickly, only to be hung up by one or two frustrating jumps in a lone stage (and no, you can’t skip ahead).

The shooting mechanic also wears thin, simply because you can simply spam shots, which is only limited by how quickly you can tap the screen. While there are some levels where you have to keep certain enemies alive (usually for the purpose of jumping off them to gain extra height), for the most part, you can shoot to your hearts content. It makes me wonder why it was included in the first place, considering there are no limits on ammo or shot speed.

Design decisions aside, Kid Tripp serves up a heaping of tough-as-nails platforming, is technically sound, even on the ancient iPhone 3GS I happened to play it on. Still, the nagging issue is not necessarily the gameplay, but how similar it is to other games on the market. If you’re in the very specific mood for a simple yet difficult retro platformer, you can’t go wrong with Kid Tripp, but even at the bargain price of $0.99, it does very little to set itself apart from the handful of similarly-built titles on the mobile market.