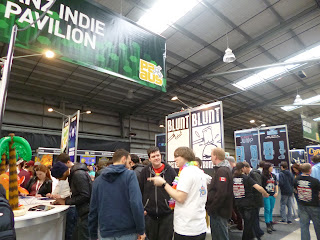 Last weekend was the first time the Penny Arcade Expo (PAX) was held in Australia. Developers, gamers and the cold weather all came down to the Melbourne Showgrounds for the weekend to celebrate all the things we love about this hobby.

Being as this was the first time PAX had ever been held in Australia, I went in with very few expectations. On Friday morning, a good two and a half hours before the gates were going to be opened, the line was huge. PAX had been divided into various sections. There were two massive halls were dedicated solely to gaming. Tabletop games like Magic the Gathering took up heaps of space, as well as a bring-your-own computer competition. There were also four different theatres for panels, concerts and various other things, but more on that later. And finally we had the Expo hall, probably the most enjoyable part about PAX. It was a huge room where the big guns like Nintendo and Ubisoft could be joined by a huge number of indie Aussie developers.

Throughout the show there were lots of events and panels that offered gamers some great insights into the games industry taking place in the four theatres around the Showgrounds. And this is where the worst part of PAX Australia reared its ugly head. Lines. Oh man were there some serious lines. If you didn’t line up an hour before the panel you were hoping to get to started, you most likely weren’t going to get a seat. I was talking to a few developers who had needed to line up for the Ron Gilbert speech at 9:30, half an hour before the gates had opened. It was ridiculous, and impacted on the experiences of many people involved. I’ve heard rumours that the venue is going to be bigger next year to accommodate for the large crowds. If it doesn’t, bring a tent.

The best part about PAX Australia was the focus on games and gamers coming together however. Reportedly, the wireless signal from the thousands of 3DS’ streetpassing one another caused the EFTPOS machines to come to a steady halt (I’m sure the vendors selling stuff at the show would have loved that – ed), as well as any hope of using your phone within a large radius of the Expo hall.

And the real winners of the show were the indies. The Australian Indie Showcase, which consisted of; Antichamber, Black Annex, InFlux, DUET, Fractured Soul and MacGuffin’s Curse had a line to play their games nearly the whole time. Others such as Town Craft, Dungeon Dashers and my personal favourite Armello were also packed. World of Tanks and Sennheiser lost a lot of points for their inclusion of booth babes. It wasn’t needed and it is amazing that the people who put up these booths haven’t clued into the negative publicity they now tend to draw. World of Tanks would have been more than impressive enough with just the huge Tank (and booth) that was there.

Nintendo’s booth was also quite popular, even though it was underwhelming. Six 3DS’ had The Legend of Zelda: A Link Between Worlds, while 3 Wii U units were dedicated to Pikmin 3, which is being released next week. Aside from Zelda, there was nothing really eye-catching as there was little of the huge E3 game line-up available. Saints Row IV always had a line outside, and although I didn’t stay around to talk to people as they left, if they felt the way I felt they would be very disappointed. Another crowd favourite was Johann Sebastian Joust. Quite amusing watching six people prance around trying to be as graceful as possible.

There was also a lack of cosplay, which was sad to see. A lot of people who came dressed up through went all out. Lastly, I don’t think the show could have been what it was if it wasn’t for the work of the Enforcers. They did a great job and everyone who spoke to them would agree.

Would I do PAX Australia again? Yes. Should you buy a three day pass the moment the go on sale for 2014? Absolutely. Though there are definitely areas in which the expo could improve. However there is one thing I really hope doesn’t change; if next year sees an increase in the big name developers and a decrease for the indies it would be such a shame. Everyone who I talked to agreed that the indies were the real winners. It was still an awesome weekend, and I met a bunch of awesome people. PAX is a great thing for Australian gaming, and hopefully will continue to be.