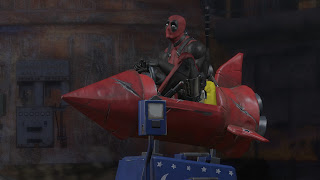 If you were to ask me what makes Deadpool so popular I could try to explain his love for breaking the fourth wall, his lust for women, or his never-ending hunger for chimichangas. Or, I could show you his video game.

Deadpool, the mercenary with a mouth wants to star in his own video game, and so he asks for help from High Moon Studio (the developer behind the game). Along with hanging up on Nolan North (who voices Deadpool) he is sent a script, which he ultimately re-writes for himself. In the process of blowing the budget, Sinister is brought into the fray who must be defeated by Deadpool.

Now I haven’t read any of the Deadpool comics, so my knowledge of Deadpool only comes from what I have read on the Internet. Even without knowing a lot though, I cannot think of a time prior to picking up Deadpool that I have laughed so much at a game. It’s hard to explain what makes it so funny. It might be the flying cows, slapping Wolverine across the face, or the moment that Deadpool has been put in a Zelda-like top-down dungeon crawler. Most of it comes from the fact that the developers aren’t afraid to make fun of themselves and the gaming industry. It’s fast and witty. It’s great. 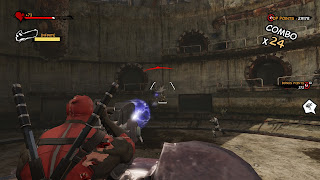 Humour aside, where Deadpool fails to hit the mark is its gameplay. It’s repetitive brawler where you move from one room to the other fighting goons that all look the same. You start off with two weapons; swords and a handgun and you slowly build up enough points to unlock other weapons. The sais are fast-moving and will help you build up combos quickly while hammers are slow but they hit hard. There is also a machine gun, a shotgun and even bear traps up for grabs. There is enough there that the combat should have been diverse and varied and although the end product is too repetitive for its own good there was enough depth to keep me interested when I started to play with the combos. Switching between gunplay and swordplay is also executed well and players won’t feel reliant on one or the other.

All that said, what really pulled me through the combat was the knowledge that it was going to be something funny on the other side that had nothing to do with the combat. Sadly, most of the platforming sections of the game are also pretty poor. Pickups are used to guide the play through the levels in a nod to the lazy game development tricks of the past. Despite that most obnoxious of hand-holding techniques, there were also a few times in the more open areas that I got lost. It was also really disappointing to see a lack of diversity when it came to the environments. One would think that if you were an insane mercenary coming up with your own game you would add in locations that looked vastly different to the one you had just been in, but no, Deadpool would not cut it as a real game developer, I fear. 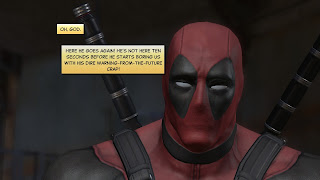 At some points in the game, you will team up with Deadpool’s on-again off-again sidekick Cable, as well as running into some of the X-Men. As each character is introduced in the game you can perform a QTE to get background on that character. That bit is a nice nod to the Marvel universe, at least.

I played Deadpool on PC and had the settings on max, and while it looked good it it’s the kind of good from a few years old. The presentation is improved substantially by Nolan North does an amazing job of voicing Deadpool. If the guy ever gets a shot at being in a film again, let’s recruit North rather than Ryan Reynolds, yes, Hollywood?

I do hope there’s a sequel for Deadpool. The gameplay can easily be improved but then again, it’ll be hard to come up with a sense of humour and script that tops this one. Also a warning to those without a PC to play on, the game is half the cost on PC than on the console counterparts, and it’s hard for me to think of paying the console price for this game no matter how much enjoyment I got out of it. But given the price I paid, the fun factor completely mitigates the gameplay’s problems.

Show report: The first-ever PAX Australia. The first of many (we hope)